Among the Disappearing Islands of the Chesapeake 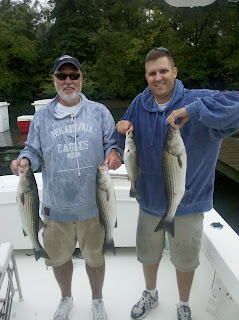 Yesterday I fished the Bay again with Major Ski but this time with his father, pictured here and Lou, the Mad Russian as well. Ski's father is my age and clearly enjoys fishing but is not as fanatical about it as the other four men who were on guide Capt. Pete Dahlberg's boat.

On this trip as well as the Chesapeake outing with Capt. Brady earlier this month, much of the time was spent on the opposite side of the Bay from our launch at Solomons Island. Brady Bounds displayed a huge amount of knowledge of the physical and social history of the islands along the Eastern Shore which are shrinking and disappearing into the Bay as water levels rise. Unlike Brady, Capt. Pete did not grow up in Bay Country but in Upstate New York near where I was born. Nevertheless, in learning to fish and guide in the Chesapeake he has learned a lot and took us to one of the most interesting areas, Holland Island. Author Tom Horton has written of stopping to play with island children when he was ten and on a fishing trip with his father:
http://www.chesapeakelifemag.com/index.php/cl/travel_article/tr_hollandisland_ma06/

Now only a lone, long abandoned house sits as evidence that this was once a thriving community with its own baseball team. Odd to be fishing in waters where the ruins of old roads and buildings lie beneath the surface, but the catching was good and we all went home with rockfish and speckled trout to eat. Temperatures were in the high 60's and it rained from the late morning to our return to Solomons in mid-afternoon. Thanks to Lou Sagatov for the picture.
Posted by DJones at 11:25 AM No comments: 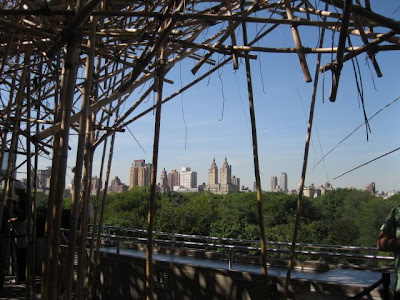 Visited daughter Rebecca for two days. She's in grad school at NYU but could take some time off to walk around the Upper East Side with us. Most memorable site was this art structure on the roof of the Metropolitan Museum of Art created by two artist brothers from Jersey who supervise a group of rock climbers lashing together thousands of bamboo poles. 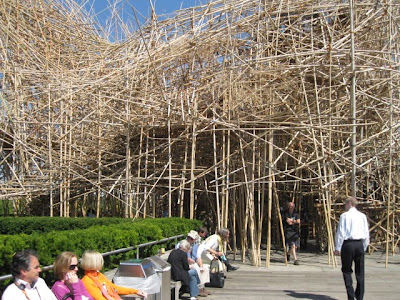 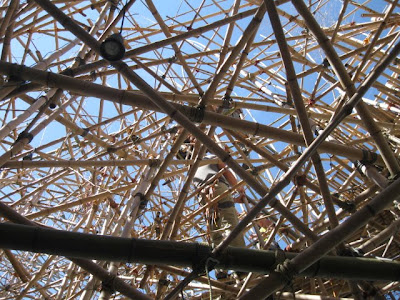 With Major Ski and Capt. Brady on the Bay 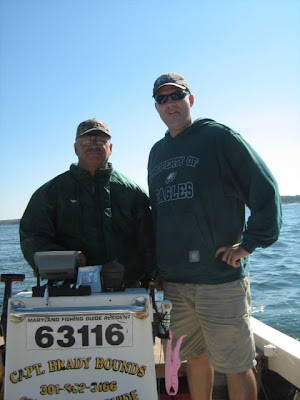 Ski is a US Army Major and Brady Bounds is a Chesapeake Bay Captain and Guide out of Solomons Island, Maryland. Ski will be going on his second tour in Afghanistan in a few weeks, and our country is fortunate to be served by such an intelligent and good person.

It was beautiful out on the water but windy. We motored over to the Eastern Shore, and Ski caught the first fish, a small striped bass. I think he caught a couple more before I landed a small bluefish using a fly rod. I hooked and lost a couple and then didn't catch anything while Ski and Capt. Brady regularly brought fish into the boat, some of the fish pretty good size. Brady pointed out that with the fish holding on the bottom the fly rod wasn't an effective tool. In addition, I wanted to learn to jig, so I switched to a spinning rod. While learning the basics of light tackle jigging over the next couple of hours, I was the only one not catching.

After refueling in mid afternoon, we ran back to the Western Shore where Brady once again put us on fish. There I got a couple of blues before coming in.

Had a good time and learned a few things.
Posted by DJones at 7:03 PM No comments: 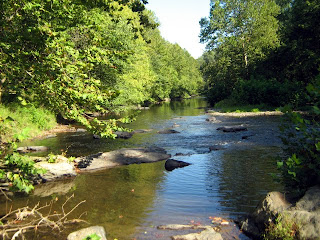 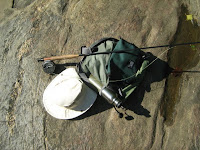 At Dogwood Road. Bass and bluegill were all small. Used only the B & B.

I stashed my gear on a rock while I took a break. 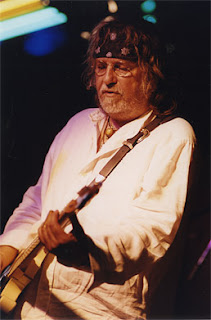 "It ain't something you control.

It's live and die rock and roll."

Those words are from the Ray Wylie Hubbard album Snake Farm which I listened to on the way to the Upper Potomac yesterday. This is one of those songs with a rhythm so driving and a hook so catchy, you've got to move when listening. Other lyrics from the album give us some insight into his theology:

"Well, I never thought to ask him, but the thought seemed mighty slim

And on sexual situations:

"She comes to bed in a negligee just to discuss cinema verite."

This picture of him is not mine, by the way.

Excellent day catching smallmouth bass and big bluegills mostly on Lefty's Red and White Streamer, but the fish were so aggressive many other flies probably would have worked as well. The tip broke off my 7 weight fly rod, but it didn't interfere with casting much. I'll speak to the folks at Temple Forks Rods about their lifetime warranty. All the fish were caught at the point behind Noland's Island.

Weather was beautiful. Temps in the 70's, and the water level was .73 at Point of Rocks.
Posted by DJones at 1:07 PM No comments:

Don't care for them. On the Patapsco today, I saw two, or maybe the same one twice. In both cases, they were two or three feet away in the water I was wading. I'm not one of those people deathly afraid, but I'm not wild about them even if they're not poisonous. These almost certainly were not.

Home improvement people were keeping me home, but they all left at once so I managed to salvage the day by fishing water down from the Old Frederick Road bridge, a stretch of the river that I hadn't gotten around to. In a barely a couple of hours, I caught a few bluegills and a bass, mostly on a bullet head deer hair surface fly. A few years ago, I tied up a number of them when I was enamored, for some reason, by bullet head deer hair flies.

Getting back to snakes, we haven't seen any in the yard lately. Pam's deer fence caught a couple a year or so ago, and maybe they were the breeding pair. Good riddance.

I'm planning to fish that part of the Patapsco again soon, snakes or no snakes. Water level was 1.21 at Hollofield.
Posted by DJones at 6:54 PM No comments:

Driving to Lander, Listening to Neil

Good traveling music, Neil Young's Live at Massey Hall 1971 which was released a few years ago. Although he was about 26 when he wrote these songs and gave this concert, it's funny how often the word "old" appears in the lyrics, not just when he means someone else, an "old man", but even when he's talking about himself: "Now I'm getting old..." If you thought that at 26, Neil, now that you're almost 65, what do you think?

To me, Neil Young's lyrics are like Bob Dylan's. Sometimes they miss and sound silly, but when they're on target, and more often both are, they get under my skin in a way I find hard to express. At those times, their words haunt me.

Unlike Brunswick, a few miles up the Potomac, and Point of Rocks, a few miles downriver, only fishermen mention Lander, Maryland which is little more than a few houses and a railroad crossing near the river. Lander is also the site of a C & O canal lock, number 29.

It was a beautiful day with blue skies, the temperature in the 80's, the humidity low, and, most importantly, the smallmouth bass and bluegills co-operative. Most fish were caught on a surface slider, but the best bass came on a B & B. All the bass were caught above the first ledge. 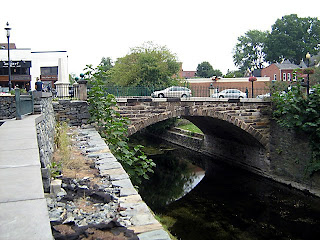 Walking around this famous DC neighborhood today brought back many memories. I remember my hippie girlfriend bringing me here to get sandals in the 60's. In the 70's I remember seeing many musical acts at the Cellar Door at 34th and M streets. In the 90's I remember showing my son the joys of browsing in record stores that were still numerous in the area. They were generally selling CD's by then, but I'll always think of them as record stores.

Since the Chesapeake and Ohio Canal runs parallel and nearby sections of the Potomac River that I fish, I thought it appropriate to take a picture of where the canal officially begins. A white monument noting the beginning of the canal appears on the left side of the above picture. There once was a fly fishing shop near here, and some avid flyfishers fished for carp in the canal. Maybe some still do.

Having lived here all my life, I have associations of personal events, big and small, often when I visit areas around DC. Few hold as many past images in my mind as does Georgetown.
Posted by DJones at 3:57 PM 2 comments: