Named after the 17th century author of The Compleat Angler, the Izaak Walton League is an organization of fishermen and hunters involved with conservation activities, and I recently became a member of a local chapter. 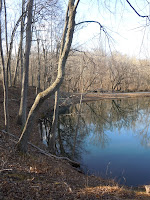 ut a half hour's drive from my house, the wooded grounds and pond are a wild oasis in the suburbs. On a couple of mild days during the past week, I've caught a few bluegills. Any fish caught in February is a treasure.


There are the usual cast of suspects of wildlife to observe: 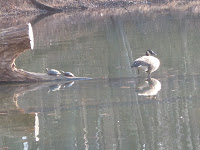 This annual get-together of fly fishermen from Maryland and adjacent states was held on Kent Island yesterday. Attendees wander through tables where expert fly tiers, like the one pictured below, are passing on tips and answering questions as they work. 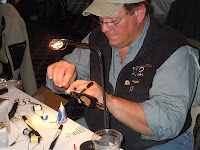 Even in mild winters like this one there's not much fishing, and the event is a nice time to renew friendships, eat, drink, and socialize.
Posted by DJones at 1:43 PM No comments:

Hannah died two years ago at 67. I recently read his semi-autobiographical first novel, Geronimo Rex, and enjoyed it very much. He was Mississippi born, and although it's a lightly populated state there must be something in that soil that produces so many writers, blues singers, and pro football quarterbacks.

Looking around the internet, I found an interview that Hannah gave to The Paris Review a few years ago, and this passage caught my attention:

Those thoughts brought to mind what I liked best about his writing: it's the lyricism and rhythm of his prose. His love for music shows in his writing. Once I heard a lecture from poet and novelist Erica Jong who said that before she sends a book to the publisher she reads it aloud from beginning to end because her writing has to sound right to her ear.

I think that much of the writing I most admire has a pleasing, musical sound to it. I was generally a mediocre musician, but nobody appreciates listening to music more than I do. Similarly, I may never be any better than an adequate writer, but I sure enjoy and appreciate reading good writing, especially writing that reflects a love of music the way Barry Hannah's does.
Posted by DJones at 1:25 PM No comments:

Friday I drove down into Charles County to scout a fishing location along the tidal Potomac. Mallows Bay is best known for the large number of shipwrecks, some that rise above the surface and are visible from shore and others that lie underwater but are clearly visible from boats. 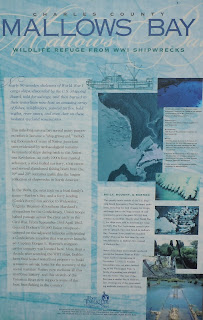 The area at Wilson Landing is now a park which provides recreational opportunities, nature views, and historical information. Most of the boats were hastily built on contract by the government for shipping in support of the WWI war effort, and they were later scrapped.

I thought this was an interesting looking tree near the boat ramp. There is also a floating dock for kayaks.

Some of the wrecks are out in the main area section of the river. 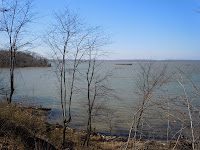 Others are back in the tidal creek. 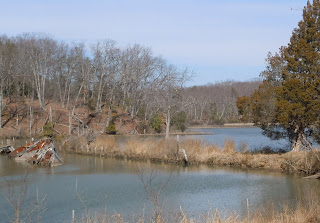 This is the one most visible from shore. 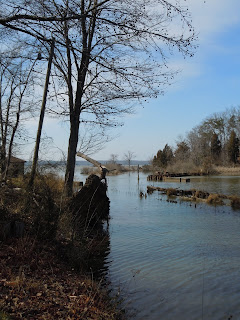 The link below contains the full story of "The Ghost Fleet of Mallows Bay":


http://www.dnr.state.md.us/naturalresource/winter2001/ghostship.html
Posted by DJones at 10:23 PM No comments:

As a baby-boomer, the first TV generation, I've been watching movies on the tube since the 50's. Of course, it's a different experience than going to the theater, not necessarily better or worse, but certainly different. It might be better to fully appreciate a great film in the isolation of a darkened theater, but a mediocre movie is easier tolerated at home.

Television introduced me to some classic movies that I eventually saw on the big screen; Citizen Kane, the original King Kong, and Blade Runner come to mind. The accessibility of TV has also enabled me to repeatedly enjoy what I consider great scenes in less than great movies. A recent example is Meryl Streep's "hire the smart, fat girl" speech in The Devil Wears Prada, but there are many others. There are also movies that I think of as having seen many times but eventually realize that I've never seen the actual beginning until I happen to catch the whole thing.

Then there is the topic of buying favorite movies on DVD, VHS, or whatever is the popular format of the time. The Big Lebowski, and National Lampoon Christmas Vacation were thoughtful gifts from our children, but they've been watched many fewer times than when they've shown up on the channel rotation. It's possible that we've never watched The Godfather Trilogy in a box DVD set which was a Christmas gift six or seven years ago, but Pam and I will watch at least the first two anytime we spot on the TV listing and we're available.

We are not alone in this behavior, apparently. Not long ago, I heard Steve Van Zandt discussing his sometime occupation of disc jockey (along with musician and actor) on his satellite radio channel. He rhetorically posed the question of why middle-age people who owned a huge amount of rock music on record, tapes, and CD's still listened to disc jockeys on the radio. "The same reason you seldom watch movies you own, " he said, answering his own question. "It's the element of surprise of hearing the song or seeing the movie at a random time when a disc jockey or TV station chooses them."

That's the best explanation I've heard.
Posted by DJones at 12:06 PM No comments: 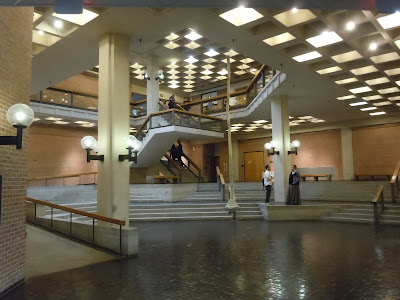 The "Wood, Paper, Fiber" exhibit is currently being shown in the gallery in the Art and Sociology Building. I really like the interior of the building which is pictured above. 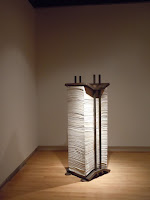 Drew Goerlitz: "Propositum III" He's a Maryland graduate, and all his works shown in this exhibit are made from steel and paper. 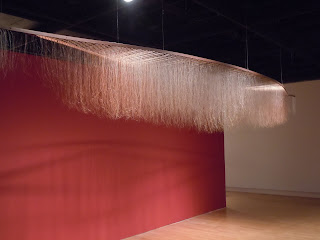 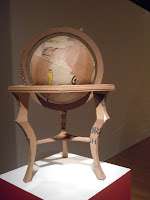 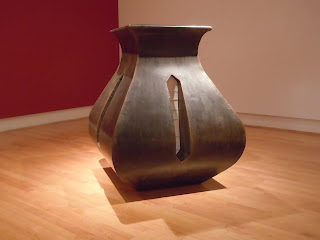 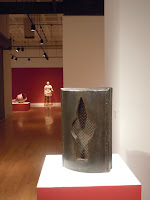 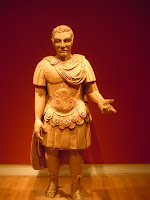 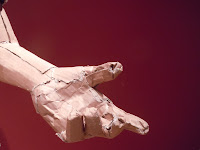 Close-up of the cardboard materials:

I feel that way about this untitled work by Aeneas Wilder of Scotland: 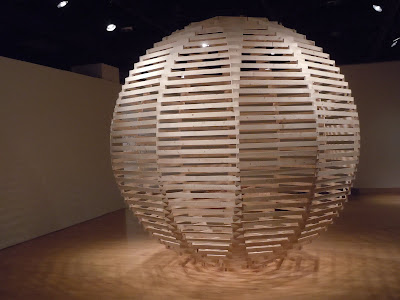 The Magothy and the Severn are tidal rivers that empty into the Chesapeake between Annapolis and Baltimore, and their upper tidal sections are only about five miles apart in Anne Arundel County.

Winter fishing for pickerel can be good in these areas, so yesterday I decided to take advantage of a 70 degree day to drive to a place on the Magothy where there is public access. Before leaving on a fishing trip, I write my destination on a white board in our hallway, and there I wrote "Severn River near Severna Park." It had been six or seven years since I fished the area, and it wasn't until I reached Severna Park that I realized my targeted fishing site was on the Magothy rather than the Severn. Fortunately, it didn't take long to make the correction and soon I was wading and casting.

Everything was perfect: I had the appropriate fly tackle, my casting was fine, and the weather was beautiful with the warm sun light only occasionally blocked by passing clouds and the breezes not over-powering. The fish, unfortunately, did not co-operate. Brought out by the mild weather, there were some bait fishermen there as well, and they didn't seem to do well either but those that I talked to on walks back to the car agreed with me that being able to be out fishing on the first day of February was prize enough.

As we anglers say: the fishing's always good even when the catching is not.
Posted by DJones at 10:47 AM No comments: