Have seen it a number of times and watched some of it today. Many of the scenes reminded me of when I worked part time in a record store in the 70's. Although we were not rude to customers the way the guys in the movie sometimes were, my co-workers and myself looked down on many of them because we were snobby about our tastes in rock music.

The main character reminded me of myself and other guys I have known because of his romantic ups and downs as well as his often erroneous perception that he was the one who was wronged. His obsession about the sex in his relationships with women is probably true of men in general, but probably not all men hear an on-going soundtrack in their lives like the main character and I do. However he explains and describes his life almost solely in terms of music, and I don't do that.
Posted by DJones at 3:38 PM No comments:

My wife is 23 days older than me although she looks about 23 years younger (and I am not kidding), and the period between our birthdays is unsettling to her. Were we to make the news as a couple during these 23 days, which is unlikely but possible, her age would be listed as 63 and mine as 62. She wouldn't like that. 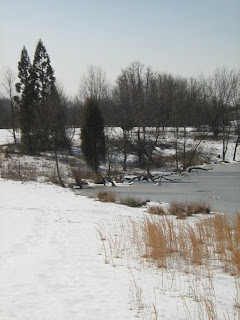 This is the snowiest winter on record in the DC area. That's all I'm going to say about it. Since the weather has been the main topic of conversation recently, I'm weary of talking about it. Instead, I'll talk of the books I've been reading while snowbound.

Duane's Depressed is to me the centerpiece of the series of five novels McMurtry has written which take place in the fictional town of Thalia, Texas over about 50 years. Duane is the character played by Jeff Bridges in the movie The Last Picture Show that was based on the first novel of this series, and he is the protagonist of the books that came later. The second, Texasville, was also made into a movie using the same actors, but was not nearly as successful as The Last Picture Show. I haven't seen that movie, but I read the book probably about 15 years ago. I stopped reading Duane's Depressed to reread Texasville to clarify some of the characters in my mind before resuming Duane's Depressed.

McMurtry has written other novel series that feature the same characters, and I once heard that he thought of his characters as if they lived a parallel existence and that when he was ready to write another book about them he would check in on them periodically to see what they're up to as if they were in another room. I have the sense that he wrote the last two books of the Thalia, Texas series to quickly wrap up Duane's life. Although I enjoyed these two novels which take place after Duane's Depressed, I found them less substantial.

Thalia was based on the town in which McMurtry grew up, and the character Duane who is about 18 in the first novel would have been born about the same year as the author. Duane differs from the author, however, in that Duane's education ends with high school, and he lives his entire life in this small West Texas town where he prospers as an oil man.

In the novel Duane is my age, his early sixties, but has even less in common with me than he does with his creator. A large metropolitan area in the East differs drastically from a small Texas town, and I know nothing of the oil business in which Duane made much more money than I ever did in my jobs. Additionally, he is of another generation than me, and the changes in America life impacted me differently as 11 years his junior in real years. Like me, Duane likes to fish, but unlike me, reading, music, and movies don't play a major role in his life. He grew up poor with parents who died young, then served briefly in the army (stationed in Texas), and married and started a family at a younger age than I did. In short, I had many more educational and cultural opportunities than Duane.

These lack of opportunities, in my opinion, played an important role in Duane's life crisis that forms the basis of the plot of Duane's Depressed. His success in business has led to many material acquisitions- big house, multiple cars, etc.-so many that he suddenly sheds them and retreats to a simple one room cabin. To the bafflement of his family and neighbors, he refuses to drive or be driven and walks or bicycles everywhere. As he walks or bikes or sits in his cabin, he thinks about how little he knows of the world and how narrow his life is. Although he loves his wife and children, they do not provide consolation for all the things he feels he has missed in life.

Duane's sudden change puzzles and maybe even frightens the town because he had always been a leader and stable presence. He worked hard for his business success and although he didn't seek his role as a community leader he accepted those responsibilities and carried them out with decency and honesty and without complaint. To the residents of this small town, he is their natural leader. "We're kind of their royalty, Duane," his high school sweetheart explained to him as he was confused by the wild cheering as they rode together in a pageant float in Texasville. She briefly returned after leaving Thalia to become a movie actress, but despite the passing of 30 years she and Duane were still the pretty homecoming queen and the handsome captain of the football team to the townspeople.

Did McMurtry base the original character of Duane on himself and go on to speculate what his own life would have been like had he remained in his native town? I don't know, but when reading these novels I find myself wondering what it it would be like to grow into middle age and beyond surrounded daily by people who had known me all my life. I live a short distance from where I grew up, but I rarely run into school mates although many of them have also remained in the area. There are so many places to work, eat, and shop in the suburbs of a big city but not in a small town. Had I lived my life in a place like Thalia, every day I would see older neighbors who would remember me wetting my pants as a toddler, women who could recall my shy sexual fumblings as an adolescent, and younger men who may perceive that they have surpassed me as a businessman, as an athlete, or as an outdoorsman and are amused to think that they once looked up to me.

With everyone knowing everyone else's biography, there are fewer secrets in Thalia. The people there are a randy lot, and Duane has had a few affairs that he doesn't express much guilt about. His affairs are not a secret to his wife, Karla who has had a few dalliances herself, and her first reaction to Duane's leaving their home for the cabin in Duane's Depressed is to assume he's meeting another woman there. Unlike her husband, Karla expresses her emotions immediately and directly, so she is loud and clear about her jealousy concerning other women. Duane is as silent as Karla is talkative, and his reticence has always un-nerved her. At one point, she explains their sexual differences by saying she loves to flirt but is generally all talk while Duane isn't very good at dodging women who throw themselves at him.

From his other novels, I've always felt McMurtry liked to create strong, colorful female characters, and Karla is in this mold. She is a beautiful woman who retained her looks as she aged. She is lively, energetic, and funny, and her outrageous but honest comments provide much levity to the series and sometimes scare the male characters. The main conversation among the townspeople is about one another, and Karla provides a lot of material.

Duane and Karla's children also are invariably in the town's spotlight. They are good looking like their parents but are often wild in their behavior. By the period covered in Duane's Depressed, some of Duane and Karla's children have children of their own, and much of the burden of raising them falls on the grandparents. Despite their problems, however, Karla and Duane love and depend on one another.

Although this post is dated as of the date I began it, I have actually written it over four days, and during that time I read the first book of the novel series, The Last Picture Show. I had seen the movie but hadn't read the book before, and as I expected the movie was faithful to the book. In contrast to the other four books, The Last Picture Show is more about Duane's best friend Sonny than Duane. In the subsequent novels Sonny also remained in Thalia, so I find it interesting that McMurtry chose to focus on Duane after The Last Picture Show. The later books certainly present a fuller picture of Duane's character, but many of us are not fully developed personalities when we are seniors in high school. However, I have know some people who were.

Besides being entertaining reading, these books caused me to reflect on my own life, and I guess that's why I've had a fair amount to say about them. Each novel stands on it's own, so it is not necessary to read them chronologically or all of them. The characters and the major events are consistent among the five books although McMurtry sometimes changes details. In Texasville, for example, it is mentioned that Duane's father died in World War II, but in Duane's Depressed, the author writes that he died in an oil rig accident. Hey, they're his books, so he can do as he wishes.
Posted by DJones at 1:10 PM No comments: