A holiday so nice, we celebrated it twice

As been our habit in recent years, we had Thanksgiving dinner on Thursday, the traditional date, with my sister Elaine, her family, and her in-laws. Then on Friday Pam and I drove 3 1/2 hours to her sister's house in Gormania, West Virginia. After visiting for a couple of hours there with Kathy and her husband Bernie, we all piled into one car and drove across the Potomac River back into Maryland, then over Backbone Mountain to our niece Sarah's house where we ate a second Thanksgiving dinner with Sarah, her husband Kevin, and their three children.

For Pam and myself, it was our 40th Thanksgiving together, our relationship having begun in November, 1976. At that time, her grandfather was living in the house in Gormania, and we visited him when we were camping in the area so I've had an attachment to that small town since. During a walk I took before driving to Sarah's, many memories of previous visits came back to me.
Posted by DJones at 12:58 PM 1 comment:

From the book Billie Holiday, The Musician and Myth, by John Szwed:


"Jazz is an interactive music, one of the most complex of all human musical interactions. When saxophonist Ornette Coleman said that the difference between rock and jazz was that in rock everyone is playing with the drummer whereas in jazz the drummer is playing with everyone else, he struck at the heart of what is special about interaction in jazz. There is a pulse, a rhythm, a subdivision of time at work in well-played jazz, but one that can be manipulated and adjusted by each player such that the rhythmic expectations of both musicians and audience are surprised. Jazz is the sound of surprise."
Posted by DJones at 4:08 PM No comments: 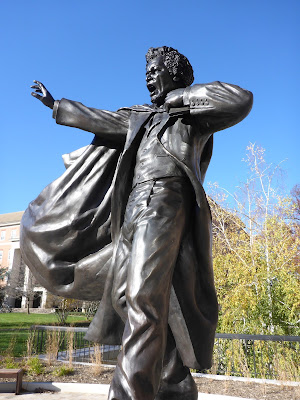 Born a slave in Talbot County, Maryland, Frederick Douglass fled north to freedom and became a dedicated force for abolition and the rights of all. Wednesday was the unveiling ceremony for this statue in a prominent plaza of the university. I was there for the ceremony, but I couldn't get an angle for a close-up so I came back today for the picture above.

Pictured below is a portion of the crowd at Wednesday unveiling:

Although there were a number of speakers, including two direct descendants of Douglass, the highlight was the University Gospel Choir. Their voices briefly brought out the sun on what was otherwise a dark sky. 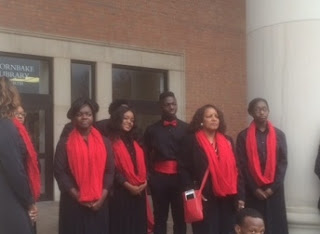 Tonight was the 10th of this annual event, and I've been to most of them.  Topic was "Sports Writing Then and Now," and most of what was said could apply to journalism in general, not just sports. "Then" was defined as before the internet, social media, and cable TV replaced daily newspapers as the main sources of information. 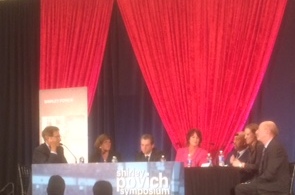 When I was growing up in the 50's and 60's, there was a common perception of generational progression, that I and my peers would be better off and have more opportunities than our parents. This assumption of progress goes back to America's founding as a quotation from John Adams shows:  "I am a revolutionary so that my son can be a farmer and his son a poet."

History as progress has not been universally accepted.  Some Eastern cultures see history as cyclical while Medieval Europeans viewed history linearly but as proceeding towards a Biblical end-time. As a history major in college, I began to question my assumption of historical progress and to particularly question whether humans ever made any moral improvement. These were years not long after the Jewish Holocaust and the other horrors of WWII, and seeing any moral progress in the face of these events was discouraging. The best I could do was to rationalize that humans were no worse in behavior now than in the past but that technology provided means to kill on a larger scale. Since then, a greater knowledge of the damage industrialism has inflicted on the environment calls the desirability of even technological progress into question.

This history teacher is skeptical of idea of progress: "So-called forward movements of civilization, whether moral or technological, have invariably brought with them an accompanying regression" and he cites examples such as the spread of Christianity as causing "wars, butcheries, inquisitions, and other forms of barbarity" and the invention of the steam engine leading to the "miseries of industrial exploitation and to little children working sixteen hours a day in coal mines." He touches on the Great Man and cyclical theories of history but not on economic determinism, but this is a novel not a textbook.

Americans, I am told, are increasingly doubtful their children will lead lives as good as theirs, and the United States is falling behind many other countries in terms of social mobility. It's hard to retain the optimism of historical progress, generational or otherwise.