Colorful entrance to the house

Pam is responsible for making entering the house a colorful experience. 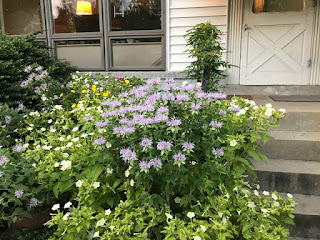 Bee balm and four o'clocks are the predominant plants.

Caught a nice bass and hooked a snakehead

Fished yesterday evening with Capt Mike and Col. Ski at Mattawoman Creek off the Potomac River. 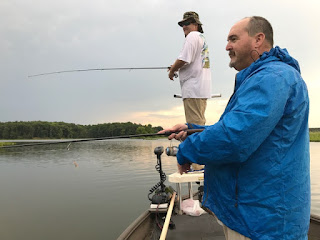 Although the water contains some excellent bass, Ski really wanted to catch a snakehead which have become for many a desirable game fish. In previous trips with Capt Mike he had hooked a few and landed one. He wasn't having much luck on this trip, but I caught two largemouth bass and hooked and lost a snakehead. Now I understand the appeal of snakehead fishing because the drama of the hit and the excitement of watching the fish leap was memorable.
Fortunately, Ski eventually hooked and landed a snakehead.
Below is the larger of the two bass I caught. 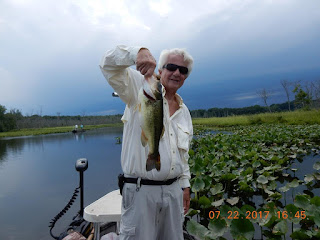 We got rained on for about twenty minutes shortly after this picture was taken. Then he cleared up, but I drove through a violent thunderstorm for much of the way home.
Posted by DJones at 11:48 AM No comments:

This is turning out to be the summer of taking photos of the pond. Here are two more from the past week. 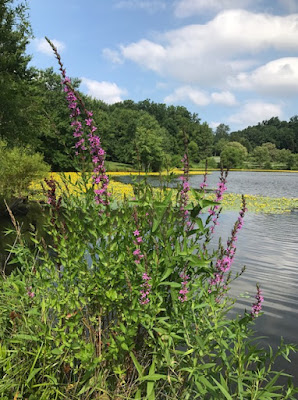 This next one shows a sky similar to one I shot a few weeks ago. 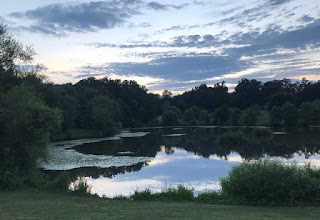 Posted by DJones at 7:58 PM No comments:

A fishing lesson and an unusual drive home

The fishing lesson was from the charter captain, Capt. Pete, on a trip I took with him and my friend Col. Ski last Friday. There is a basic fishing technique called jigging which I've never felt I was doing right. One reason that I never learned it properly is that the situation comes up with me rarely. There were times Friday, however, when there were masses of rockfish right under the boat, a situation that clearly calls for jigging a lure straight down. Capt. Pete saw that I was allowing too much slack in the line which didn't allow me to detect a strike, and once I got the hang of that I started catching more fish. We caught a lot of fish that day, but they were all just below minimum size. Still, it was a good day.

On the way home from the marina on the South River, I drove into maybe the biggest downpour of my life. Many drivers along Route 50 pulled over to the side of the road because the visibility was so poor. Twice, I pulled over, but I decided I felt safer driving along at 20 mph rather than sitting along the side of the road. Just before the Capitol Beltway, however, I saw blue sky ahead, and when I reached the Beltway it was completely dry. It was dry as home as well. The next day the newspaper described that areas of DC flooded in the heavy rain, so the stormed apparently passed to the south of our home.
Posted by DJones at 7:43 PM No comments: 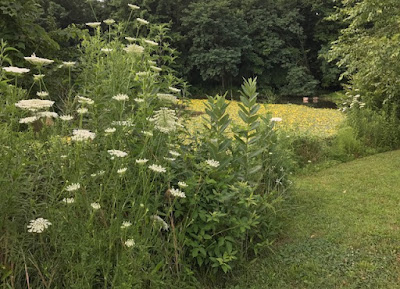 Recently in our yard I mistakenly identified yarrow as Queen Anne's Lace, so when I saw similar plants in the park I wasn't sure which they were. Last night Pam went with me, and after looking closely at the plants she pronounced them as Queen Anne's Lace.

The pond on another summer evening

Last night from the same spot as a week before, on June 25. Nature's light always paints a different picture. 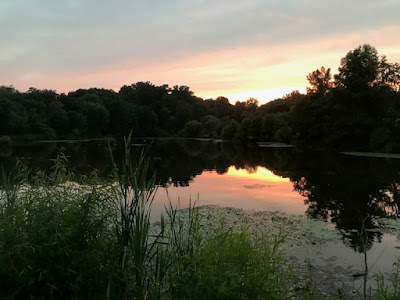