Four or five trips, all to the pond except Friday, May 11 to the Patapsco where I caught my first smallmouth of the season.  Other than that, it's been all bream.  Been using sponge spiders the past two days.  I'm catching on every trip because on the shallow end of the pond it's pretty much a sure thing this time of year.
Posted by DJones at 4:29 PM 1 comment:

Tuesday at the New York University's Institute of Fine Arts.

Short but pleasant trip to the Apple.  Good dinner Monday night in Brooklyn and lunch Tuesday on the Upper East Side. 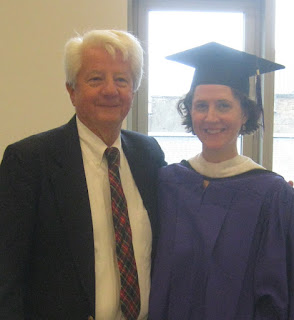 Father looking all of 65 years and daughter a lively 28 years.
Posted by DJones at 12:20 PM No comments:

May Fishing, so far

Have been out four times and caught fish on each trip.  Two were short trips to the park pond, and I caught only a few bluegills.  Best day was yesterday at the pond when I caught two rainbow trout, one largemouth, and 6-8 bluegills all on an olive marabou streamer.

Only other notable trip was last Wednesday, May 2.  That afternoon I walked over to fish the pond  and realized that it was in the process of receiving another stocking. As I watched, I began a conversation with the guy who appeared to be heading the crew, and he told me at their previous stop they had put in a couple of 10 pounders.

Now, how many times in my life am I going to have a shot a 10 pound rainbow trout? And at a 10 minute drive from my house? As I drove my brain starting working: Should I have exchanged the five weight fly rod for something heavier? Should I go back and get a net? Was the guy who told me the story having a good laugh with the rest of the crew about my gullibility? What the hell, I'll press on.

Northwest Branch goes under Route 29 at the fall line, and the stream descends very rapidly through a series of falls and rapids. It's an amazing sight for just outside the Beltway, and between the fast water there's some fairly deep pools. There were a couple of fishermen there including a guy my age with hip boots and a spinning rod who I thought I had seen at the park pond as it was being stocked.

Yeah, I saw some stocked trout swimming around in confusion, but none looked anywhere near 10 pounds. I fished for a couple of hours and didn't catch any of them. Oh yes, I did catch an 8 inch bluegill. Not for a second did I think I'd hooked a monster trout.
Posted by DJones at 12:38 PM No comments: