The Ocean and the Passage of Time

During my walk this morning, I thought about what I wrote Sunday about last week at the beach and speculated that there is something about the shore that is conducive to reminiscing.

The two beach houses pictured were not the only ones that our family once vacationed in that I made a point of walking by, and when I did I thought back about those past visits.  Stores in Bethany Beach also bring back memories of the past 27 years of vacations there.  When I'm near Rhodes 5 and 10, for example, I find myself remembering being in that store when the kids were small and were allowed to pick out toys to play with at the beach.  During my normal routine at home I seldom have those kind of thoughts.

This reminiscing is not just the case of an old man looking back because there is more to his past than to his future.  On one of our first beach vacations, I walked through the town at night and thought back about the summer I spent on the Jersey Shore 20 years before, and I was barely 40 when I was doing that reminiscing.  No, I think there is something about the ocean that summons up such images.

Maybe it's the steady pounding of the surf like the ticking of a clock that make us think of the passage of time.  Also, there is the movement of the sun.  During a typical day at the beach, I set up the umbrella in mid-morning and find myself moving my beach chair to stay in its shade as it moves as the day goes on.  I'm like a human sundial.  In writing about the importance of rhythms last Fall (http://writings-djones.blogspot.com/2013/11/the-beat-goes-on.html), I mentioned that during beach visits I try to get into the rhythms of the tidal changes.  The pounding of the surf against the beach and the rise and fall of the tides- they both mark time.  Maybe these rhythms click in our minds and make us think of times past.
Posted by DJones at 9:29 PM No comments:

Early in the week my feet display a distinct tanning pattern brought about by wearing Teva sandals all summer.  During the week I wore flip-flops or went barefoot, so the pale parts of my feet got a little burned. 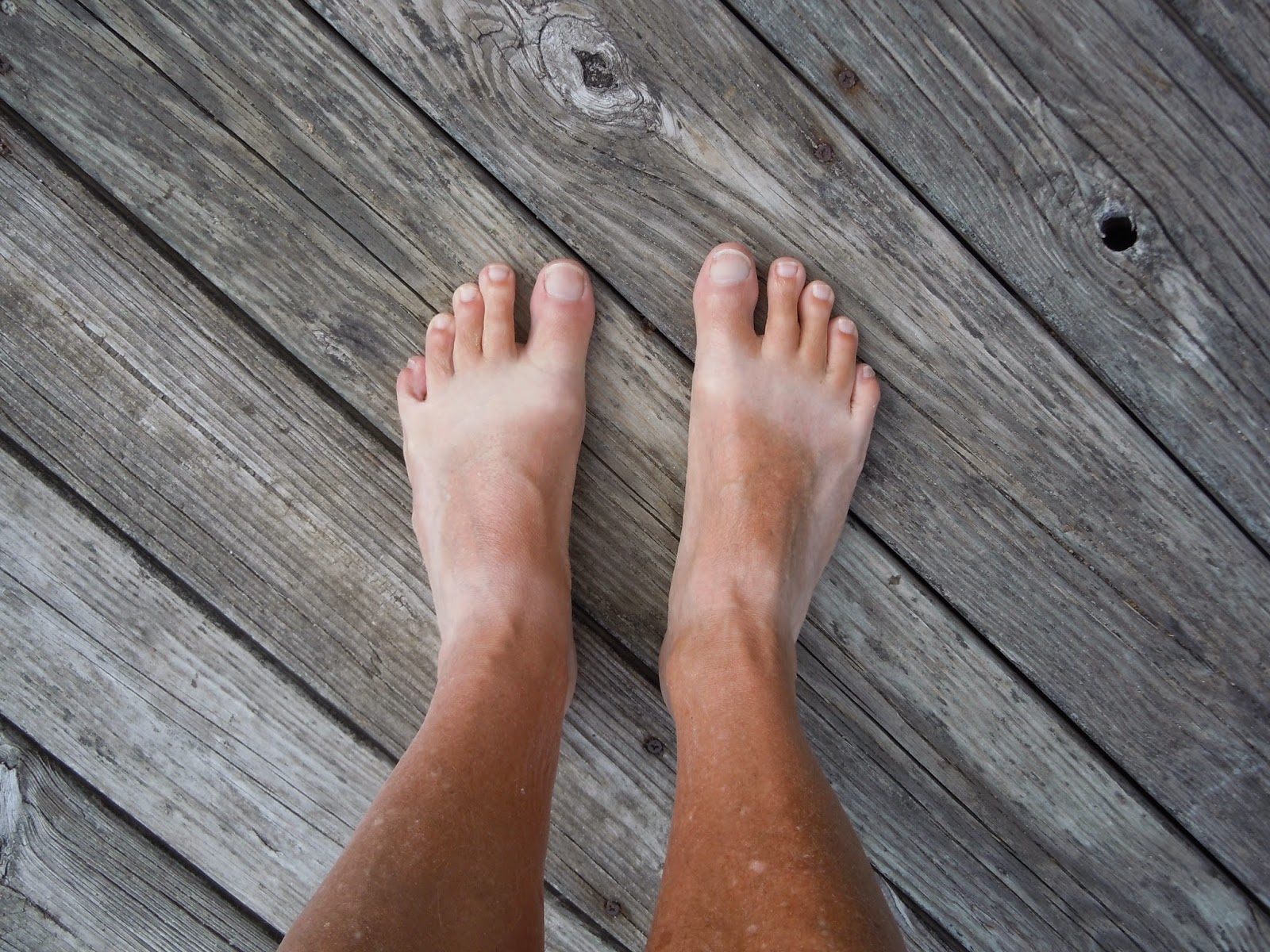 The City of Bethany Beach has made a park at the end of the loop canal. 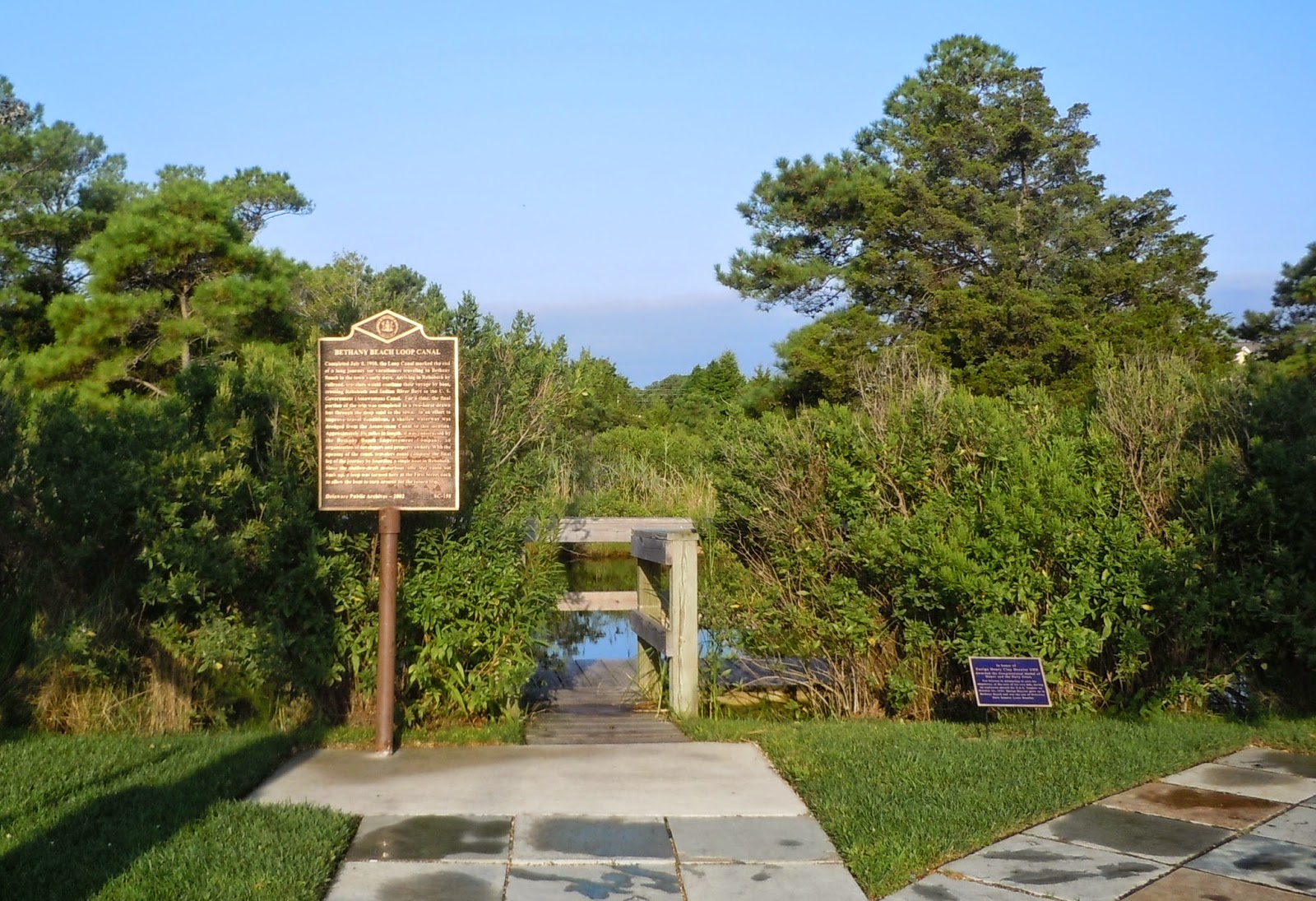 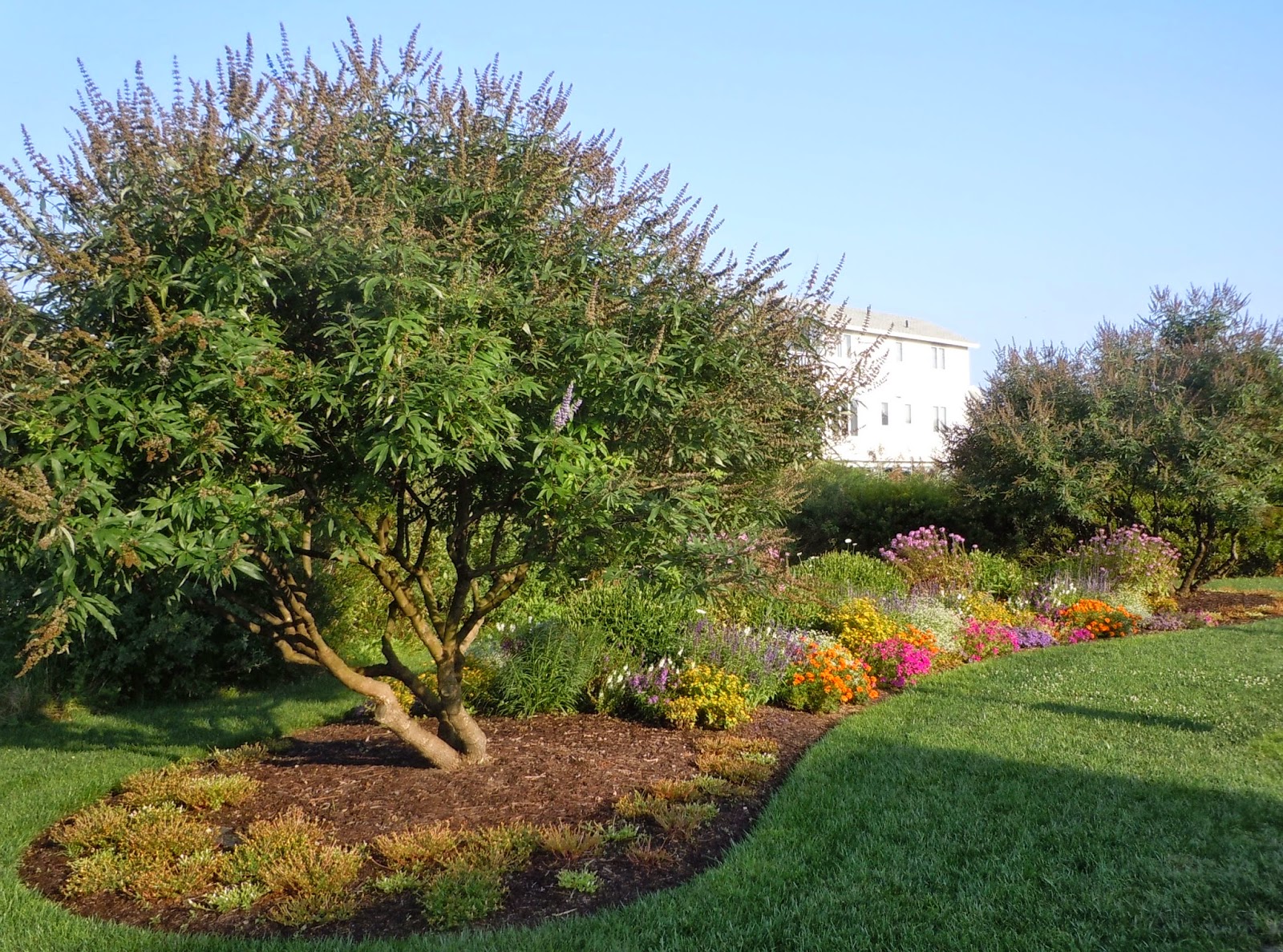 About 25 years ago, we stayed at this house on the canal.  Although I enjoyed being able to crab from the dock and watch the wildlife on the canal, we were further from the beach than normal which made it a little inconvenient with small children. 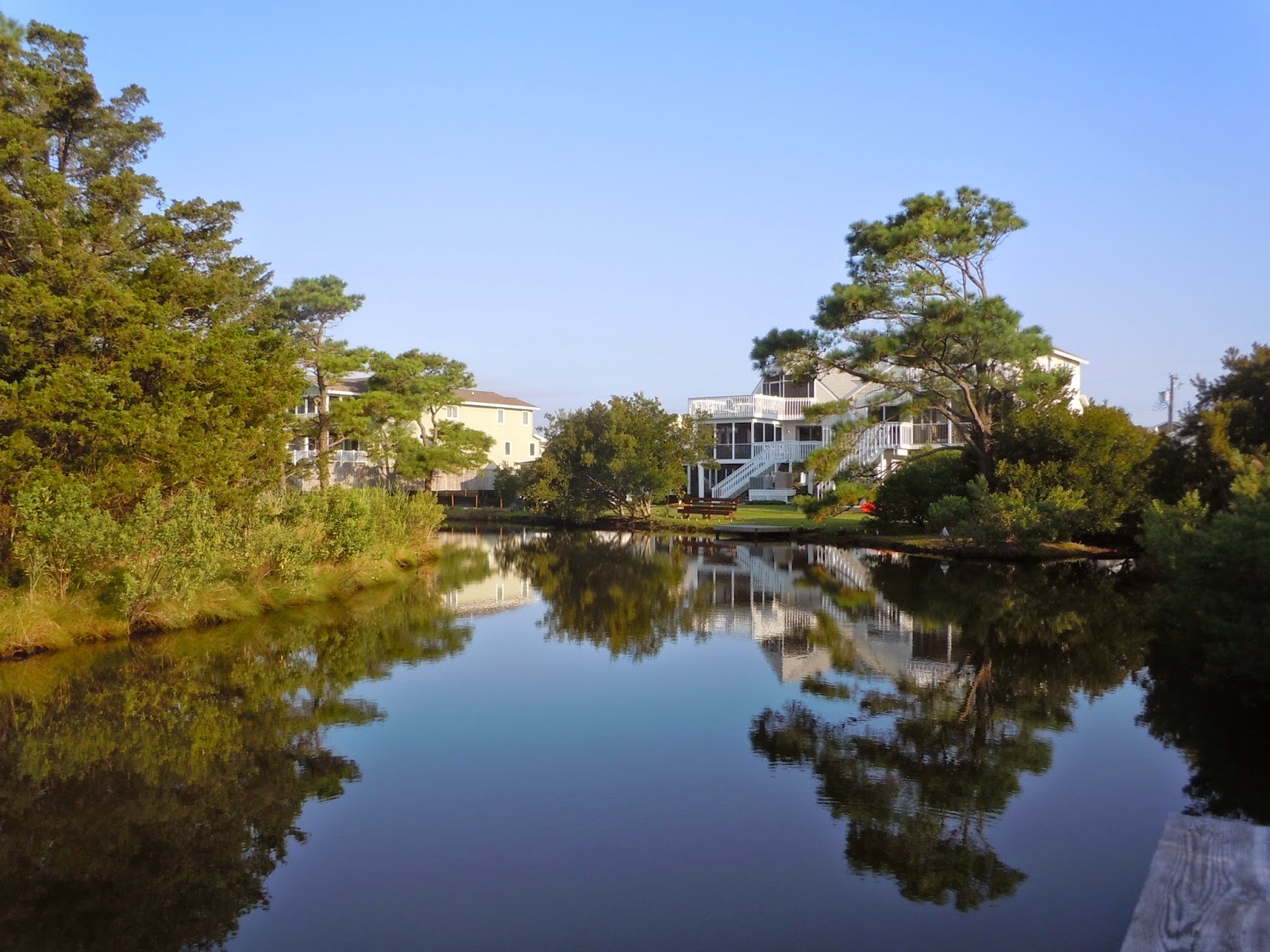 This was our house this summer which we rented once before, about 12 years ago. 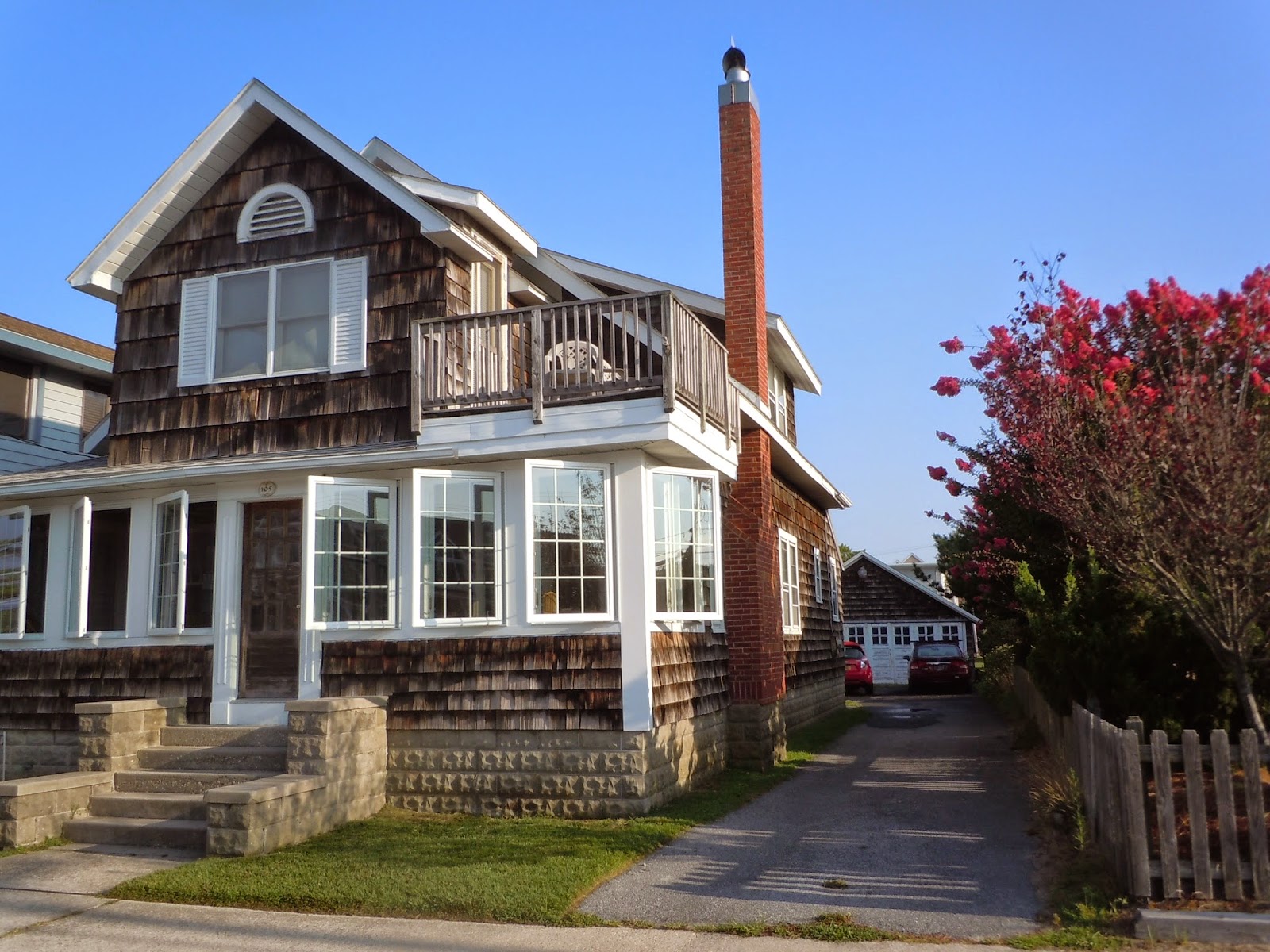 Out in the Bay

Took a break from smallmouth bass fishing on rivers to accept an invitation from my friend Greg to go out on his 17 foot Boston Whaler yesterday.  He caught a couple of small perch and a couple of small rockfish on light spinning tackle while I used an 8 weight fly rod and caught a small bluefish.  He was disappointed with our results, but I had a good time.  Though too small to keep, the bluefish fought well and jumped.  I love it when fish jump.
Posted by DJones at 2:06 PM No comments:

Back to the Upper Potomac

Good fishing yesterday at the Mouth of the Monocacy.  Waded along this gravel bar in the morning and caught three smallmouths on a green surface popper. 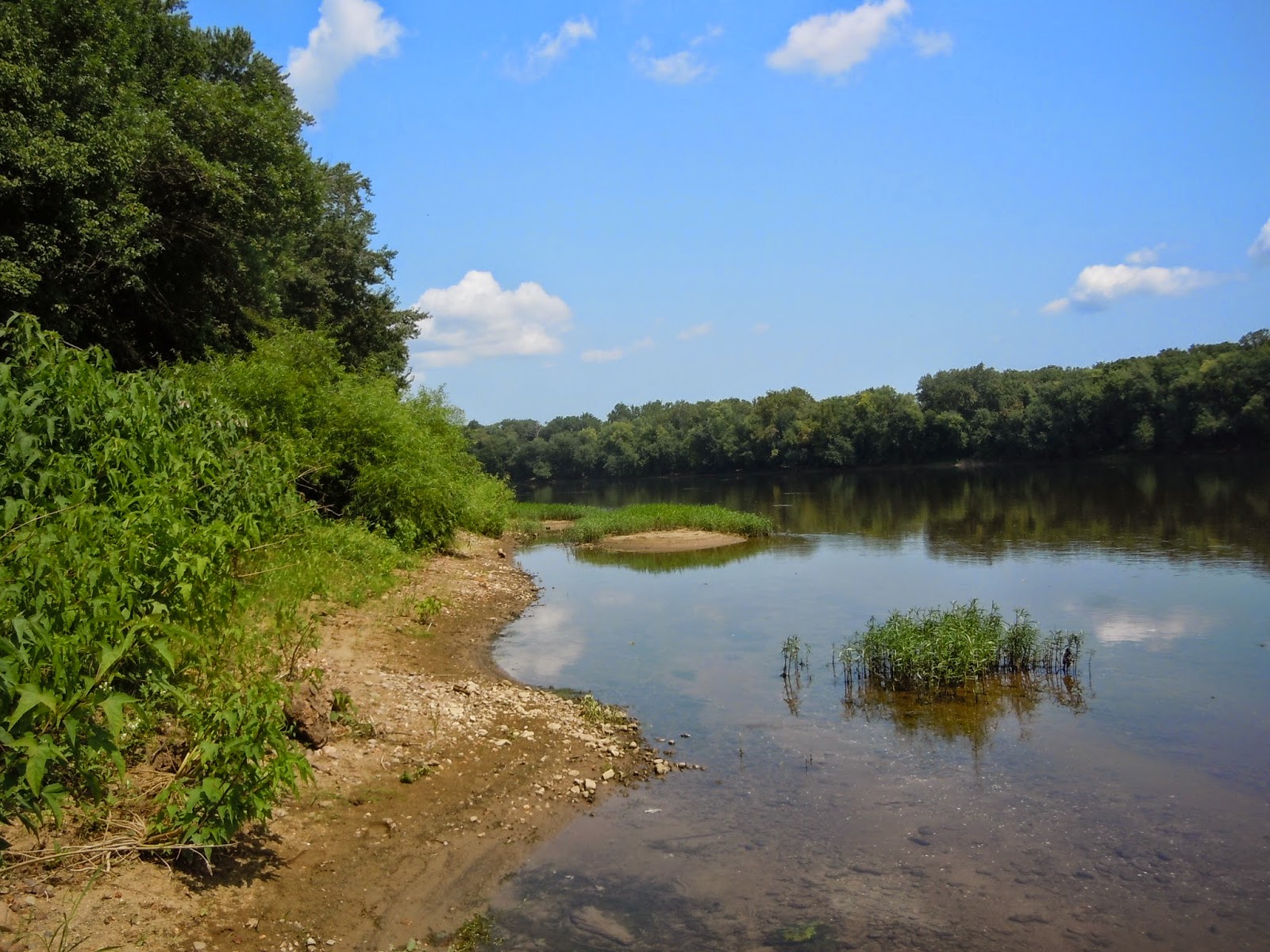 In the quiet water at the end of the bar, I caught four bream.  It took somewhat over an hour to cover that stretch of water, and I then walked back to the kayak, ate lunch, and took pictures.  It's a good summer for the hibiscus which grow along this shoreline: 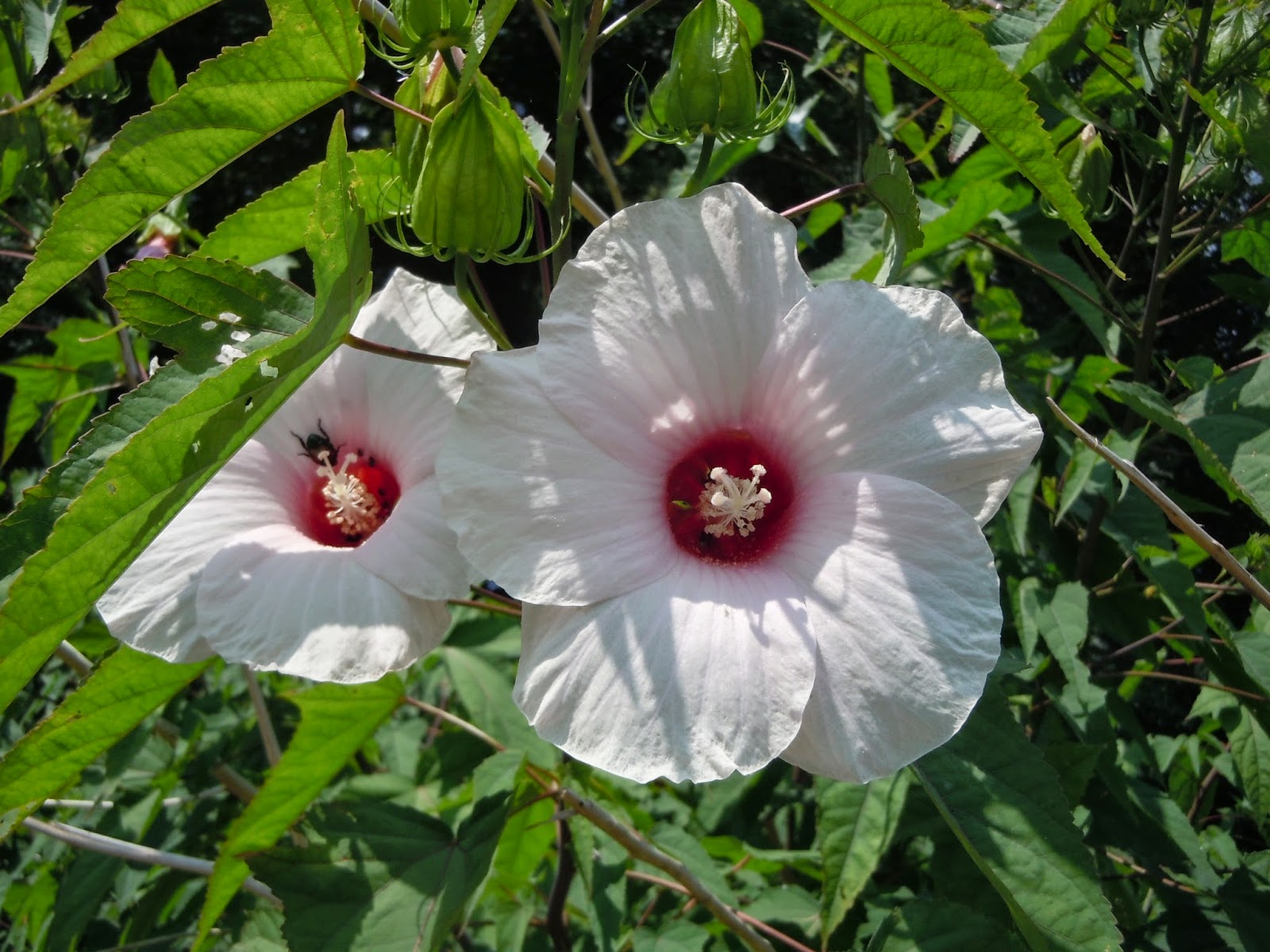 After the break, I resumed fishing for a brief period and caught another smallmouth on a chartreuse bullet-head darter and then called it quits.  Had a nice talk at the boat ramp with a guy about my age who hunts ducks in these waters.  River level was 1.4 at Point of Rocks.
Posted by DJones at 11:37 AM No comments:

Hemingway and Faulkner as Hunters

Both Nobel Prize-winning writers, their lifetimes spanned almost exactly the same years.  Their writing styles were dramatically different, but the outdoors figured prominently in their lives and in their writing.  Hemingway wrote about both hunting and fishing whereas Faulkner, to my knowledge at least, mentioned fishing only in passing, but the two activities are essentially the same with different quarry and usually with different tools.

Hemingway was a world traveler, and much of his writing about hunting takes place in Africa.  In his short stories and in The Green Hills of Africa he is often very precise about the specific gun calibers and bullets used.  The locales of his fishing stories span from Michigan to Spain and to Cuba and are similarly detailed about equipment and technique.  Faulkner focused on his home area in northwest Mississippi, and although very descriptive of the terrain and the hunt he gave only a general description of the gun, letting the reader know not much more than whether it was a rifle or shotgun.

Pursuit of fish or game heightens senses:  sight, sound, and smell.  In social situations, Faulkner quietly watched and listened.  Hemingway was quoted as saying he disliked cigarette smoking because as a hunter he was sensitive to the disagreeable smell.

Hunting and fishing have not been necessities for most people in the world for some time, and those of us who are drawn to these activities often ponder what it is about them which entices us.  This pondering leads some to questioning about humans' place in nature and how other human activities might reflect these very basic urges.  For me, in very different ways both Hemingway's and Faulkner's writings display these questions.
Posted by DJones at 8:13 PM No comments:

Wildflowers in the park 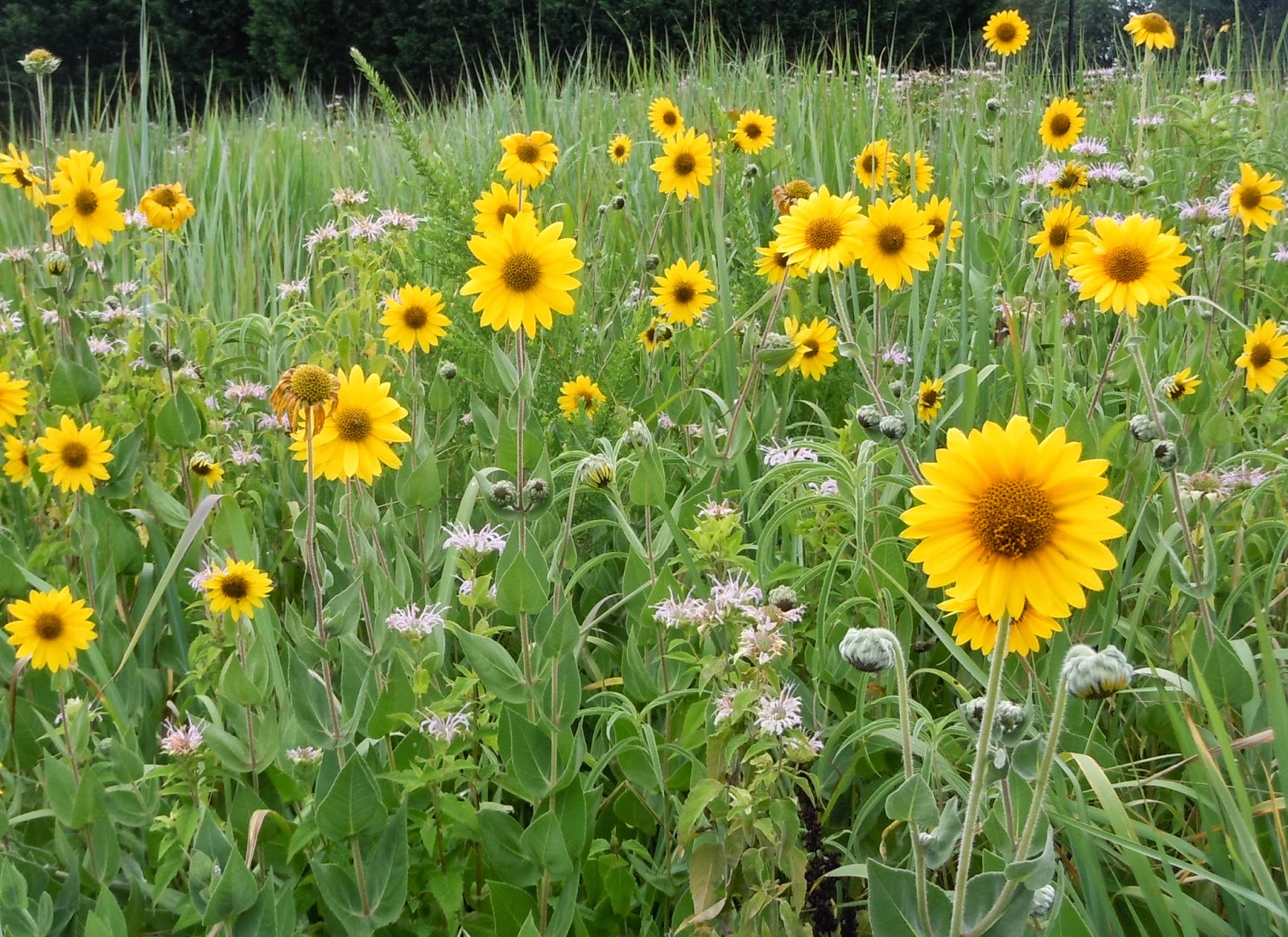 I've been haunted by a large smallmouth I hooked last fall and eventually lost after it got loose after a few jumps.  The spot on the upper Monocacy has done well for me, and I've found it to be a pleasant place to wade.  Yesterday, however, it was disappointing.

The water was higher than I was used to from previous visits (2.0 at Frederick and 2.1 at Bridgeport) probably because I usually fish there later in the season, and wading was a little trickier.  Despite trying a variety of flies I caught no bass, but about a half dozen bream and a fallfish saved the outing.
Posted by DJones at 9:35 AM No comments: