Normally, I don't make a conscious effort to see the well known, but I tend to people watch while in airports and spot one now and then. Years ago when I first started making business trips, I'd often see well known politicians on the shuttle from DC to NY. In the last few years of business travel not as many celebrity sightings for whatever reason, I now realize looking back.

The topic is on my mind because I had a couple during my recent trip. In Dulles as we were waiting to leave, I pointed out Al Gore walking through talking on a cell phone. None of us had any interest in approaching him, however.

The second was a much less famous person but a more interesting encounter. In the airport in Paris, I saw someone who I was fairly sure I recognized from TV, and when I saw he was carrying what looked like a trombone in a case I was about 99% certain. When he sat down, I walked over and asked, "Excuse me, but are you in the Saturday Night Live Orchestra?" He smiled and responded that yes, he had been in it for 25 years.

My wife who was sitting nearby was amazed that I would recognize him, but she agreed that he is somewhat distinctive looking. The three of us had a very pleasant ten minute conversation about music and the show, and I think he was pleased to be recognized. Maybe people of his level of celebrity, as opposed to the big time people like John Travolta and Oprah Winfrey, are less likely to view being approached by strangers who recognized them as an intrusion.

His name is Steve Turre, and he's cut a number of jazz albums under his name as well as appearing on recordings by big names like Ray Charles and Dizzy Gillespie. This morning I bought his latest album.
Posted by DJones at 2:22 PM No comments: 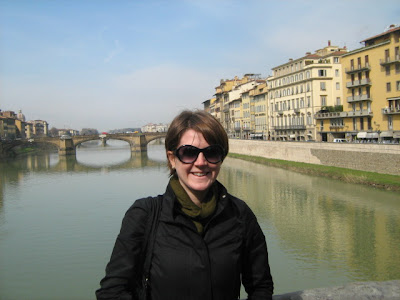 Just returned from trip to Florence with my wife, Pam, and my daughter, Rebecca. Although I may post other pictures in the future, I thought about which one I would select if I was limited to one and picked the above shot of Rebecca on the Ponte Vecchio over the River Arno.

I felt that this one was the most appropriate because Pam and I would not have made the trip if Rebecca hadn't suggested it. None of us had been to Europe before. When I was in college, most of my friends went, but I didn't. Pam and I always expressed interest, but we sometimes need a push to do something like this and Rebecca provided this push because art is her career. She did her advance work and knew exactly what she wanted to see, so we spent a couple of days in the cathedrals and museums of Florence. After that was out of the way, we did some day trips into the surrounding Tuscany countryside.

We all loved the scenery, food, and general atmosphere of Italy. Thank you, Becca for bringing us to it. You were great company and are a darling daughter who I am very proud of.
Posted by DJones at 3:47 PM No comments:

Acting on a suggestion from the Orvis shop in Bethesda, I fished at the Howard Chapel Road crossing. Yesterday, the guy at the fly fishing store pointed out that today would the last opportunity for a while since rain is forecasted for the next four days.

I felt some insects on my neck a couple of times which looked like stoneflies, but there were no visible rises so I fished streamers downstream from the bridge. A Patuxent Special didn't produce, so I switched to an orange Crystal Bugger and walked further downstream to where there were no footprints. Caught a nice rainbow about a foot long and then a small chub. Noticed some piles of mud which indicate the presence of beavers, and soon saw confirming evidence on some trees.

March 1, which was last Monday, is a national holiday in Wales, their equivalent of St. Patrick's Day. Although I was conscious of the date and its significance that day, I didn't note it here so now I am. Besides, it's a good excuse for showing their colorful flag.
Posted by DJones at 3:29 PM No comments: