This year's wildflower meadow in the park

I'll probably take more pictures of this meadow as the season passes: 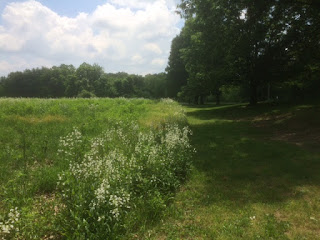 Posted by DJones at 1:58 PM No comments:

Pam is responsible for most of what I think is a very pleasant entrance into the house. 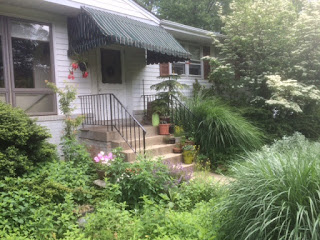 Posted by DJones at 1:55 PM No comments:

It’s Memorial Day in America
Everybody’s on the road
Let’s remember our fallen heroes
Y’all be sure and drive slow...

Like many Americans, I suspect, I don't often think about what this holiday celebrates, but today I've tried to correct this.

The Viet Nam War was my generation's war, and the combat deaths of those I knew personally came from that conflict. Two of them, Otis Keys and James Jones, were high school classmates who I remember more from times after we graduated. Otis worked with me in a brickyard the summer following graduation, and I remember him as a quiet guy, medium tall and muscular. He was on the school football team, I believe. Most of my memories of James were from my first year at the University of Maryland. He was one of the guys who gathered in the lobby of the one of the buildings where between classes we drank coffee and smoked cigarettes. Habits changed, so I didn't realize he had either dropped or flunked out of college until I ran into another of that group who told me a semester or two later that James had been killed in Viet Nam. He too was quiet but always seemed to have a friendly smile.

There may have been more from my high school who died there who I don't recall. Despite the toll of that war, there were so many of us male baby boomers that the war had less of a personal effect on the rest of us than you would think. There are some that I knew who served in the armed services during those years but didn't see combat. Some served in the Navy while others were in the Army but spent their time in Germany where we still had a major military presence. Still others were in Viet Nam but in a support capacity; one was a jet engine mechanic, and another ran the projector for the movies that were provided to entertain the troops. The projectionist enjoyed his role so much he signed up for another tour of duty. The only time he was in any danger, he once told me, was when he had arranged to show the Beatles film, Yellow Submarine. He heavily promoted the showing with posters throughout the base the week before, but unfortunately he found out at the last minute the movie hadn't been shipped in. When he made the announcement to the troops who had crowded into his theater well prepped with drugs, they rioted and he was lucky not to have been hurt.

Two others I knew were technically not combat deaths but died later as a consequence of serving in the infantry. Being exposed to agent orange resulted in their deaths years later of cancer. Larry Seeley, a tall, blond guy who wore glasses and who I had known since junior high, was one, and John Bernard whose children went to school with ours was another. I'm thinking of Larry and John today as well. Then there were those who survived combat but came back different men than the boys they were before. Not all the wounds of war were physical, and these guys lived with emotional scars and sometimes chemical dependencies. I'm also thinking of them.
Posted by DJones at 2:55 PM 1 comment:

Went last night with Bill and Gus. Nats won 2-1, and in the last inning I decided to get a picture when Nats' closer came on. That's Werth from behind who earlier in the game made a great catch in front of us. 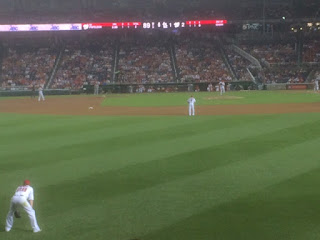 Not a fishing story

A week ago on the fishing trip there was plenty of time for stories since the fishing was so slow. One of the best ones came up when Truman, the disabled guy who I wrote about, asked the charter captain how was it that he always seemed to know where he was on that big body of water. Capt. Billy pointed out the instruments on board which assisted in helping him determine his position and observed that there were a number of visual landmarks as well, especially for someone like him who had been guiding on the Chesapeake Bay for over 20 years. He went on to say that his ability was restricted to on the water and that on land he was quite capable of getting lost. He then told the following story.

When Capt. Billy was a young man an uncle offered use of a cabin in the West Virginia mountains when he wanted to get away for a romantic weekend with his girl friend. Capt. Billy eagerly accepted and soon drove up with the young lady. Shortly after arriving at the cabin, the two decided to go for a walk in the woods. As they were leaving, he noticed a cat hanging around the cabin. Although the cat looked distressingly skinny, Capt. Billy wasn't too bothered because he never cared for cats.

Enjoying the scenery of the mountains, they walked for a number of hours, and at some point Capt. Billy realized that he had lost his orientation and wasn't sure of the way back. With the pride that young men often have, he didn't mention that he was lost to the girl and hoped that he would see something that would give him a clue of where he was. Finally, the young lady mentioned that they had been gone a while and that since it soon would be be dark, they should probably return to the cabin. Just before Capt. Billy started to admit to their predicament, he noticed the same cat that he had seen earlier at the cabin.

Yes, that cat led them through the woods, up and down hills, and back to the cabin. At the cabin, his girl friend was probably puzzled that Capt. Billy, who she knew disliked cats, was feeding this guide-cat anything it wanted. He had such gratitude to the cat for bringing them back that he would've given that cat anything and continued fussing over the cat for the reminder of the weekend. When it was time to leave for home, Capt. Billy decided the cat was going with them. That cat remained a valued pet for years.
Posted by DJones at 7:56 PM No comments:

Driving back from spending the night at Margaret and George's home in South Bethany, we encountered a thunderstorm on Saturday afternoon. The flat terrain of the Eastern Shore farm lands made it easy to see in the distance as it got nearer.

Since I was behind the wheel, Pam took the pictures. Here, we were entering the storm area near Denton, Maryland: 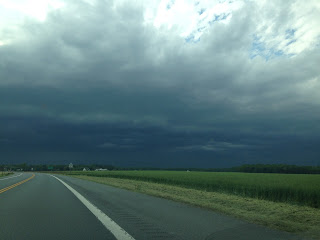 Since our car and the storm were heading in opposite directions, we were only in the hard rain and winds for about an hour. As we continued east, we started seeing clear skies as the Bay Bridge comes into view: 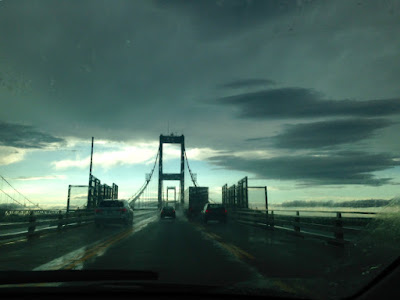 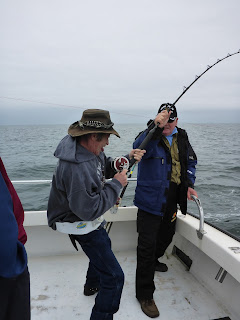 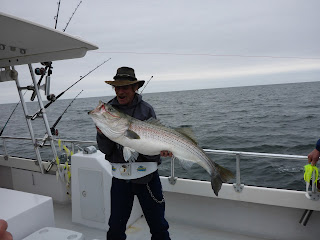