In the Brooklyn Botanical Gardens

These were taken in the Japanese garden section last Friday using Pam's iPhone because I had left my camera back in the apartment.  One reason I'm tempted to get one of these "smart phones" gadgets is the quality of the built-in camera. 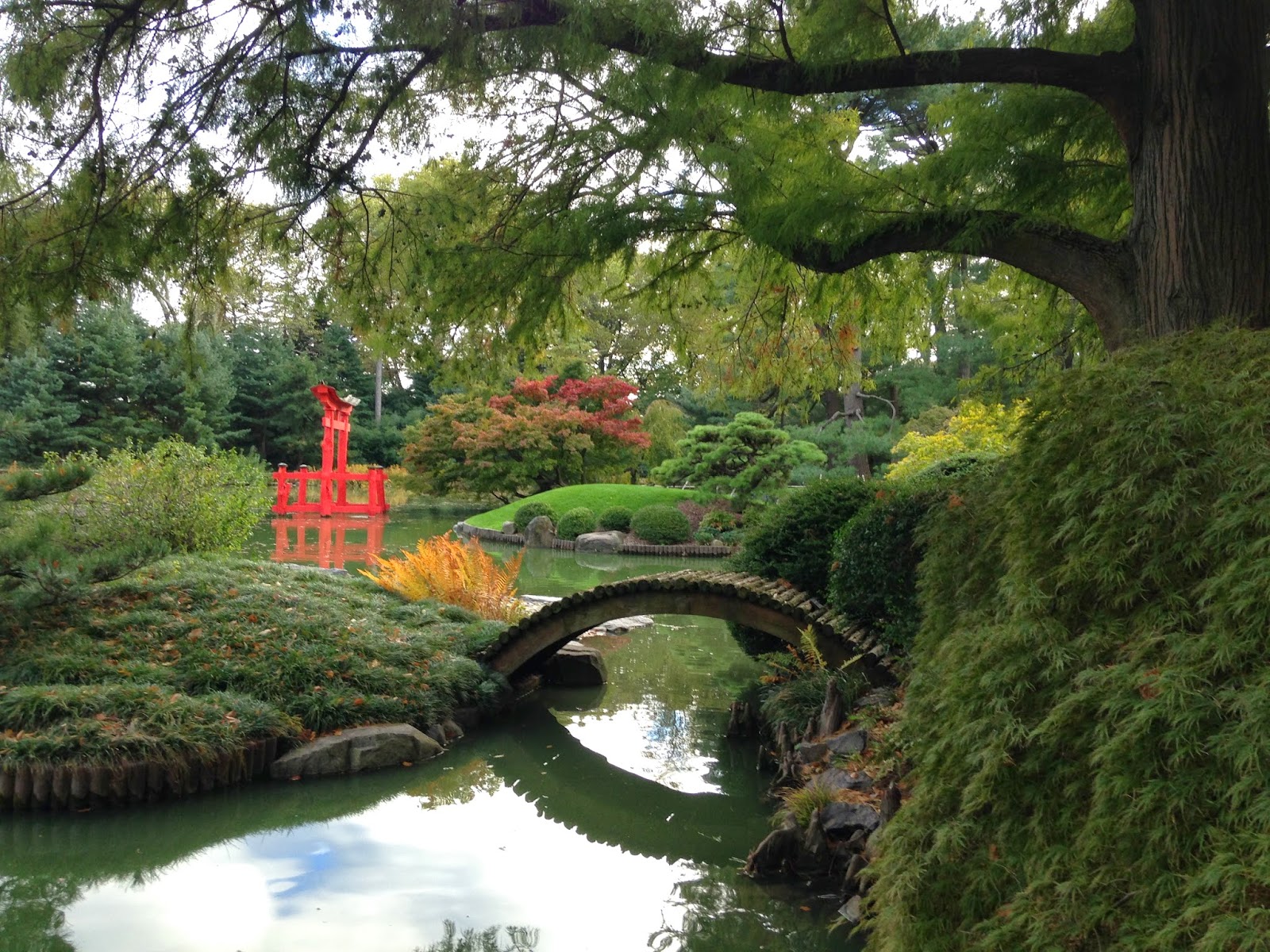 Gotta listen to the songbirds

Like most people who like the outdoors, I notice birds.  The reason that many non-birders own bird books is that we want to identify and have some understanding of what we are seeing. While I am familiar with some bird sounds- the cranky screech of a disturbed great blue heron and the high pitched call of a hawk (inappropriate, I always felt, for such a fierce bird), I recently realized that I can't really identify any song birds by their calls.

It was Lyanda Lynn Haupt's The Urban Bestiary which called my attention to this deficiency in my nature appreciation.  Her book contains tons of information about a variety of animals which may be found in cities and close-in and far-out suburbs, and she writes with wit and eloquence.  Chapters are devoted to coyotes, moles, squirrels, bears and others, but her real love seems to be birds.  She wants others to share this love by tuning in to all aspects these creatures and advises the useful beginning point of  learning the robin's song.  "If you do this", she says, "you will be more familiar with birds than 98% of Americans."

Many of the song birds (or perching birds or passerines) have left the area for the season, but some will remain and I'm developing the habit of listening more closely while outdoors.  Using all our senses is a way of being in greater touch with the earth, a way of being more alive.
Posted by DJones at 12:36 PM No comments: 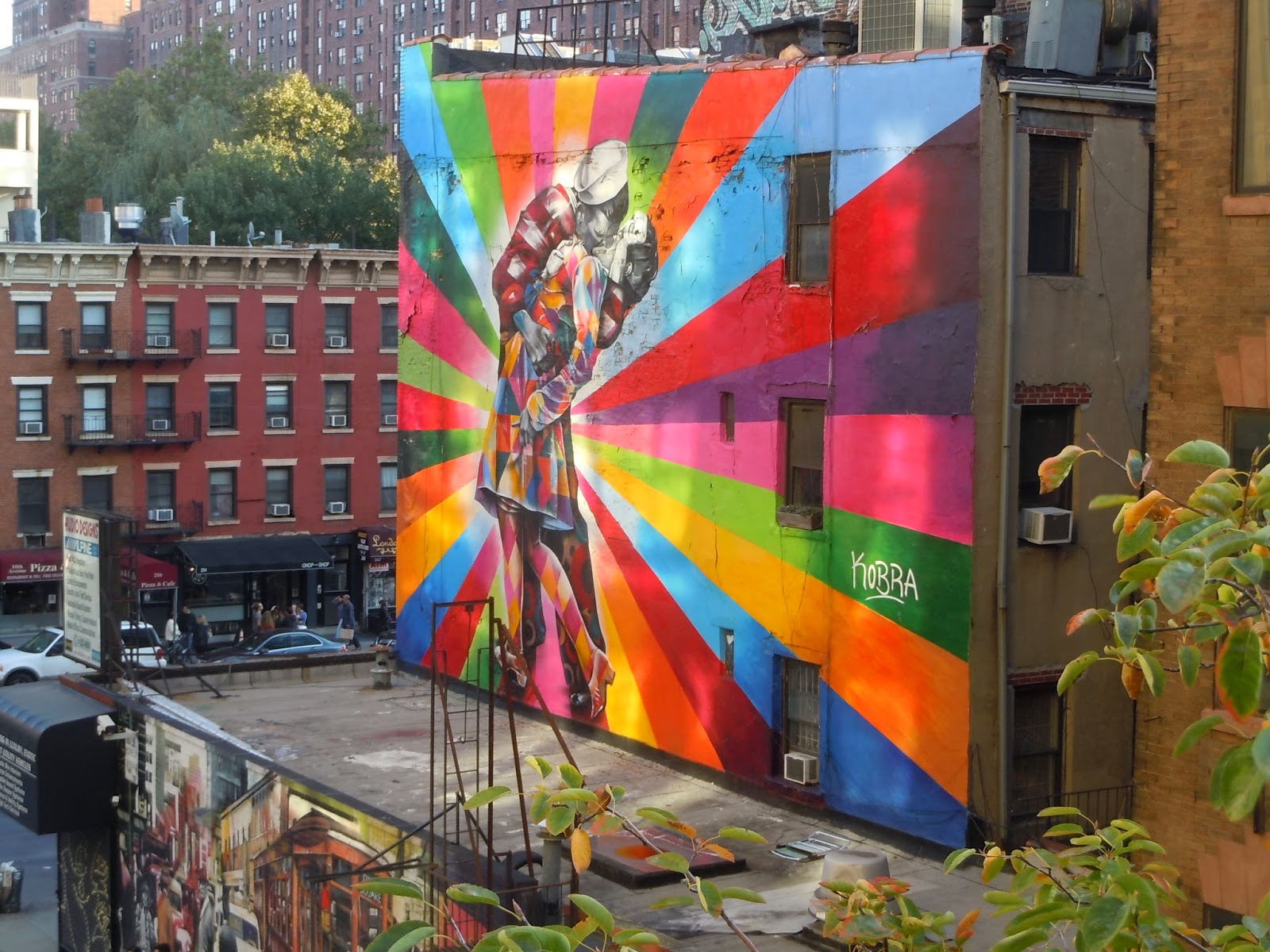 Sunday, in Brooklyn at the bakery that Rebecca's friend Anna just opened: 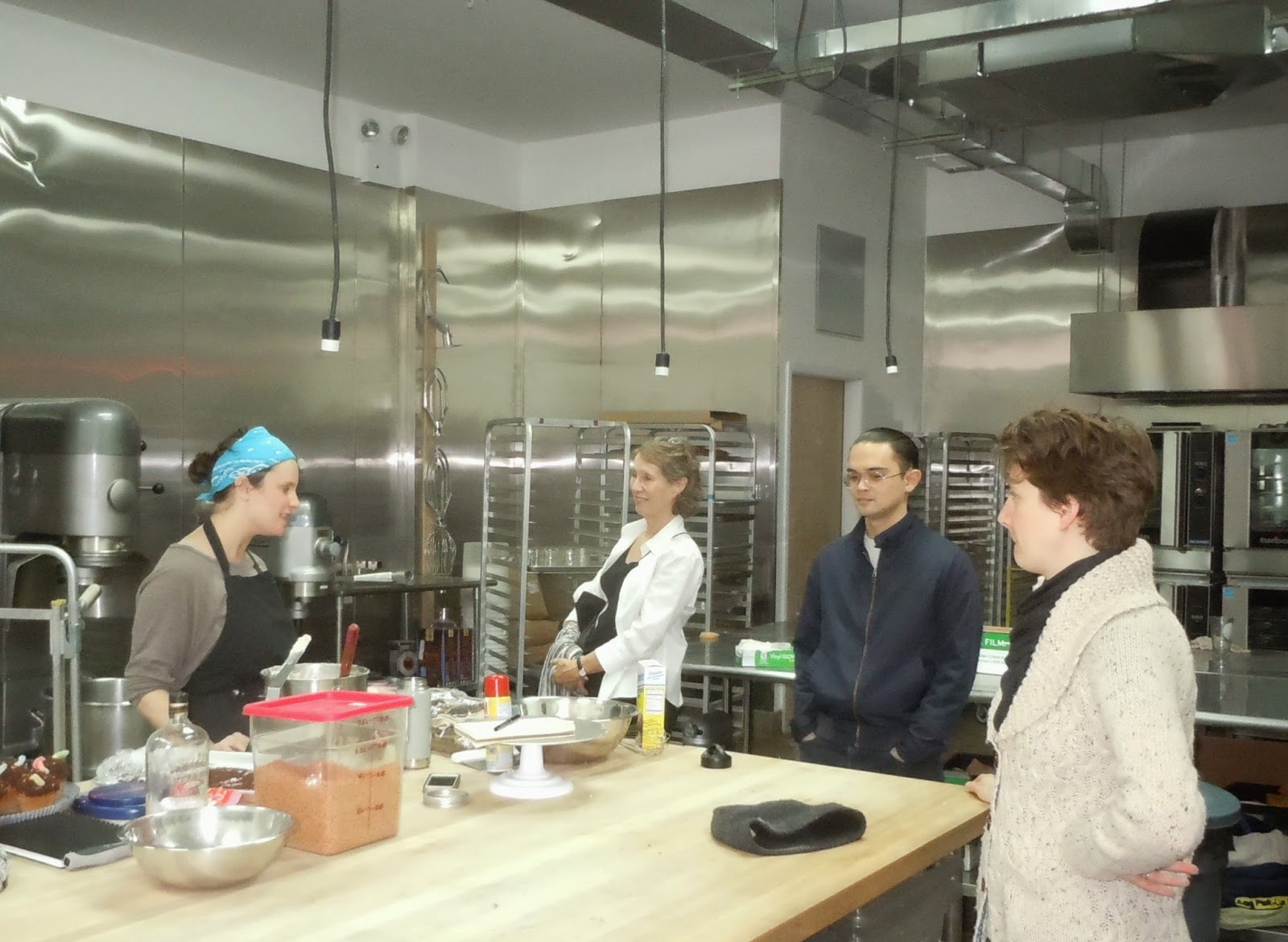 Saw the Tom Stoppard play Indian Ink on Saturday night.   Also visited the J.P. Morgan Library/Museum and the Brooklyn Botanical Gardens for a full and fun weekend.
Posted by DJones at 8:29 PM No comments:

Writing about a recent TV debate on whether the nature of Islam conflicts with Western values of tolerance, Slate Magazine writer Andrew O'Hehir argues against the view of Islam critics TV host Bill Maher and especially his guest Sam Harris.  For O'Hehir, Harris' opinion is colored by his particular brand of atheism which views religion as "failed science."

This attack on Islam as opposed to those who take a more conciliatory attitude about the religion reflects, according to O'Hehir, the difference between science majors and liberal arts majors.  He writes, "When I say that one side is primarily concerned with facts and the other with narrative, or that one side understands the world primarily in subjective, experiential, and relativistic terms while the other focuses on objective and quantifiable phenomena and binary true-false questions, that may help us frame the profound mutual misunderstanding at work.  Harris' conception of religion as bad science, which seems like a ludicrous  misreading to those who understand religion as a mythic force that shapes community and collective meaning, is a classic example.  One side insists that the only important question is whether the truth claims of religion are actually true;  the other side says the question doesn't even matter, and then wonders what 'truth' is anyway.  It's the overly literal-minded versus the hopelessly vague."

Author Lyanda Haupt in The Urban Beastiary sees no conflict in incorporating both myth and science in her descriptions of animals.  Early in the book, she quotes Karen Armstrong's A Short History of Myth that "mythology and science both extend the scope of human beings."  Armstrong considers it "a mistake to regard myth as an inferior mode of thought which can be cast aside when humans have attained the age of reason.  Mythology is not an early attempt at history and does not claim that its tales are objective fact.  Like a novel, an opera, or a ballet, myth is make-believe;  it is a game that transfigures our fragmented, tragic world, and helps us to glimpse new possibilities."

My own view is closer to Haupt's and Armstrong's than to O'Hehir's.  My degree in history 44 years ago came from the University of Maryland's College of Arts and Sciences.  It is now the College of Arts and Humanities, but the old name better suits me.  As I wrote in this blog last December in a post titled "Between Poetry and Science", I'm comfortable in that position, respecting both the scientist systematically extending our knowledge and the artist inspiring us.

Posted by DJones at 9:58 PM No comments:

The Woodrow Wilson Bridge during the Moo Cup 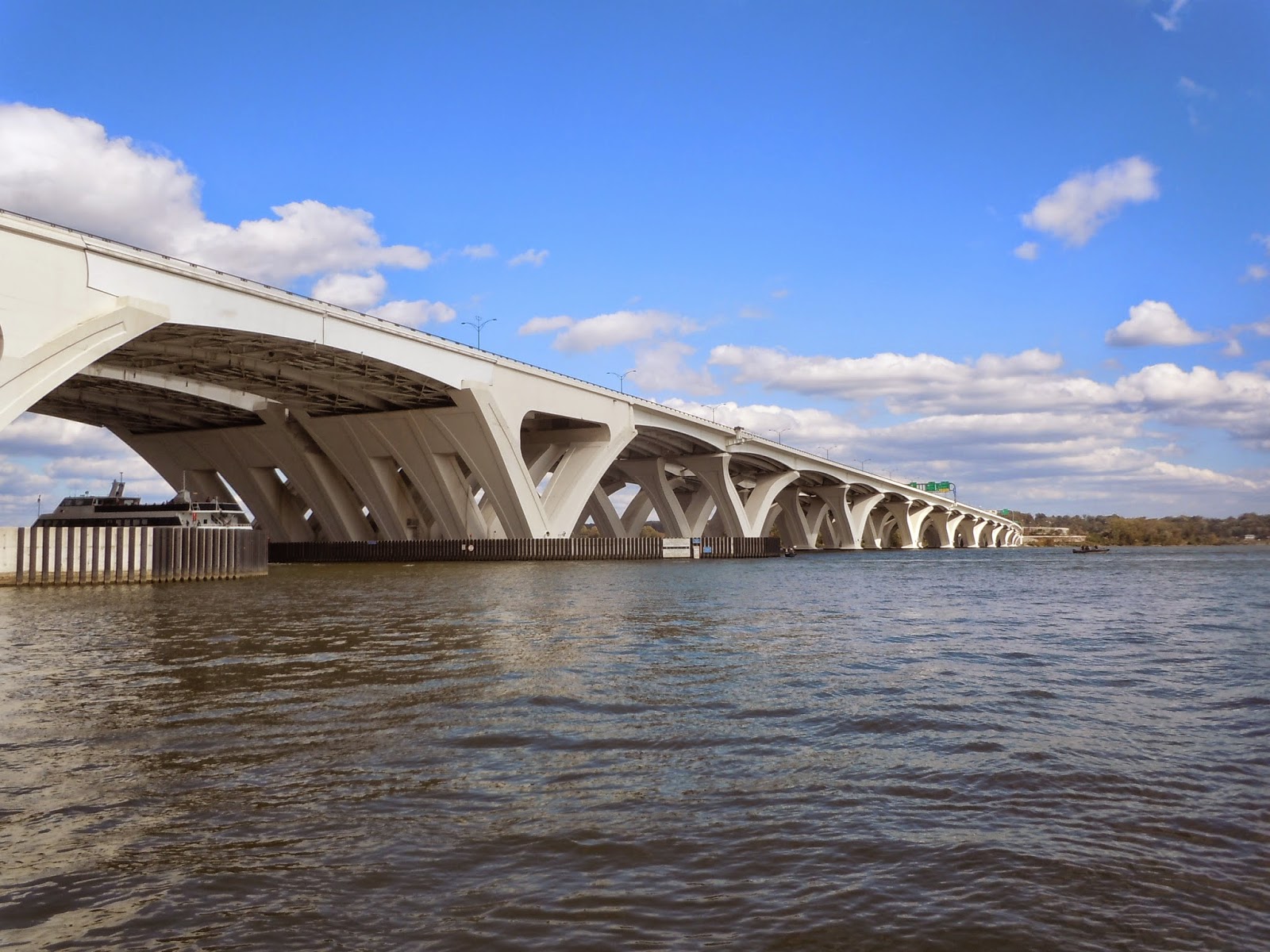 Although I've driven over it many times, I've never given a thought to its looks.  From a fishing boat on the river below, it's actually attractive.

Yesterday was the annual Moo Cup Fishing Tournament, a tongue-in-cheek name for a gathering of guys who hang out at the internet site called the Moo Board for obscure reasons. A half day of fishing in the tidal Potomac is followed by drinking beer and eating some excellent barbeque chicken and ribs.  Eating barbeque with your hands is not unusual, but the side dishes, green beans and macaroni and cheese, had to be eaten in the same manner because the forks and spoons were forgotten.  With the food served off the bed of a pick-up truck, eight men dressed for fishing eating a meal with their hands must have been a somewhat primitive sight. 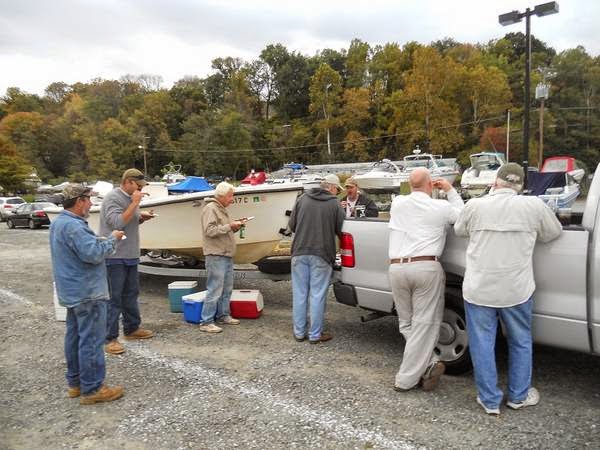 After the food came the presentation of the Moo Cup which is awarded to the guy who caught the biggest fish.  Whiskey is poured into the cup for the winner while the losers drink straight from the bottle as it passes among them for a couple of rounds. 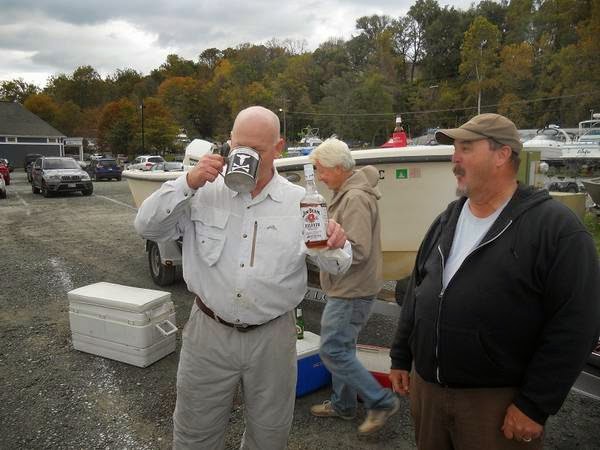 There isn't much fishing left as the weather grows cooler, so this event has come to be a fun ritual symbolizing the passing of the season for me.

Music and Dancing at the New Deal Cafe...

Music provided by Little Red and the Renegades whose specialty is zydeco and New Orleans music. 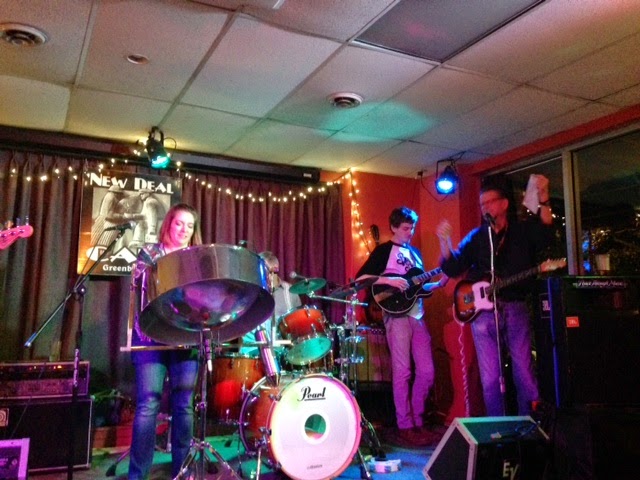 Pam took the shot above with her new iPhone.  Susan's iPhone got a good focus on the lead singer, but not on Pam (in blue) and me while we danced. 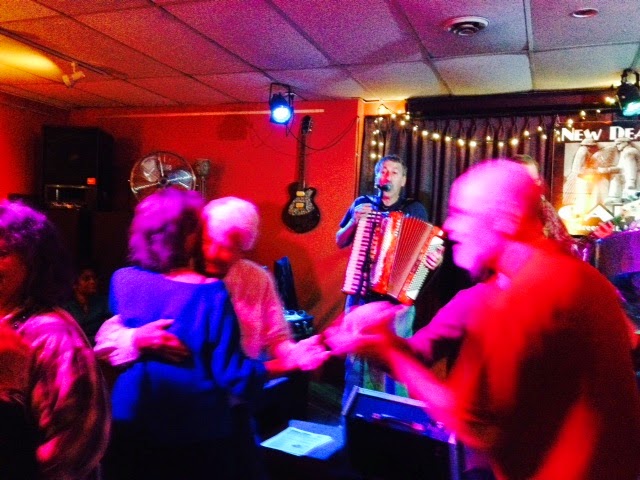 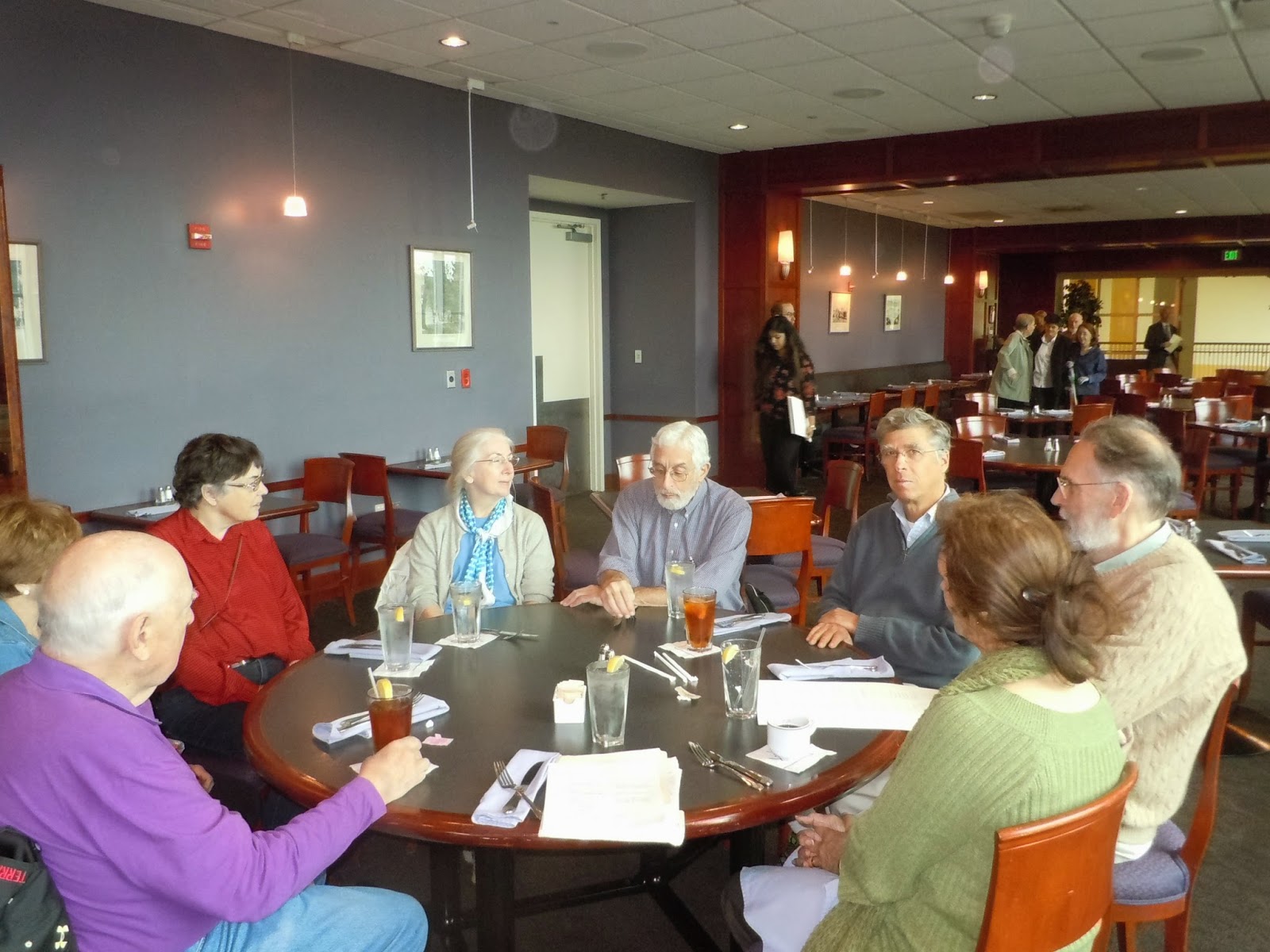 The Golden ID program allows retired people to take courses at the University of Maryland for a reduced tuition rate.  I've been in the program for four years, and for the past year I've been the Chairman who organizes the twice monthly luncheons.  The format is informal, and the discussions are lively exchanges of information about courses and anything else.  Because the participants are intellectually curious people who are interested in continuous education, the level of conversation is often high.

Posted by DJones at 9:33 PM No comments:

Fishing the River, the Bay, then the River again

Fished the Potomac at Lock 8 on Friday, September 26, and caught a couple of smallmouth bass and a few bluegills in a couple of hours.

Tuesday the 30th, I took the kayak to a spot on the Bay.  Fished an out-going tide for a couple of hours and caught nothing, but it's a nice spot.  I've caught fish in the same waters on a friend's boat, so I plan to return sometime.  Met friend Joe in Deale for lunch, so it turned out to be a nice day despite the poor fishing.

Today, I went back to the river, this time to Pennyfield Lock which I hadn't fished in some time.  When the weather gets too cold to wade wet, I stop fishing for smallmouths on the Potomac, and I think I'm at that time because it was pretty chilly standing in waist deep water in a gusty wind.  Nevertheless, I did manage a couple of smallmouths during a short trip, and the second was a nice fish, about 12-14 inches, on a top water fly. 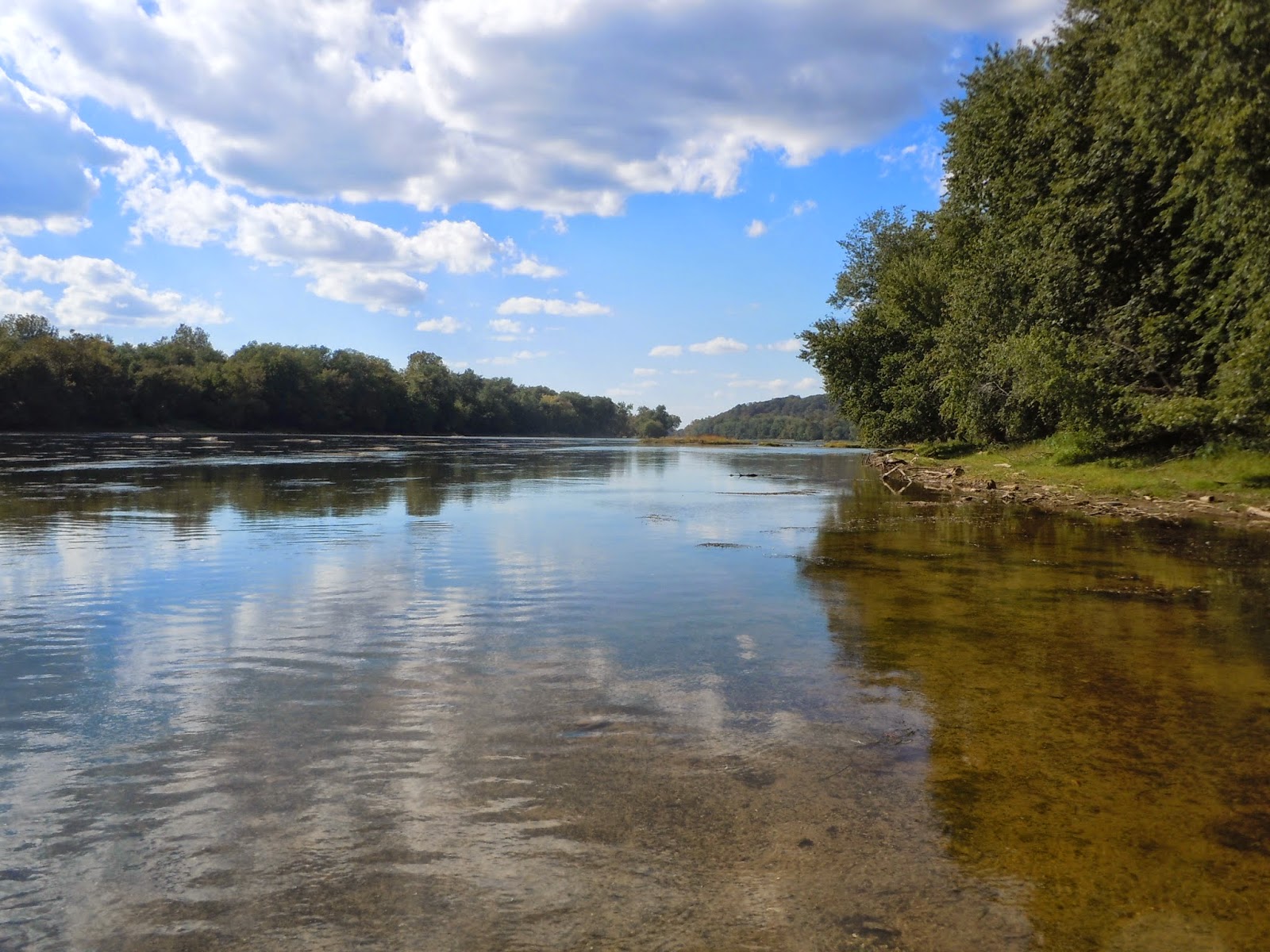 Below is a picture of the lock-keeper's house which can be booked for an overnight stay. 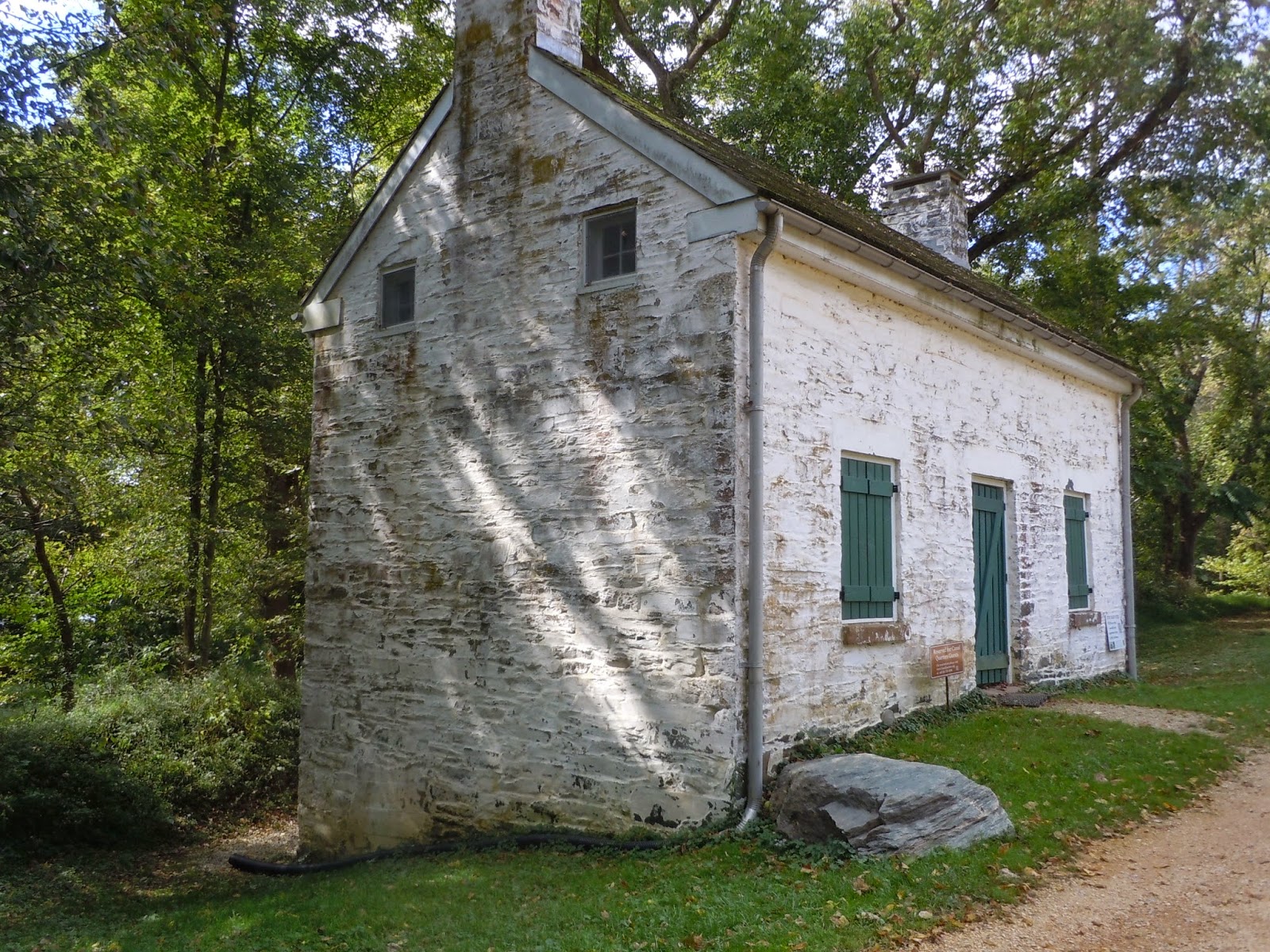