Hibiscus flowers along the Potomac 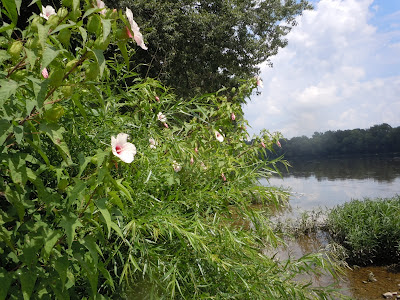 At least that's what I think they are.  Anyway, they're growing along the Virginia shore near where the Monocacy River flows into the Potomac.

As I frequently do, today I looked up historical events of the current date and learned that the Spanish Civil War began on July 18, 1936 although some sources give the date as the 17th.

When the civil war broke out, the existing government was a representative republic who were challenged by the Fascist insurgents led by Franco.  The civil war is often viewed as a prelude to WWII because Nazi Germany and Fascist Italy supported the insurgents while the USSR supported the Republican government.  In addition to the Soviet government, non-Spaniards, often communists or socialists, joined the opposition to Franco because they believed that the Spanish Republic was a front line in the general war against fascism.

I'm currently reading Ernest Hemingway's For Whom the Bell Tolls which takes place during the Spanish Civil War, so this subject is on my mind lately.  The novel's protagonist is an American who is fighting on the side of the Loyalists, those who support the government, and is a member of the Abraham Lincoln Brigade, the name given to this group of Americans.  The Abraham Lincoln Brigade became viewed by the American government as a communist front because of the large number of communist party members, and even 30 years later the organization's name still appeared on federal government job applications as a subversive group.

It's popular to comment about the polarization of current American politics, but a civil war such as Spain's shows that political polarization can be much more extreme.  The main character of For Whom the Bell Tolls is not a communist but accepts their leadership in the absence of any viable place for political moderates.  I'm sure that among the insurgents were non-Fascist conservatives who similarly allied themselves with leadership that they did not fully agree with.  Amidst the bloodshed everyone had to chose a side, and the voices of moderates from the political right and left were lost in the thunder of combat.

History is valuable in giving one a perspective on the present.
Posted by DJones at 11:26 AM No comments:

UXO pulled up with anchor

UXO stands for unexploded ordnance, and this one was brought up off the bottom of the Chesapeake Bay during a fishing trip Saturday.  The military has used obsolete ships as targets in a number of spots on the Bay in years past.  Holding the bomb is my friend Capt. Dave who is a retired charter boat captain in the Northern Neck of Virginia. 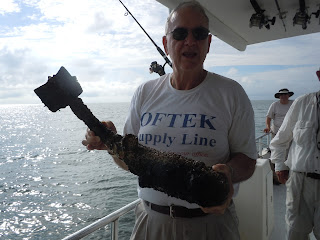 Besides the bomb, we also caught rockfish, blues, and croaker, but the fishing was slow despite the hard work of Capt. Billy Pipkin. 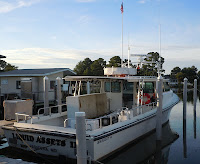 He's an excellent fishing guide and an entertaining guy to be around.  His boat was very comfortable for the six anglers invited by Capt. Dave who organized the trip.  I had a good time.
Posted by DJones at 11:01 AM 1 comment: 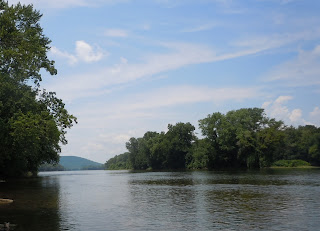 View is upstream towards Point of Rocks where the water level was listed at 1.16.  Little Falls reading was 2.94.  Fished for a couple of pleasant hours and caught a nice smallmouth bass on a white Bullet Head Darter using an eight weight rod.
Posted by DJones at 5:04 PM No comments:

Wildflowers on my walk 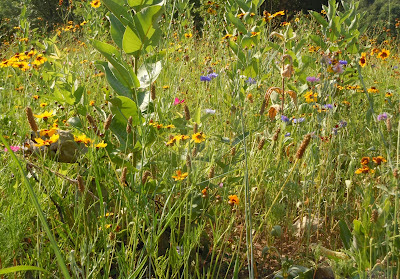 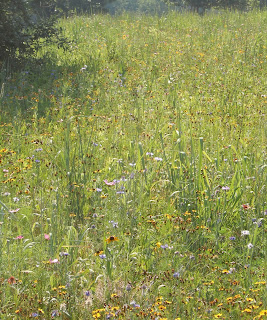 Like many old guys, I'm walking daily for health and enjoying it even though I have to get out early on these hot days.  Every day I pass by wildflowers alongside a wooded area of the park. 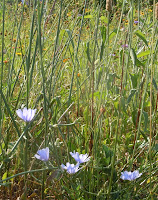 Because the exercise requires that the walk is nonstop, I don't bring a camera.  A few days ago, however, I came back with one. 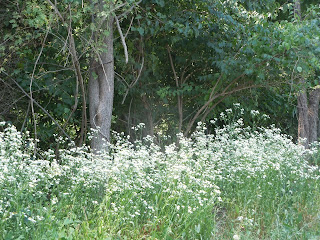 And, of course, when the lilies in the pond flower, they always attract my attention. 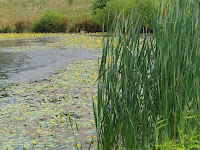