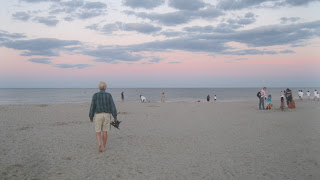 Tuesday we drove down for a couple of days to take advantage of the perfect weather.  Pam took this picture the evening of the first day. 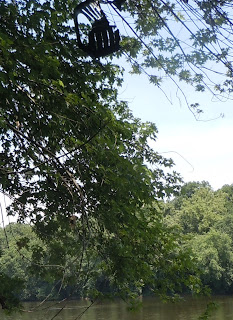 At the top edge of this picture is most of a plastic lawn chair that apparently came down river in a flood until it stuck in the branches.  The chair is about 20 feet above the current level of the river, and the tree is on Nolands Island upriver from the Nolands Ferry boat ramp.


Yesterday's level was 1.80 at Point of Rocks and 3.21 at Little Falls.  I was there to fish and landed three smallmouth bass and one bream and hooked and lost three other bass.  Losing fish is common when fishing for smallmouths, but in recent years I've lost very few so I believe the law of averages caught up with me.  All of the bass but one were hooked on a chartreuse bullet head darter that I ordered from Joe Bruce of Westminster, Maryland.
Posted by DJones at 2:03 PM No comments:

Fishing at the pond has been very slow.  The only good outing was an evening a week or two ago when I caught two good crappie and a largemouth all within a half an hour or so.  It's probably key that it was an evening rather than an afternoon.  On the afternoon trips this month (2 or 3) the only catch was a small bass one day when I felt like fishing the 7 foot fiberglass rod that I haven't used in about 20 years.  In May I wrote that bluegills were pretty much a sure thing at the shallow end, but that certainly is no longer the case.

I did another trip this month based on wanting to use a particular rod.  That one was to Thomas Point Park because it is a close place to fish the salt with my 9 weight rod.  Didn't catch anything, but it's a nice place that I intend to return to.

Yesterday I set out to fish Antietam Creek near the Civil War battlefield, but it was high and off-color from a recent rain.  Instead I continued to the Potomac at Shepherdstown, West Virginia which was running pretty clear.  I didn't want to wade very far, but I did manage a nice smallmouth and a bluegill within a short time.

The June fishing trip to the Gunpowder is described on June 7th below.
Posted by DJones at 8:53 PM No comments: 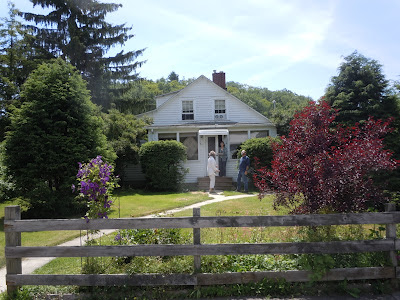 Spent a couple of days visiting.  Above is Pam, her sister Kathy, and Kathy's husband Bernie in front of Kathy and Bernie's home which is the house that Pam and Kathy's mother grew up in. 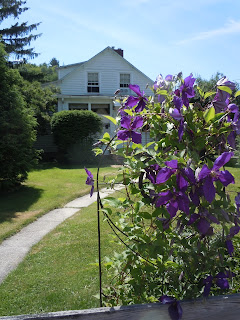 Their clematis plant was so handsome I wanted a picture highlighting it.


Gormania is very near the headwaters of the Potomac River, and the river flows a few feet in front of the house. 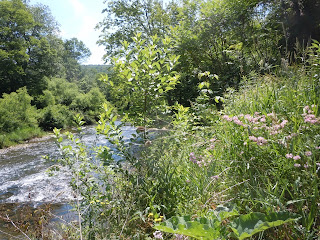 Posted by DJones at 1:16 PM No comments:

The House and Yard: Early Summer 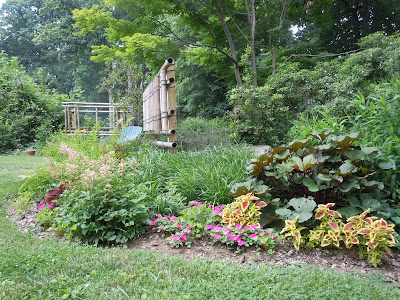 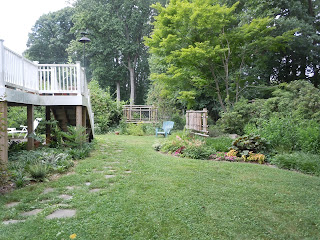 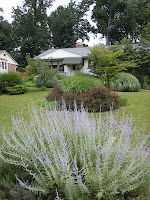 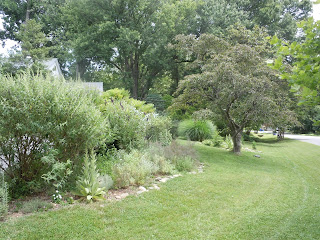 Posted by DJones at 1:05 PM No comments:

Masemore Mill on the Gunpowder River 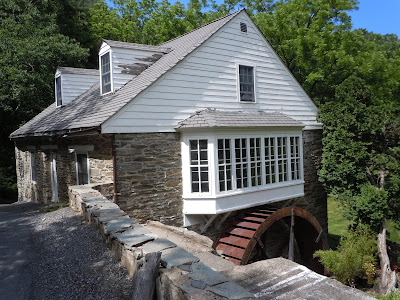 The agricultural mill was built in 1793 and is now a private residence.

Yesterday I fished the Gunpowder for the first time in a couple of years.  Although I got only one fish, I felt satisfied because the last visit or two I caught nothing.  The river is a nationally known trout stream, and being located near a highly populated area it gets heavily fished.  The trout have become very wary and hard to fool, so any fish caught is cause for pride.  The one I got fell to an old fashioned wet fly.  He was a brown trout of  only about 10 inches, but he fought hard on the  four weight fly rod.

I was concerned when I arrived in the parking lot in the late morning because it was filled with cars and was relieved to realize they didn't belong to fishermen.  There was a gathering of Maryland state troopers and men and women in business attire.  As I suited up in my waders, I listened to them planning an upcoming event that would be attended by the Governor and also heard mention of the name of the famous fisherman Marylander Lefty Kreh.  I checked into this later and discovered that a trail  along the river was to be named for Lefty and that next week there will be a dedication ceremony.
Posted by DJones at 2:54 PM No comments:

A Lesson Before Dying

Early in this Ernest Gaines novel the reader learns that a young black man in Louisiana in the late 1940's has been convicted of a murder he did not commit.  Racial injustice is not the primary story, however, because I believe a white man caught in the same circumstances and using the same disastrous judgment may have also been found guilty.  A white man would not have been compared to an animal during the trial, though.  Ironically, it was the defendant's own attorney who in an effort to save him from execution says there would be no more justice in killing him than killing a hog.

It is this comparison which moves the story forward as another young black man, Grant, is pressured into regular visits to the condemned man to convince him to face death as a man despite what has been said about him.  Grant is a contrast to the jailed man;  he is intelligent, educated, and attractive to the women of the black community.  He is also somewhat confused and indecisive about his own life and feels restricted by the limited opportunity of his economically depressed racist surroundings.  He often thinks of leaving with his married but separated pretty girl friend, but stays and continues his job teaching school which he finds unsatisfying.  As he gradually effects change in the prisoner, he also changes.

My complaint against some novels set in the segregationist South is that the characters are simplistic;  all the blacks are good and all whites bad.  Although Gaines writes using simple words and sentences, his characters are not at all simple.  The black characters are a mix of flaws and good intentions, and most of the whites are not so much evil as unquestioning of the society they were born into and its privileges to them and the injustices to others.  This is the way most people are in my experience.

A Lesson Before Dying is often taught in schools alongside the classic To Kill a Mockingbird.  The novels take place in similar Deep South locales, at times not far apart, and with an inter-racial crime crucial to the plot, but the stories are much different.  I very much admire them both.

Posted by DJones at 2:06 PM No comments: