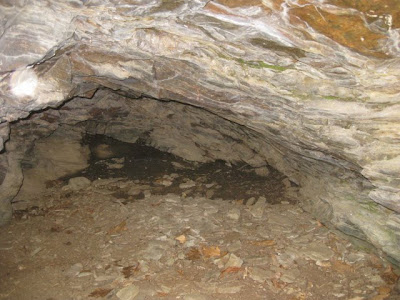 Yesterday we had the third session of this course and our second field trip. These first two field trips were both near the Potomac River, and yesterday's was just upriver from Pennifield Lock. We walked through the woods to a rock shelter, a small cave about 13 feet deep where archaeologists have discovered artifacts that go back to 3800 BCE. It became an official archaeologic site in 2002, but locals have obviously known of it for years because in addition to the old arrow heads and other stone tools a .22 bullet shell and a 1990 penny were also found.

Last week's trip was a visit to a historical archaeological site where almost 20,000 Union troops were stationed during the Civil War at Muddy Branch creek. We saw the site of a block house on a buff overlooking the river where the troops kept an eye on Confederate activity on the other side. There was Confederate activity on the Maryland side as well causing Lincoln to put the state under martial law to keep it from seceding. The area is heavily wooded now, but I had to continually envision how it looked at the time, all open fields.
Posted by DJones at 11:21 AM No comments: 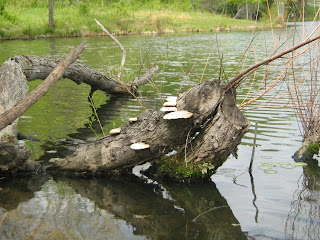 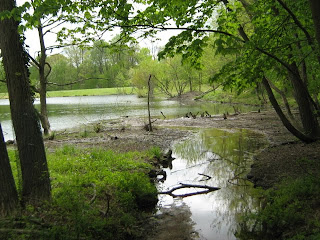 Thursday, April 15 rented a boat at Fletchers on the Potomac and caught about 8 hickory shad. Temperatures in low 70's, so I was comfortable in a tee shirt.

Today, I caught about a dozen bluegill and one bass at the pond in the park, pictured above. Cooler and windy.
Posted by DJones at 3:24 PM No comments:

Jug Bay on the Patuxent 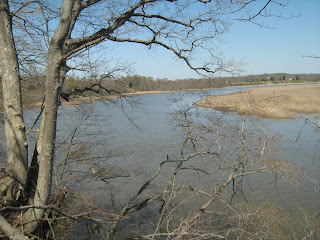 Nice day to visit the tidal Patuxent, not to fish but just to show the park to Marv and enjoy being by the water. Went a few miles downriver for lunch at River's Edge in Benedict, Maryland and had fried oysters and a draft beer. Life is good.
Posted by DJones at 4:27 PM No comments:

Some early reports that shad are making their annual spawning run up the river, so today I drove to Fletchers to get a DC license. Water way too high (6.6 at Little Falls) and muddy for good fishing but tried a few casts anyway. Pleasant walking upriver to within sight of Chain Bridge. Perfect weather, in the 70's and sunny.
Posted by DJones at 4:17 PM No comments:

Spent all day Sunday there with friend Lou, the Mad Russian and his son Dmitri. No one caught much of anything, but we had a good time.
Posted by DJones at 4:15 PM No comments:

The pond in the park was just stocked, and Saturday I caught a 13 inch rainbow trout which we ate for dinner. Also earlier caught a crappie which I released out of habit, and that was a mistake because they're good eating. Spinning rod and black Mepps #1.
Posted by DJones at 4:10 PM No comments: