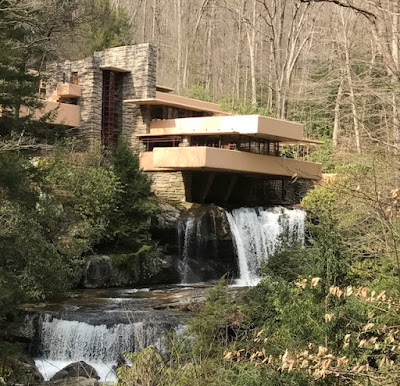 Tuesday Pam and I drove up into Pennsylvania to see architect Frank Lloyd Wright's famous house that he designed for the Kaufman family of Pittsburg. The photo above is the shot which most tourists take and has become the standard representation. 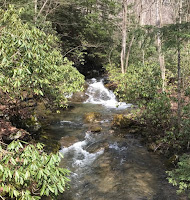 vacation home next to a stream. The stream, Bear Run, looked to me like a classic eastern trout stream as it tumbles down the hillside. Rather than blindly following his client's wishes, the architect proposed cantilevering the house over the water.


Looking downstream, this photo shows the stream as it passes under the house just before the water falls: 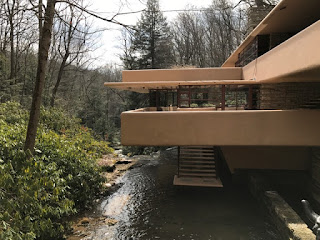 Although I have read about the house and seen the standard pictures, it really fits into the classification of things you have to see in person to appreciate. I recently took three semesters of the history of architecture, and more attention was paid to Frank Lloyd Wright than any other person. After visiting Fallingwater I have greater appreciation of his genius.
Posted by DJones at 1:13 PM No comments: 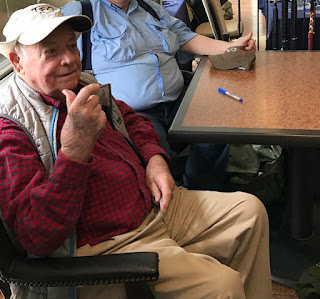 To Lefty I'm another familiar-looking face whose name he doesn't know, but to me he's a friend. I'm certain I'm only one of thousands who feel the same way.
Posted by DJones at 11:41 AM No comments:

Only real snow of the season. 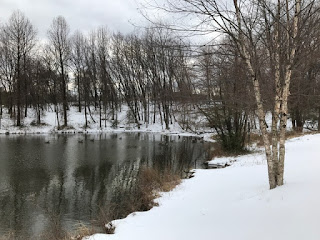 As Pam says, daffodils are hardy. 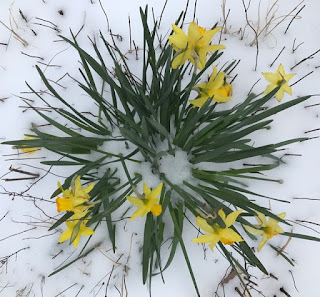 Posted by DJones at 4:36 PM No comments:

Trip to Southern Maryland for a sad occasion

Drove down yesterday to attend the funeral services for my friend Charlie Anderson's wife. It was one of those services that although I never actually met the deceased by the end I felt I had known her. She clearly was a remarkable woman who was successful in everything she got involved in- academics, career, politics, community affairs and, most importantly, family. The service was longer than most because so many people wanted to share their thoughts about her, but it certainly never got tedious.

The event took place in a Presbyterian church much like the church I grew up in. Although I haven't entered a Presbyterian church in about 40 years, everything was familiar. Two of the three hymns I knew well, and I remembered most of the words of the Apostle's Creed and the 23rd Psalm to recite with the rest of the congregation. Funny how things you learn when you're young stay with you.

I've gotten to know Charlie Anderson over the years from an internet message board called, for obscure reasons, the Moo Board. The common interest was fishing, but that subject plays a lesser role in current discussions than in the past. Periodically over the years, we gather together for lunch. I sat next to a member, Tom, at the church, and socialized over lunch with another, Fritz and his wife, at the reception afterwards. 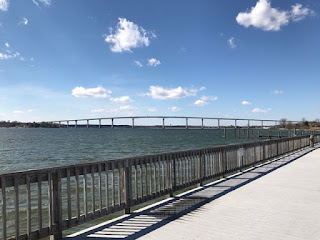 Before driving home, I took the above picture outside of the restaurant where the reception was held. In the background is the Thomas Johnson Bridge over the lower Patuxent River. The church was just over the bridge on the St. Mary's County side of the river, and the reception was on Solomons Island on the Calvert County side. The weather was sunny but cold and windy.
Posted by DJones at 3:18 PM 1 comment:

Spring is arriving on campus 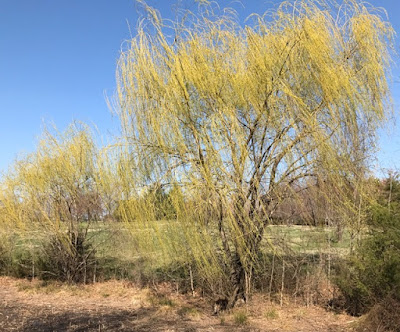 The weeping willows come in early and are always welcome when they do.
Posted by DJones at 12:40 PM No comments: 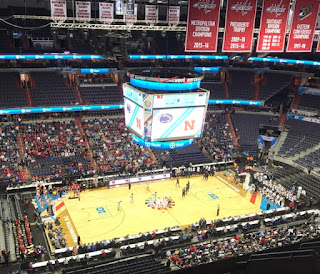 It's a tradition that is centuries old. Fly fishing is not normally the most efficient method of fishing, so maybe the periods of not catching fish lead to musing about the activity. Then, with the thought processes already going, when success comes it leads to other musings about why. Whatever the reasons, fly fishers write about their avocation. I can think of only two who are accomplished painters but many who are writers, and some of these writers are well known and respected literary figures.

I'm thinking about fly fishing and literature because of a book, Teaching Trout to Talk- the zen of small stream fly fishing, by Stuart Bartow, a professor of writing and literature at State University of New York. In 172 pages Bartow includes quotations from the following:

He also quotes from William Humphrey, Rick Bass, and Richard Brautigan who all wrote fishing pieces as well as novels. Then there are Harold Blasdell, George Harvey, and Izaak Walton who are known only for their fishing writings, as far as I know. And finally, Bartow quotes from The Odyssey, The Old Testament, Dr. Suess, and a number of Asian Buddhist writers and poets.

With all those literary references, one may wonder if the author has room left to include much about actual fishing, but he does and what he has to say is honest and accurate.
Posted by DJones at 12:15 PM No comments: