The book I recently finished, The Clockwork Universe-Isaac Newton, the Royal Society and the Birth of the Modern World by Edward Dolnick, I may not have read were it not for the college course on the history of science and technology that I just took. Most history courses focus on political history, but I think to understand today's world knowing the contributions of some great natural philosophy thinkers of the 17th century is more important than knowing the kings of the Stuart Dynasty or the major battles of the 30 Years War, all of the same century.

Of these great thinkers, Isaac Newton was probably the most important. He is the link between the Medieval and the Modern world. During his "miracle years", 1664-1666, he invents calculus and calculates gravity's pull on the moon. His Principia in 1687 explained his law of universal gravitation, "a single force and a single law that extended to the farthest reaches of the universe. Everything pulled on everything else, instantly and across billions of miles of empty space, the entire universe bound together in one vast, abstract web."Although much of his work was fully understood by few of his contemporaries, his genius was immediately recognized. Alexander Pope wrote, "Nature and nature's laws lay hid in night, and God said 'Let Newton be' and all was light."

And this genius of math and logic was as obsessed with God as any Medieval monk. Newton's motivation was to understand God and the universe that He created and probably believed that God created him for this purpose. He never traveled outside a small part of England, not even to see the sea although he was the first to explain the tides. He never married and died possibly a virgin at 84. He had a difficult and prickly personality and feuded with many people, most importantly Gottfried Liebniz, a German who was perhaps the second greatest thinker of that century. Liebniz independently discovered calculus at about the same time as Newton.

The feud between Newton and Leibniz was snide and petty and sometimes vicious. I find it somewhat comforting that these towering intellects behaved no better than the rest of us. The Clockwork Universe is an entertaining read as well as educational one.
Posted by DJones at 2:54 PM No comments: 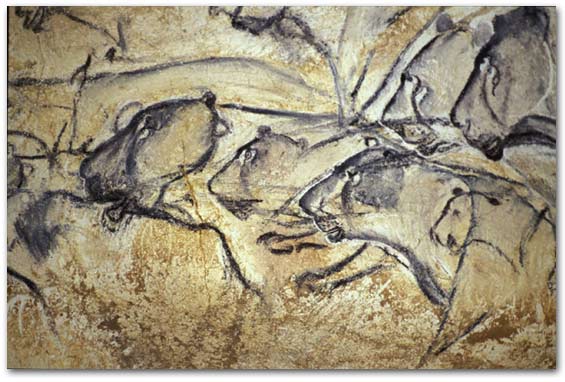 Daughter Rebecca, who is studying for a masters in art history, saw the movie in 3-D in New York. I'd see it again if I had the chance to see it in 3-D.
Posted by DJones at 1:52 PM No comments:

High water on the Patapsco

But fishable. Reading was 2.4 at Hollofield, and I don't think I'd care to fish it when it's any higher. No trout, no bass, but a few bluegills saved me from being skunked. Stumbled and got some water in my waders but didn't get hurt and was able to continue fishing.

It's been a wet spring and very wet in the Potomac watershed. Water level at Little Falls was over 10 feet yesterday.
Posted by DJones at 8:28 PM No comments: 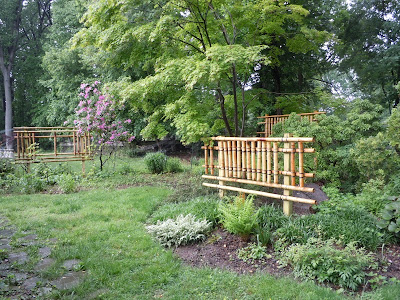 When wife Pam retired a few years ago, our roles regarding landscaping reversed. For most of years we've been in this house I've had primary responsibility, but since then it's been mostly her. Whichever has been the case, we've talked over any major changes and disagreements have been rare. Also, the person with the secondary responsibility has always had a garden section which was largely theirs to do with as they wished.

For me, this section has been the bedding area which runs along the property line of our shallow back yard. Last summer, the whole back yard took a beating when storms knocked down some very large tree limbs and the deer fence. Between the immediate storm damage and the resulting deer marauding, it wasn't much to look at and the bamboo project was an effort to make our back view pleasing to us again.

I'm happy with the results of that bamboo work, and nature has its own powers of restoration, fortunately. Now I have to decide about supplementing the perennials, trees, and shrubs with annuals. Although I like the way the garden looks now without them, experience has taught me that by late summer I'd miss the additional color annuals bring.
Posted by DJones at 1:40 PM 2 comments:

Twice this week at the pond. Monday I caught a mess of bluegill in the shallows, and yesterday bluegills and a largemouth about a foot long. Monday's fish came on a SHWAPF, and yesterday's on a yellow foam spider. Both days I started with a marabou streamer looking for trout, but didn't get any because I suspect they're in the deepest coolest water they can find. Lily pads are out and have been for a couple of weeks.

Last week at the Patapsco I caught bluegills, a bass, and a nice rainbow trout. Right after I got the trout, the hatchery truck went by to stock the upper part nearer to the Daniels dam.
Posted by DJones at 11:44 AM No comments: 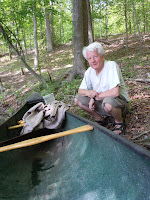 The weather has been beautiful this week and school's out, so Pam and I got out in the canoe yesterday. Enjoyed the day and saw some wildlife. 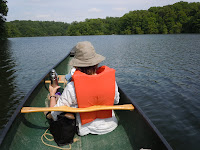 I was more cooperative than she about 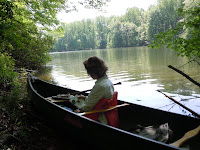 posing for a picture.
Posted by DJones at 1:19 PM No comments: 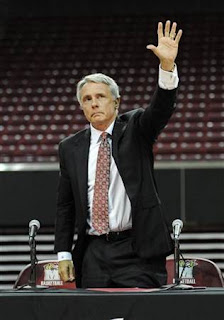 Thank you, Gary Williams, for 22 years of Maryland basketball. I forgot my camera for today's farewell press conference, so I pulled this image off the internet.
There were a lot of misty eyes among the thousands at Comcast Center today, and according to the University president, the building will bear your name soon. I think that's appropriate.
Posted by DJones at 8:31 PM No comments: 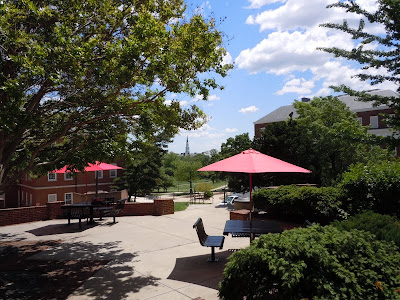 Saturday at Fells Point in Baltimore 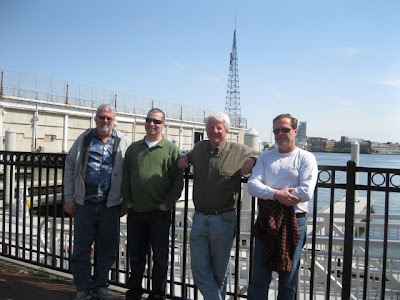 Pam and I met a few of the guys I've gotten to know from the internet. The group originated from a fishing message board which some of us broke with to talk about other subjects other than fishing. We periodically get together for lunch, and previous lunches have taken place in Arlington, Virginia, Washington, DC, and Annapolis and Deale Maryland.

Pam was a very good sport about coming along because much of the lunch activity was drinking beer and talking fishing neither of which she does. Nevertheless, she charmed all the guys, and one of them later posted that "she obviously lost a bet with God" which is their way of complimenting the wife and good naturedly insulting the husband.

We met at a old tavern named The Wharf Rat which is apparently known for the variety and quality of its draft beer. After a few rounds we proceeded, perhaps a little unsteadily, to Bertha's for lunch. Bertha's is well known for its mussels, and it lived up to its reputation, spread chiefly by bumper stickers which it has freely distributed for years.

As fishermen we are drawn to water, so we walked out to look at the harbor and to take a few pictures before heading back to The Wharf Rat for one last round. Pam took the above shot of the group, and Andy, the youngest member of the group took the picture of Pam and myself. 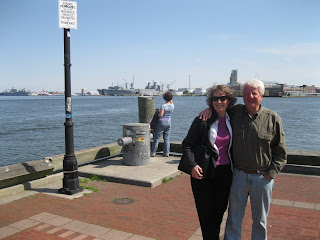 Posted by DJones at 5:21 PM No comments: