In the past few weeks I've made a couple of trips to the pond and caught bream both times.  The first time I caught about three and the latest trip, Monday, I caught one.

I've also done out for trout twice.  The first trip was to the Little Patuxent where I caught a couple of fallfish.  On the other trip to Morgan Run on Tuesday, I caught nothing.  My waders were leaking when I found some rising fish, and I was getting somewhat uncomfortable by the time I realized there was a hatch of small, black stoneflies.  I have some patching to do of the leak.
Posted by DJones at 8:47 PM No comments:

Conference of the Birds

Yesterday afternoon I attended an excellent jazz concert at the University of Maryland which featured performances by two of the professors in their jazz program within the music department. The concert was appropriately titled "The Jazz Professors" and was as educational as it was entertaining.

Before each number, one of the professors would give a short talk about the piece, the composer, and the significance to the history of the music. The pieces were performed in more or less chronological sequence beginning with Jelly Roll Morton's "Dead Man Blues", a song probably about a hundred years old.

One of the last songs on the program was composed by bassist Dave Holland in 1972, and I listened to that album often in those years. Although until yesterday I probably haven't heard it in 30 years, I always found the melody of "Conference of the Birds" so haunting I can summon it into my mind's ear anytime. It was a real treat to hear it live.

Link to listen to the original. 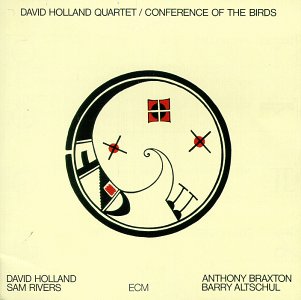 When I awoke yesterday morning, my wife strongly recommended that I listen to an interview with Camille Paglia, the controversial commentator on art, politics, and anything else that strikes her fancy, so I accepted the ear bud to her MP3 player and listened while in bed.  Among other comments, Paglia criticized art academics for their secular humanist scorn for anything religious.  Although herself a skeptic of traditional religion, Paglia maintains that religious fervor has produced some of the greatest art in history and to dismiss it is to lose something vital in Western Civilization.  I can't say that her words influenced how I had planned to spend my day, but when I returned home in the evening I reflected how my day contained significant doses of both art and religion.

After my morning geology class and lunch at the Student Union, I walked to the Clarice Smith Center and there I listened to a brief mid-day concert of Bach's NUN Komm, Der Heiden Heiland BWV 61 inspired by passages from The Gospel of Matthew and other parts of the New Testament.  "Music's only purpose should be the glory of God and the recreation of the human spirit"  Bach once said, and while I don't know if any Creator felt glorified, I felt my spirit uplifted by the voices and the instruments. 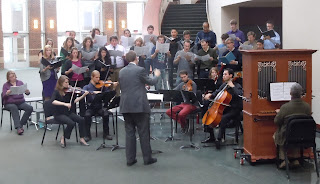 In the foreground below is one of the featured soloists.  That most of the performers were in their regular street clothes made the event casual, as if an interlude of beautiful music should be a normal part of the weekday. 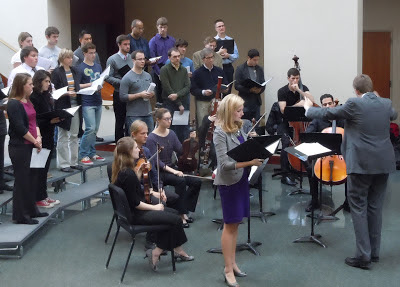 After that I proceeded to the campus Art Gallery for the new exhibit "What It Is, What It Was:  Music Video As Art."  When I was a young man in the photographic industry, there was general agreement that combining rock music with visual images was going to be big, but when MTV arrived I was disappointed with the quality of the short films being created for the music and haven't watched many of these videos over the years.  I never even got around to watching a widely praised one by one of my favorite singers, Johnny Cash, although it's been around now for ten years.  I got my chance yesterday because Johnny Cash's "Hurt" is one of the videos chosen to be projected wall size as part of the exhibit.  Ms. Paglia would have approved because Christian imagery is a major component and is appropriate because Cash was an intensely religious man. 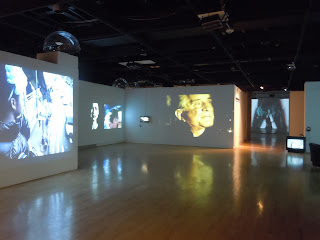 Radiohead, R.E.M., Tom Waits, Kanye West and other recording artists are also featured in the exhibit.  I spent about an hour there and plan to return.  It's art as far as I'm concerned and worth serious looks and listenings.
Posted by DJones at 12:31 PM No comments: 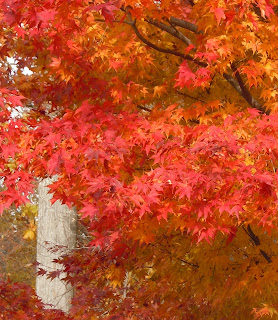 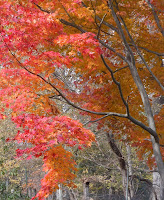 Not all trees reach their seasonal peak at the same time. 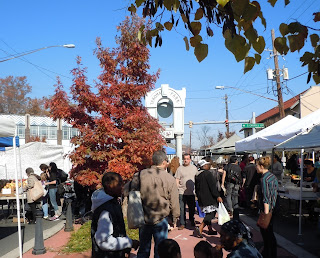 There are a number of good ones nearby, but we go most often to Takoma Park. 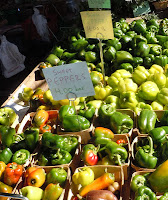 We went yesterday.
Posted by DJones at 12:57 PM No comments: