Been out twice in the last few weeks. Drove up to the upper Monocacy two weeks ago which gave me a lot of bluegill action, especially in the first hour, but yielded no bass. It was on a Friday, and by afternoon I was joined by two other fishermen who likely were going after work.  They were both courteous and did not infringe on waters I was fishing, but in about a half dozen previous trips there this was the first time I'd seen any other fishermen at all.  I think my "secret spot' is secret no more, and this might be the reason I've had less luck there on the last two visits.

Last week, I drove to the Gunpowder River. Caught a brook trout which is an unusual catch for me.  It was small but beautiful.  I cut the trip short because my back was hurting.  The cause, I suspect, was the weight of my fishing vest.  I'll think about trying to reduce its weight by eliminating items I seldom use.

I haven't fished the pond lately, but I'm including this picture anyway.  We've received some rain in the over the past 24 hours, and the rain is predicted to continue through the weekend.  Then a hurricane might move in.  Hope not. 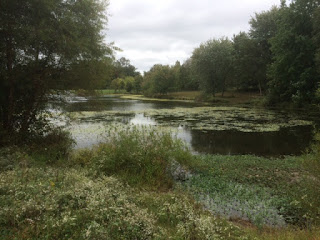 Posted by DJones at 7:32 PM No comments:

The wind made fly fishing difficult today on the Potomac, so I quit after two good-size bluegills on a surface bug. Although I had been on the river for a couple of hours, I spent more time wading than actually fishing. I then decided to hang around the C&O Canal drying off on this beautiful day. 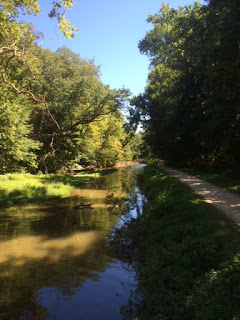 A tributary, Muddy Branch, flows into the river just upriver from Pennyfield, and the engineers who designed the C&O Canal about 170 years ago had an easier time than they had upriver for the Monocacy since the required aqueduct for the much smaller Muddy Branch was much simpler: 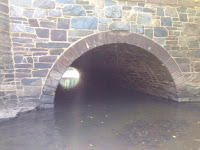 During the Civil War, there was a major camp for Union soldiers along Muddy Branch.  Although I was unable to find out how many were stationed there, I seem to remember hearing during a course I took on Montgomery County archeology just after retiring that there were more Union soldiers in the county at the time than residents. I guess it was prudent to defend Washington with many troops especially since the county was generally pro-Confederate in sympathies.

Water levels were 2.9 at Little Falls which is about the same as they've been despite the heavy rain we received (finally) on Saturday.
Posted by DJones at 9:04 PM No comments:

That's how Pam described it this morning, and it's true that today's sunny, clear sky is reminiscent of that terrible day 14 years ago.  I'm prone to superstition about weather and significant days. When I was young I thought Good Fridays always seemed to be rainy and gloomy.  They weren't always, of course, and even when they were, raining days are hardly unusual in the spring just as clear days of low humidity and bright sun are not unusual in the early fall.
Posted by DJones at 11:58 AM No comments: