May in the Park

Geese family.  Goslings are huddled to the right of the base of the tree: 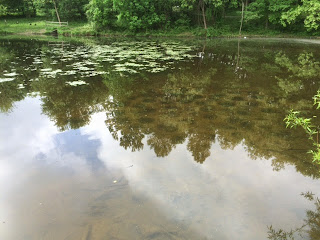 Posted by DJones at 9:50 PM No comments:

Much has been written about this series which ended last night.  Much has been written because there's so much to say about a thoughtful drama which spanned an important decade in American history and covered many of the societal changes, chiefly the new sexual freedom brought about by the use of birth control pills and the emergence of women and minorities in the workplace.

Some of the themes are not tied to any decade, however.  A main character who recreates himself is also present in The Great Gatsby, and creativity springing from a sense of being outside the mainstream is a timeless story.  It is ironic that the main character, Don Draper, looks and acts so much as the classic WASP insider of the period and yet never escapes the knowledge that his theft of an identity and created persona mark him to himself as forever the outsider.  Much of the creative genius of his advertising production probably comes from this sense of feeling as the outsider even though this feeling is also the source of his anguish and alienation.

We watched the series for the entire seven seasons spread over eight years and enjoyed and discussed each episode.  Someone has described Mad Men as a novel created for television, and that's the attitude with which I watched the 24/7 presentation of the entire series prior to the series finale.

Visually, it was to me the most consistently striking thing ever shown on TV, and I've been watching the tube for over 60 years.  Many of those images will stay with me forever.  Yeah, the writing, acting, music, etc. were all brilliant, but scenes like Peggy roller-skating around the abandoned office space to Roger's organ music and the ghost of Bert Cooper doing a song and dance number are in a class by themselves.
Posted by DJones at 11:18 AM No comments:

Left the marina Wednesday at sunrise on his boat, Liquid Assets II. 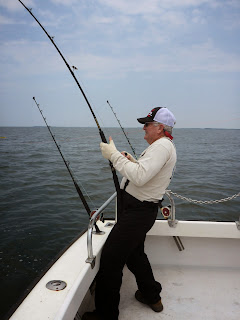 Capt. Billy unhooking one of the fish: 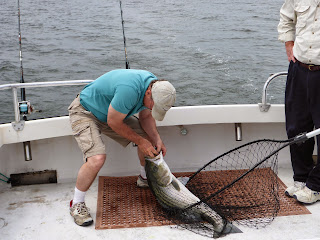 Posted by DJones at 8:34 PM No comments: