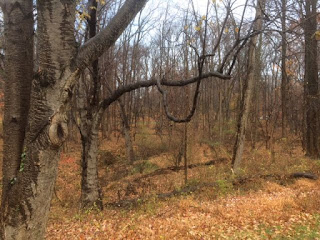 Today during my walk in the park.
Posted by DJones at 2:53 PM No comments:

Greg and Rebecca photographed by Pam. The kitchen is in Dave and Jane Powell's house where we traditionally have Thanksgiving dinner. 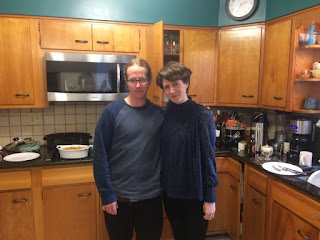 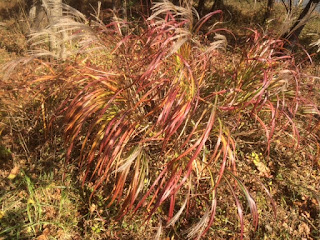 This plant was across the street in the park, probably less than 60 feet from our yard, and  almost certainly it came from one of our plants. Nature doesn't recognize property boundaries. 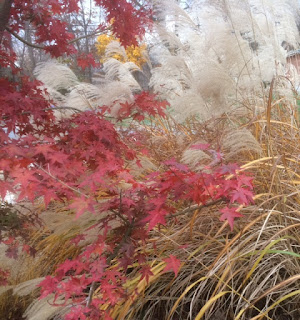 The bottom picture is a nearby plant seated closely to a maple tree in our yard. It may or may not have been the parent.
Posted by DJones at 4:03 PM No comments:

Fourty-seven years ago this past Tuesday

Saturday morning I got off the DC Metro train at the Archives Station and walked the few blocks down 7th Street to the National Gallery of Art. Noting that I was early for the designated time for my art history class, I walked around to the Mall entrance, just as a change from the closer side and back entrances I usually use. As soon as I reached the steps, I had a strong memory flash to a November day much like this one but many years ago. This is where we gathered for the March on Washington to protest the Viet Nam War in 1969.

The weather was remarkably similar that day, sunny with a bright blue sky and air temperatures in the 60's. I remember being comfortable in the light wool shirt jacket I wore that day and still own, I believe. I also remember the small 35mm camera I used to photograph the event but have no idea what happened to the slides.

The actual March I have little specific memories of. We proceeded, I believe, to the Washington Monument grounds, 500,000 strong, to listen to speakers and music. Crowds sometimes bring about a sense of claustrophobia in me, so I tend to skirt the edges rather than immerse myself in the middle. I'm like that now, and I was that was then. Staying on the move gave me more photo opportunities, and although the pictures are gone some of the images remain in my head.

When those memories came rushing back to me Saturday, I wondered if the date was the actual anniversary of the March. Later I checked and it was close because the anniversary was November 15th which was Tuesday. It was the largest of Viet Nam protests, but the war dragged on for, how many years? Three? Four? Five? How many more deaths? In the thousands, certainly. I sometimes wonder if we did any good.
Posted by DJones at 4:54 PM No comments:

This caught my eye today...

The light autumn leaves against the dark green background was the most visually interesting sight on my walk today. 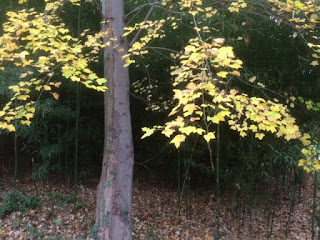 Posted by DJones at 8:20 PM No comments:

Pam took this shot. Clarence likes to bury himself under quilts. 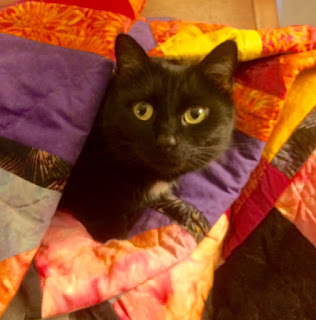 This afternoon at the Upper Patuxent 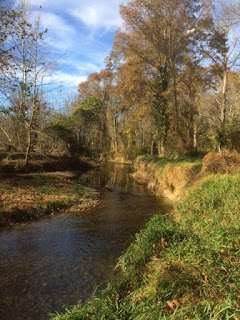 Rather than watch the coverage of the election results on TV Tuesday night, I decided to attend the chamber jazz concert at the Clarice Smith Center for the Performing Arts at the University of Maryland. 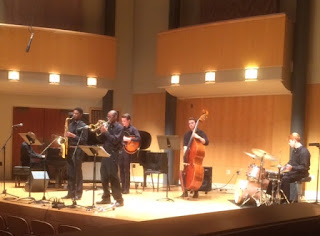 Yesterday was a beautiful day in the woods, however, with temperatures a very unseasonable 80 degrees I wished I'd had more water and fewer clothes. 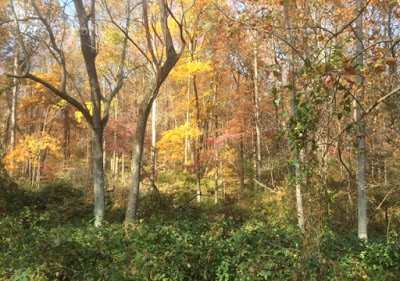 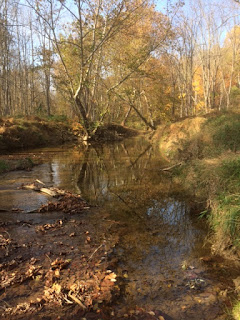 Deep Autumn in the Park

Many years ago I decided that the foliage change "peak" was on Halloween here. Often when that day approaches I start second-guessing and wonder if it may be coming late or that it may be a year with less impressive colors. I usually end up deciding that both those possibilities are subjective and highly dependent on where you're looking.

On a chilly and cloudy afternoon, this was the scene which most caught my attention while walking around the pond. It's typical of this time of year there. 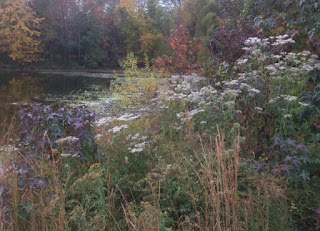 Posted by DJones at 6:16 PM No comments: