Consolidated list of diving duck visits to the pond

The normal waterfowl at the pond are the Canada Geese, who are there almost all the time, and Mallards who visit often. Those we tend to take for granted while unusual visitors are noteworthy, and we tend to haphazardly record the sightings. The haphazard recordings are either on this blog or on scrap pieces of paper placed in one of the bird books we used to verify the species, and are usually diving ducks.

December 26, 2011(and three weeks prior): We believed the single duck was a Lesser Scaup

February 29, 2016: Five ducks total, one with a bronze head which appeared to be a Redhead duck. Three of the others appeared to be male Ring-necked ducks, and the fifth was a dull brown color. It was almost certainly a female, but it could have been either a Redhead or a Ring-neck.
Posted by DJones at 4:39 PM No comments:

Yes, I can't help myself from taking what are probably near identical photos every year, but they are such beautiful flowers and bring promise of warmer weather. 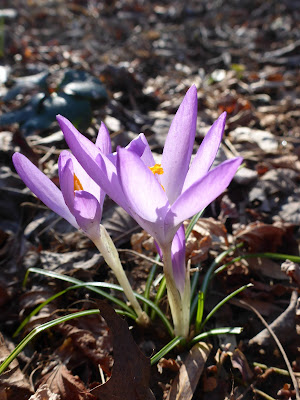 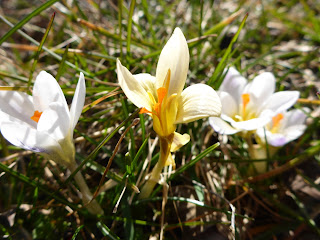 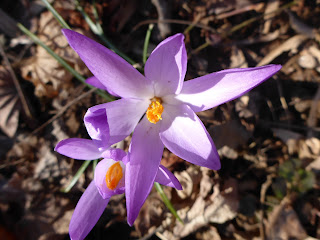 They present a different feel to familiar scenes... 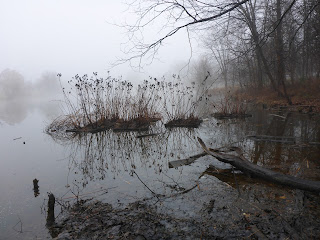 And from the east end looking west: 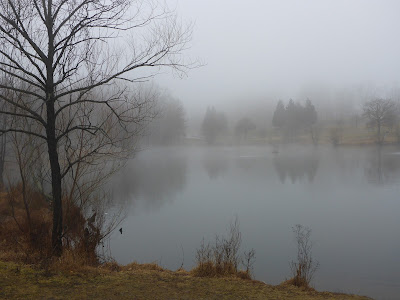 Posted by DJones at 4:10 PM No comments: 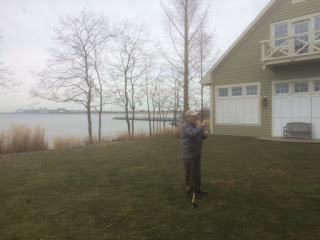 Here he's rigging up a fly rod in preparation for a casting demonstration at the annual Tiefest event on Kent Island.  That's the Bay Bridge in the background.

Lefty is probably the most famous fly fisherman in the world, and we're lucky that he continues to live in his native Maryland. He's a hero for many of us, a WWII veteran who fought in the Battle of the Bulge. I find him inspiring to be around and always learn something every time I watch him cast and hear his commentary. Also, he's funny as hell.
Posted by DJones at 7:58 PM No comments:

A few years ago my doctor recommended that I walk at least 150 minutes weekly which works out neatly to 1/2 hour, 5 days a week. I adapted well to this recommendation since I like being outdoors in the fresh air, and I usually do my walking in the nearby park which provides wildlife and plants to view. Pam sometimes goes with me and once or twice a week my friend Stan who lives on the other side of the park meets me in the middle. Having someone to talk with seems to shorten the time.

Before long I was considerably exceeding the minimum amount because I became addicted to the point that I feel uncomfortable on the few days when I'm unable to walk. Those exceptions usually occur because of obligations such as travel or multiple appointments. College classes don't pose a problem because I just do the walking on the large University of Maryland campus.

Weather is seldom a factor during the warmer months because walking in the rain doesn't bother me as long as I wear a rain slicker. Cold weather onto itself won't keep me from going out, but a cold rain or snow is something else. On such days during the school year I head for Cole Field House on campus where I encounter other walkers and runners on the concourse of the large athletic building. Unfortunately, Cole is undergoing a major remodeling which makes it unusable for these activities, and the Comcast Center which replaced Cole for basketball games is often restricted.

Fortunately, we have treadmill in our house which has been idle and collecting dust for years. Other household members have used it in the past, but I never developed much of a fondness for it. Recently, however, necessity has caused me to reconsider it. I've found that listening to music while using it relieves the boredom and works pretty well for me. Keeping the lights out in the room prevents me from focusing on the treadmill timer which detracts from the music and makes the time seemingly pass more slowly when it  grabs my attention.

Walking outdoors will always be my preference, but I'm glad I now have a tolerable indoors option.
Posted by DJones at 8:39 PM No comments:

The Patuxent is the longest river which lies completely within Maryland's boundaries. Near the headwaters the river is a designated trout stream, and the surrounding land is a state park.

Although most of the park is forested, the section I prowled around this afternoon, near the Howards Chaple Road crossing, contains many open fields. 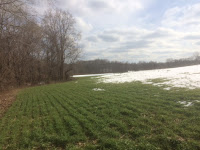 In the woods I came across this stone fence which goes back to when it was all farm land. 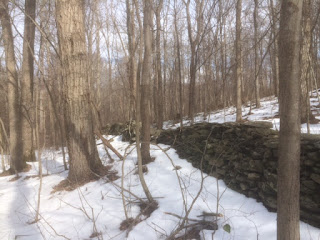 These sights make me wonder about how long ago the fence was erected and about the farm family who lived there at the time.
Posted by DJones at 8:05 PM No comments:

Will my life be changed? 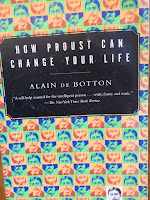 I just finished reading Swann's Way, the first volume of Proust's In Search of Lost Time. Although this current translation of the overall title is more accurate to the original French, I prefer the original Remembrance of Things Passed as more poetic, which is no doubt because the phrase was lifted from a Shakespearean sonnet.

Whether or not I'll proceed to the other six volumes, I don't know. This first volume was over 400 pages, and the others must be about the same length because the total number of pages is over 3,000. Swann's Way stands on its own as a novel, so I don't feel a need to read further to attain a greater understanding of what I've read. Since I enjoyed it, however, I like having the option of reading the remaining volumes at any point in my life.

No, I don't think reading Proust will change my life, but I certainly had to adjust my reading style. The sentences are so long and the descriptions are so detailed that I had to go very slowly. That's a good adjustment for me because I normally have a tendency to read too fast which can lessen appreciation of good writing. Once I adjusted, I found that entering into Proust's world was worth the time.
Posted by DJones at 3:16 PM No comments:

The house after the big snow storm

I took the picture last Sunday before learning of my brother-in-law's death. Somewhat in excess of two feet of snow fell, and a week later although we've had a number of warm days much of it remains. 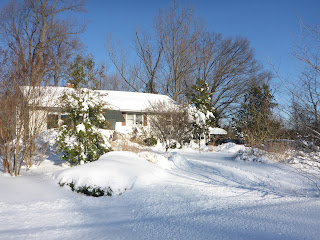 Posted by DJones at 2:50 PM No comments:

Sam was married to my sister Elaine for 47 years. Since we all went to the same junior and senior high schools, I believe I've know Sam for about six or seven years before we became related by marriage. He was a wonderful husband and father and beloved by many.  He died a week ago Sunday, January 24, right after the big snow storm, and I still find it hard to accept that he's gone.
Posted by DJones at 2:39 PM No comments: