At Brookside Gardens with Rebecca and Sean 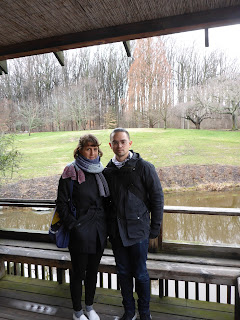 Nice to have daughter and son-in-law with us for a few days over the holidays. 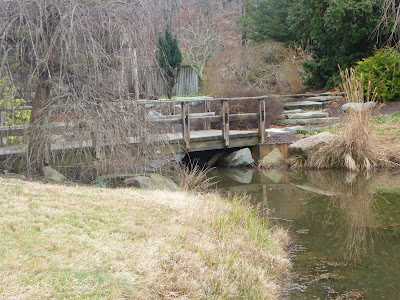 Recently Pam and I have gotten interested in crows. In addition to the suet Pam puts out, we have started tossing bread, peanuts, and egg shells, and the birds come to feed in groups that can be as much as a couple of dozen. 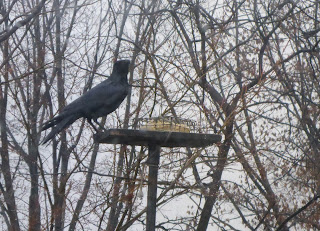 Besides feeding them, we also are reading books about this intelligent species. Some of the well-documented stories are fascinating. One story concerns a husband and wife in Canada; she fed and spoke gently to the birds while he cursed them angrily. The crows were not only aware of the differing attitudes but also took note of the different cars each drove and bombed his car with their droppings while leaving hers untouched. Crows have been captured on film using sticks as tools to reach food and dropping nuts on highways so that the passing cars would run over them and break them open as the birds watched to retrieve the food when the car drove on.

One library book was not exclusively about crows but included information about local crows that we had known a little about. Thirty years ago I had an office that over-looked some trees along Montrose Road in Rockville. At sundown in winter an enormous number of crows gathered in these trees. It was a highly urbanized section of the suburbs then, and in subsequent years became even more so. Nevertheless, the crows continued to roost in that area to the dismay of many of the merchants in the nearby shopping centers. As part of her investigation, the author of this library book called an old man who grew up on a farm near Rockville, and he told her that he remembered the large massing of crows in that spot back in the 1930's when there was an airport there. The author was looking into the Montrose Road crows in the 1990's and raised the question that if the crows were behaving that same way 60 years ago can we speculate that they were also showing the same patterns hundreds of years ago?

Last Sunday, Pam and I set out a little before sundown to see for ourselves what was currently going on with the crows in that area. We spent a couple of minutes driving around near the intersection of Rockville Pike and Montrose Road without seeing any crows until we spotted a group just to our north. We parked in a shopping center lot directly under where they were flying, and to our delight we watched thousands of crows pass over us going west to east for the next 10 or 15 minutes.

Over the decades, the once agricultural fields gave way to office buildings, shopping centers, and high-rise apartments, but the crows continued to do what they had done before. The experience of this natural phenomena in this heavily commercialized area was both novel and exhilarating. Neither still nor moving pictures can truly capture this experience, but here is a video Pam took:

I don't like exaggeration, so I later worried about how to accurately describe the numbers we saw. The next day in the park I saw a group of migrating Canada Geese which were easy to count as they rested on the pond, and I counted 160 of them. I am confident that the evening before I saw 10, 20, or even 30 or more similar groups, so describing the total as thousands is justified.

Posted by DJones at 8:42 PM No comments:

When I'm doing my morning exercises I like to have the TV on, and Thursday I saw some of an old movie called "Thunder Road." I had seen it before, but I remember the title song much better. It was sung by Robert Mitchum who starred in the movie and was such a favorite in my neighborhood that the boys all sung it on the junior high school bus.

That part of the DC Maryland suburbs was full of families who after WWII moved there from small towns and rural areas, often in the Appalachian Mountains, and the story "about the mountain boy who ran illegal alcohol" (as the song lyrics go) was like a folk epic to many. We loved certain kinds of outlaws, and in the car culture of the 1950's and early 60's transporting moonshine in a hot car was about a cool an outlaw as we could imagine. Bruce Springsteen later wrote a song with the same name, and I've read that he took the name from a poster he had once seen of the movie.

Driving to the dentist a few minutes later, another song by Steve Earle came on the radio. "Copperhead Road" tells a story about a young man who could have been the son of the main character of "Thunder Road." He sings that his father and grandfather made moonshine, but after two tours in Viet Nam his plan was to grow marijuana in the same area of the surrounding Southern mountains- Copperhead Road. Having "learned a thing or two from Charlie", he warns, "you better stay away from Copperhead Road." He was ready to protect his illegal crop just as his father and grandfather had protected their whiskey still in the same woods.

I think I've observed before that Americans have often made folk heroes of criminals, going back to Jesse James after the Civil War, Bonnie and Clyde in the 1930's, and the continued popularity of the Godfather movies.

All in an afternoon on campus

First I attended a performance of a Bach Cantata at the Clarice Smith Center for the Performing Arts. These take place a couple of times a semester, and there are very few things that can lift your spirit like hearing a beautiful choral and orchestra piece performed live at mid-day. Back in November 2012, I took a number of photos at a similar event, so I didn't today. I just sat and soaked it in.

Next I had planned to view a new exhibit of faculty art at the Art Gallery in the Art/Sociology Building. I knew that the building was going to be re-named for Parren Mitchell, but I didn't realize the dedication was today. I remember the late Mr. Mitchell well as the first African-American Congressman to represent Maryland but had forgotten until today that he actually was the first of his race to attend the University of Maryland in the early 1950's. He had to go to court to get that right despite being a WWII veteran who was awarded a Purple Heart. Since I was living in Maryland at that time, it made me feel old to realize I had lived through so much history. 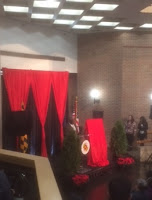 After the ceremony, I had a few minutes to view the art exhibit before proceeding to my History of Architecture class. You can pack a lot of variety into one afternoon at a place like the University of Maryland. 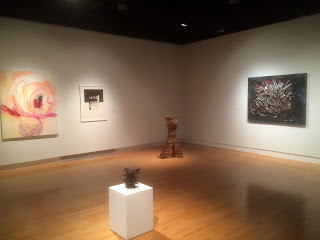 Posted by DJones at 7:36 PM No comments: