Floating plant islands at the park

These were put in the pond a year or so ago. In the winter they provide a place for the ducks and geese that is free from disturbance from people and their dogs, and in the early spring turtles crowd on to the islands to lay in the warmth of the sun.

Finally, in the summer the plants bloom for us all to enjoy: 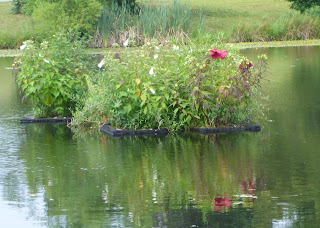 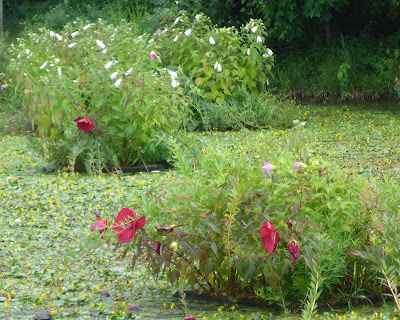 Posted by DJones at 8:27 PM No comments:

Back in the work force temporarily

Agreed to a consulting gig a few weeks ago, and it will run for a few more weeks. This is the second such deal that came my way since I retired six years ago. When I retired people asked me if I planned to do the consulting thing, and I answered that I wasn't willing to go out and market myself which would have been necessary for any kind of steady income. Besides, we live rather simply and don't really need the money.

The first consulting deal came in the first year of retirement, so this present one is my first exposure to the work world in five years. The experience is both familiar and new.

One oddity for me is having only one project to focus on and dealing with people with multiple projects, just as I always had when working. Last Friday, for example, I was expecting one important phone call and one important e-mail and all day wanted to be near my project file containing all my notes. Even though I kept the file with me the few times I left the house, neither the call nor the e-mail came, so I felt the day was somewhat wasted. Neither person was being really negligent by not getting with me that day, and during my work career I wouldn't have thought twice about it because I always had plenty of other things to do.

Technology has, of course, changed some things in the last five years but not everything. Not being certain of what has changed and what has not makes me uncomfortable at times. Real estate and industry-related numbers which were always in my head before are now often fuzzy or absent. The client seems satisfied though.

I have mixed feelings about the thinking I do about the consulting project in the off-hours such as when I'm taking a walk or lying in bed at night. When I'm in school those thoughts tend to be more elevating, like thoughts about history, philosophy, or the arts, and I'm happy to have them replace work thoughts. (Other thoughts, mundane or elevated, always take a back seat to fishing and sex in my head.) On the other hand, I kind of like this minor exposure in the competitive environment of the business world.

Will I do it again if the opportunity comes around? Maybe, but probably not during the school year. Also, I've seen in the last few days my involvement starting taking some turns I neither wanted nor anticipated. I took a stand that made this deal work out ok, but not before having a bad day that might make me think twice about accepting a future offer. Timing is also a factor.  Luckily this one came along at a time when the smallmouth rivers I would normally be fishing have been too high to wade because all the rain we got in June. The levels are getting close to acceptable though, and the rivers are calling. Fortunately, my work is wrapping up.
Posted by DJones at 9:20 PM No comments:

Flowers: In the park and in the yard

Wildflowers have done well with all the late spring/early summer rain: 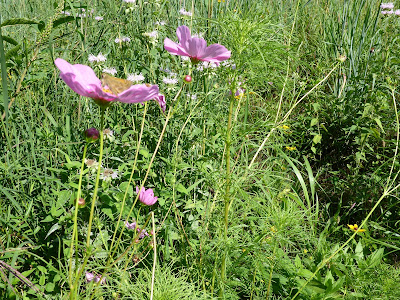 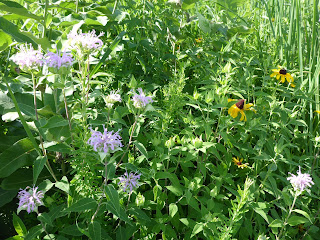 The four o'clocks, the white flowers on the upper left of the picture below, open in the evening and present a pleasant aroma to anyone approaching the front entrance of our house. 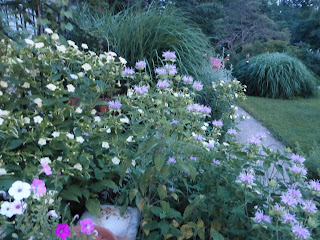 Neighbor Jim was kind enough to invite me to the Nationals against the Reds.  Early in the game it rained stopping the game for about a half hour.  After the rain ceased and as the ground crew was taking off the tarp, a rainbow appeared in the right field sky: 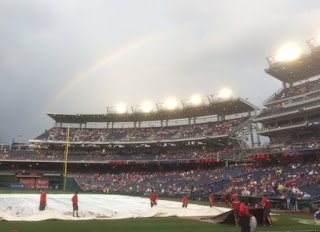 The game then resumed: 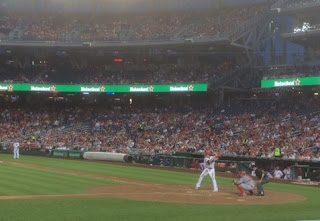 The sky, however, remained threatening: 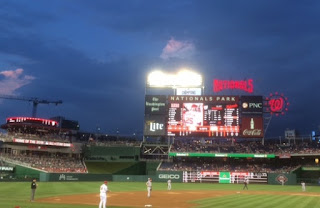 Light rain broke out once or twice, but not enough to delay the game again.  Although the Nats lost, we had a good time.  The seats were great, and my neighbor proved to be good company and a knowledgeable fan.
Posted by DJones at 3:33 PM No comments: