In addition to The Brothers Karamazov, I read three other novels this summer.  Although the authors are not likely to ever to placed alongside Dostoyevsky, they are generally respected despite working in lighter genres.

John Le Carre's Smiley's People was an excellent novel to read at the beach because there was sufficient time to read it in large chunks.  In smaller portions, such as in bed at night, the details would have been difficult to retain from one reading to the next.  Wars often produce writers who come to be associated with that conflict, and Le Carre might be remembered as the novelist of the Cold War.

Earlier this summer I read Carl Hiaasen's Bad Monkey.  Like his other novels I've read, it's a comically grotesque crime story with environmental themes.  Hiaasen is a native Floridian who's an avid outdoorsman, and underneath his humor is anger over the damage greed and corruption have done to his state.

I'm currently about to finish James Lee Burke's Light of the World.  Like Hiaasen, Burke's love of the outdoors shows in his writing.  Unlike Hiaasen's, However, there is very little humor in Burke's writing which generally feature acts of extreme violence.  This novel is set in Montana where I believe the author currently lives, but many of his books take place in his native Louisiana.  Both locations are accurately and vividly captured in his descriptive prose.  The plot of this one proceeds and climaxes like an action movie, but the observations about people as well as nature elevate it above similar stories.
Posted by DJones at 4:22 PM No comments:

Fished today on the Potomac near DC 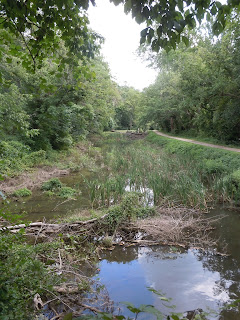 After scouting this location which was new to me, I had lunch while waiting for Lou and also took a picture of the C & O Canal.   We each caught a few smallmouth bass on crystal buggers and had a good time.  Water level was 3.02 at Little Falls.

Posted by DJones at 9:13 PM No comments:

Pam reading on the balcony of the soon-to-be-closed Bethany Arms Hotel: 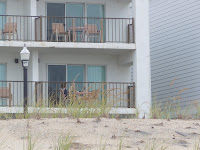 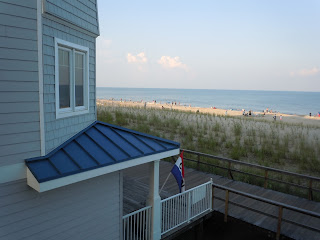 Late afternoon view from that balcony:
Posted by DJones at 9:03 PM No comments: 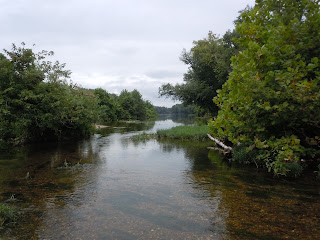 The big ones like Nolands are somewhat permanent while the tiny ones come and go.  The above photo is facing upriver, and I believe Nolands is on the right.

Fishing today was typical:  two smallmouth and many bream in three hours, all on the surface.  I spent too much time futilely using a weedless wooly bugger I tied yesterday when the fish clearly were only interested in feeding on top.  As on the last trip, a slider type fly was very effective.  Saw a bald eagle.  River lever was 1.98 at Point of Rocks and 3.00 at Little Falls.
Posted by DJones at 7:46 PM No comments:

For the second consecutive year I assisted at the Izaak Walton League booth today. 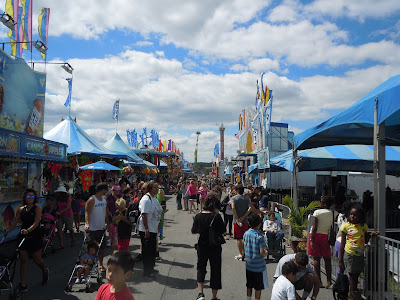 I took a little time to walk around to take in the scene.
Posted by DJones at 7:51 PM No comments:

Yesterday in the backyard... 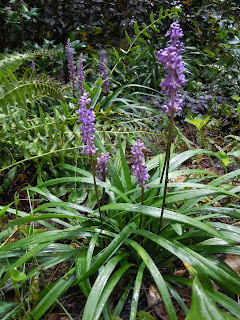 Some of the liriope are blooming:

Butterflies seem abundant this year.  I'm seeing lots of other photos of them by friends, so maybe it's not just our yard. 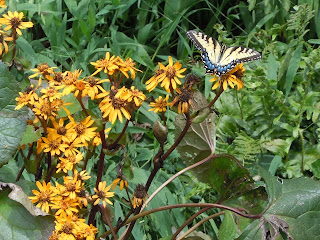 The butterfly is a swallowtail, and the plant is a ligularia. 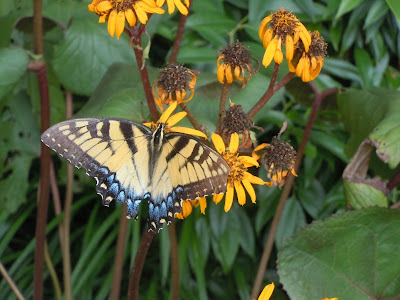 They were hitting surface flies today

on the upper Potomac at Nolands Ferry.  Three smallmouths but the major action was from big bluegills who wanted bass sized surface flies.  Great fun.  Water levels were 1.78 at Point of Rocks and 3.00 at Little Falls.
Posted by DJones at 7:34 PM No comments:

The view from the canoe... 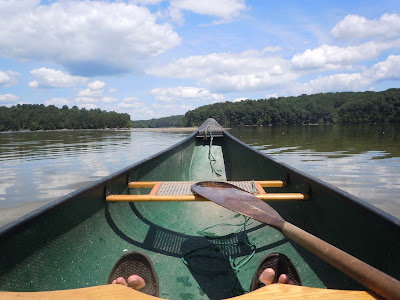 ...on Triadelphia Lake this afternoon.  Drifted and caught bream on a yellow head-head marabou streamer fly.
Posted by DJones at 8:25 PM No comments: