Although "opening day, for trout fishing was Saturday, I didn't get out because I wasn't feeling well. I was feeling better on Sunday, and caught a trout and a largemouth bass in about an hour of fishing. I used a spinning rod and a Mepps in-line spinner. I got another trout the next day, so we had enough for a fish dinner that night.

Then yesterday we had one of the few days lately of light wind, and I took advantage of it to try the fly rod. Using a marabou bead-head, I caught a really pretty good-sized crappie which I probably should have kept or at least photographed. I then caught another trout which I did photograph. It's indicative of the other two I've caught so far. 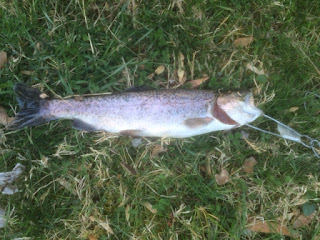 Posted by DJones at 5:42 PM No comments:

The latest issue of Virginia Wildlife magazine contains an article about vernal pools. Although I hadn't heard that poetic name before, I knew exactly what they were because I often encounter vernal pools while walking in the forest to a trout stream in the late winter or early spring.

Vernal pools are temporary bodies of still water and begin forming after trees lose their leaves in the fall and their need for water diminishes. The additional water in the surrounding soil fills natural depressions on the land creating a vernal pool. The pools continue to collect water during the winter and spring but generally dry out and disappear in summer. Vernal pools may vary in size from a few square feet to multiple acres. Their ecological function is much like wetlands because that's what they are. Like other wetlands, vernal pools serve as birthing areas for animals but, because of the pools' temporary nature, the animals are generally limited to fast-maturing amphibians such as salamanders and wood frogs.


On my walk today, I went down into the Paint Branch stream valley to photograph a small vernal pool there: 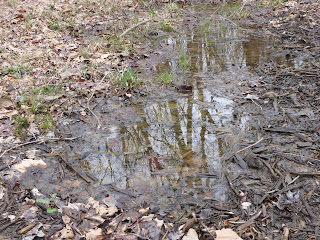 I know some larger ones less than an hour away, and maybe I'll get around to photographing them sometime this spring.
On the walk home, I stopped back to check on the ring-necked ducks that have been there since last month. Originally there were four plus a redhead duck who hung around with them. Now the other males have moved on probably because, as Pam puts it, the lady duck has made her selection. 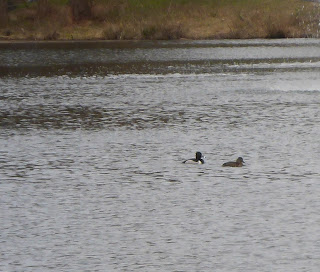 Posted by DJones at 4:12 PM No comments:

Pam and I are not birders although, like most people who enjoy the outdoors, we look at birds and try to identify and understand what we're looking at. My friend Larry Fox who died last year was the only real birder I knew, but I never really questioned him about his past-time although we sometimes went out into the wild together, he with binoculars and me with a fishing rod.

I have the impression that the term "birding" gained favor over "bird-watching" because some people didn't like the image of the old term which seemed to be presented in movies and TV as a predominantly feminine hobby that was often the subject for ridicule. Maybe when more men got interested in the activity, they decided they wanted to be identified with a new term that would be viewed as active rather than passive. Larry was a thoughtful person and would have had something to say about this, so I'm sorry I never got around to asking.

On a walk in the park recently, Pam and I encountered a woman who was obviously an enthusiastic birder. She told us about an on-line site where a person could instantly file a report about the species observed and the time and place. She said that an observation made from indoors, such as looking out from your house at a bird feeder in your yard, had to be so indicated, and she implied that such reports were somehow viewed as lesser than reports made from a person outdoors. At home we visited the site (ebird), but we didn't note such distinctions which may only be apparent when you actually complete the on-line form to submit a report. However, we did find the report the woman submitted that day, and she noted 18 species in an hour of viewing in the park.

The birder also mentioned that "our" park had been designated as a "hot spot" for seeing birds. That's nice to hear, and it's also nice that we now have an internet site to visit occasionally to see what the experts have seen there which we may have missed.

Hint of green in the woods

Some leafing out is starting along Paint Branch.

Not much green here, but I like the scene: 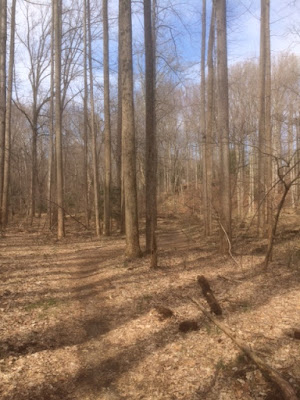