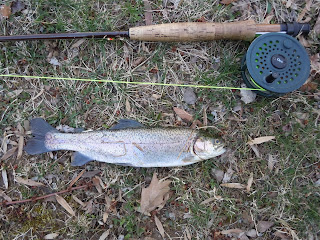 About a foot long on a bead head marabou streamer from the pond.
Posted by DJones at 6:02 PM No comments:

I think of your mother

And all the tears she cried

She would cry for none other

Than her little boy lost in a little world that hated

And that dared to drag him down

Natalie Merchant and Robert Buck of the rock group "10,000 Maniacs" wrote those lyrics in the 1980's, at least 20 years after I read On the Road for the first time. Kerouac is on my mind because I just finished reading his novel Desolation Angels which was written just prior to the publication of On the Road which made him famous.

Desolation Angels never achieved the popularity of On the Road and represents the flip side of the earlier novel as Angels is as dark and downbeat as Road is life-affirming. In it Kerouac has already begun to dislike the Beat Generation which he more than anyone was responsible for creating. I think he detected a faddish insincerity about those who saw themselves as following the Bohemian footprints of Kerouac, Ginsberg, Corso and his other friends, and the movement declined into a "postured, actually secretly rigid coolness soon to become a fad up to the mass of middle class youth." The depression of Desolation Angels is probably fueled by Kerouac's growing alcoholism which contributed to his death before he reached 50.

He lived most of his later years with his mother who he pictures with love in this book and is why Merchant and Buck's lyrics above came into my mind. Kerouac was a courageous man of almost saintly sensitivity, an athlete good enough to be offered a college football scholarship, a heterosexual whose two closest friends were gay. Most importantly to me, he was a great writer. I'm not surprised his books are still read half a century later, and I believe they will still be read a half century from now.
Posted by DJones at 10:00 AM No comments:

And the fishermen came... 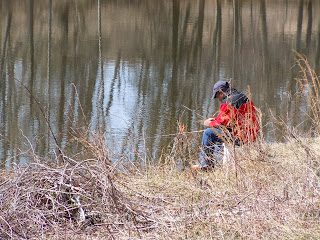 To the pond for the first day of trout fishing.


The residents had to be tolerant of the
newcomers. 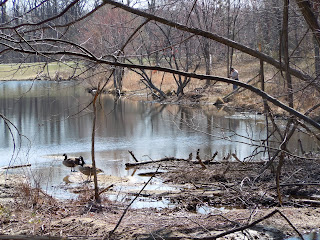 Late winter is a desolate time... 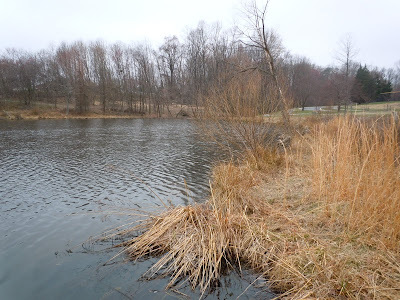 Even when we're two days into spring by the calendar. There certainly have been spring-like days with temperatures in the 60's and even a few days in the 70's, but today is winter-like. Right now, the temperature is 47 degrees which isn't so cold, but the dampness in the air makes you uncomfortable.

Although the weather hasn't been as severe as last year, every winter gives the land a beating and it shows. 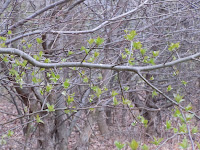 However, the budding of the trees gives you hope of better things to come. 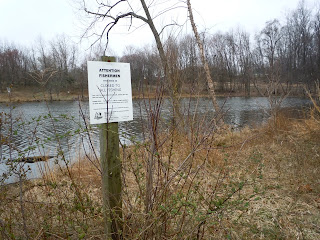 The sign indicates that the pond has been stocked by the state, and is closed to fishing while the fish acclimate themselves to their new surroundings. Saturday, the fishing will reopen and the fishermen will come.
Posted by DJones at 3:59 PM No comments:

Lately I've been thinking about my wife's looks

She is quite beautiful, you see. A few nights ago we had dinner at another couple's house, so I was sitting across the table from her for a few hours. At 64 she is still amazing to look at. A year ago, we went to a high school reunion, and she was easily the best looking woman there. She was very pretty in high school, but there were many other pretty girls in our class. Now, she really stands out.

Now, some will read and think, "How nice. This man really loves his wife, and even though she's aged she is still beautiful to him." That's true, but she is also quite striking to people who are just seeing her for the first time. A couple of years ago she visited me at work, and I introduced her to two men I'm close to there. Later that day after she left, each separately said essentially the same thing to me: "Hey, you're kind of robbing the cradle there, aren't you?" No, she's actually 23 days older than me. About a year ago a guy I've known for a few years became somewhat tongue-tied upon meeting her for the first time.

On top of all this, she has many other outstanding qualities beyond her appearance. She is smart and has an inquisitive mind and a good sense of humor, all of which makes her an interesting conversationalist. She is an excellent cook and a loving and attentive mother to our children. I've been told I'm a lucky man by people who don't even know all this. They just say I'm lucky because they've seen her. They don't know how lucky I really am.
Posted by DJones at 9:37 AM 3 comments: