When the band Little Feat first recorded this song Pam and I had just turned 30, and being "old folks" seemed a long way off. We saw them live at about that time, and I doubt that we considered the possibility we would be attending a Little Feat concert again almost 40 years in the future. But there we were at the Warner Theater Monday night with our friend Stan.

Entering the theater and passing by the busy bar downstairs, we noted that most of the crowd seemed in our age bracket. When the band came on stage and ripped into the opening song, "Rocket in my Pocket", all us old folks cheered and whistled and absorbed the power of the music for the next two hours. Many of the songs brought the audience to its feet dancing to the band's infectious rhythms. The crowd was enthusiastic, bordering on rowdy (fueled possibly by that busy bar), and that's the right atmosphere for rock and roll. I was proud of my peers for retaining that spirit.

I recently read a book review of a biography of rock pioneer Sam Phillips, founder of Sun Records which was the first to record Elvis Presley. Although it sounds like an interesting book, I was most struck by reviewer Louis Menand's description of the early days of rock and roll and his grasp of the music's appeal:  "Rock and roll feels uninhibited, spontaneous, and fun. There's no show-biz fakery coming between you and the music." What he says about the early days still strikes me as essentially true even though beginning in the sixties there became exceptions: "Rock and roll did not have a message, unless it was: 'Let's party (and if you can't find a partner, use a wooden chair)'."

That concert certainly was uninhabited fun, and it's power has stayed with me even two days later. Although death has taken some of the group's founders and some current members have troubling medical conditions, Little Feat remains a great live band.
Posted by DJones at 5:33 PM No comments:

Art in the afternoon, baseball in the evening

Yesterday, Pam dropped me off to take the Metro to Dupont Circle to join my art history class at the Phillips Collection which featured an exhibit by the American impressionist painter William Merritt Chase. Not surprisingly, the painting which most attracted my attention was titled "The Lone Fisherman". 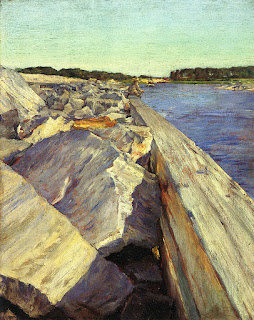 For a painter classified as an impressionist, many of Chase's works show sharp detail in spots, such as the rocks in the foreground here. In the distance the single human appears small and isolated. I noticed that Chase's outdoor scenes invariably contained man-made items such as the breakwater jetty which dominates this picture.

After leaving the art museum, I got back on the Metro to travel to Nationals' Park to meet my neighbor Jim for a baseball game. 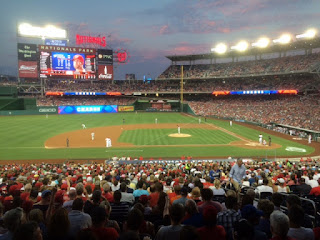 Harper homered in the bottom of the eighth to give the Nats a 3-0 win over the Phillies. Although very hot, it was a good day and certainly a full day.
Posted by DJones at 10:13 AM No comments:

Algae on the pond 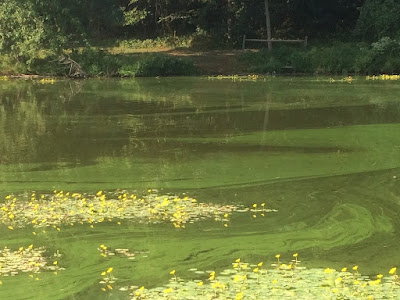 The modest waves of the pond cause the surface algae to form patterns.
Posted by DJones at 11:12 AM No comments: 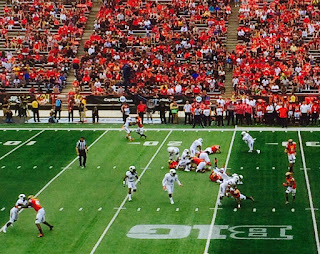 At the second half kick-off, Maryland was already ahead 35-0. Tropical storm was heading up the coast to the East, but other than a stiff breeze we were unaffected. 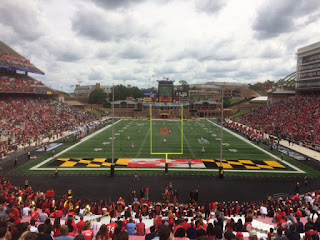 Posted by DJones at 5:44 PM No comments: