Diving ducks in the park

As far as waterfowl, the pond has Canada Geese pretty much year round and Mallards often. It always gets our interest when we have a lone visitor of another species. Over the past month, one such visitor we have tentatively identified as a Lesser Scaup. We have watched her many times but have been disappointed with our photo attempts. This is the best of the group: 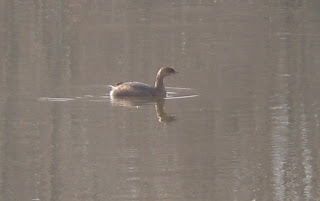 Today, I spotted another diving duck, and this appears to be a Ring-necked Duck, a type which has visited the pond before in late winter and spring. 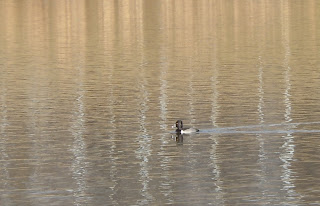 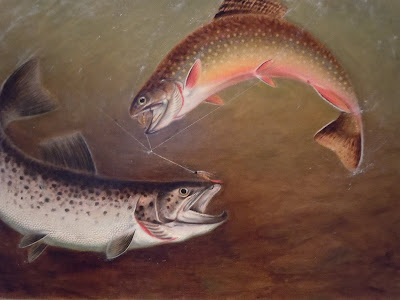 The image above is from a painting that is part of an exhibit titled "Afield in America: 400 Years of Animal and Sporting Art" at the National Sporting Library and Museum which we visited yesterday. Hunters, fishermen, horses, and dogs are the dominant subjects.

Pam views one of the paintings: 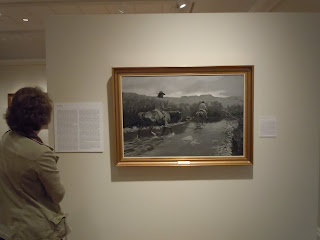 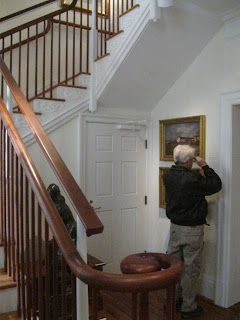 Being old, I needed reading glasses for much of the text: 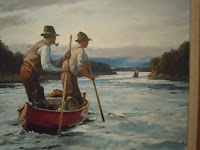 Of course, I spent most of the time with the fishing paintings. 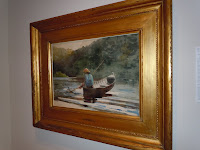 This Winslow Homer, "A Boy Fishing", is one of my favorites.


A close-up of a fly fisherman from one of the other paintings: 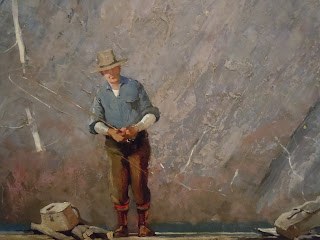 This is the angling section of the library. I have many of these books. 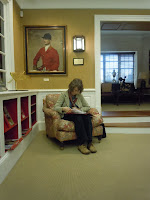 Pam settles down with a British magazine on fox hunting.
Posted by DJones at 10:46 AM No comments: 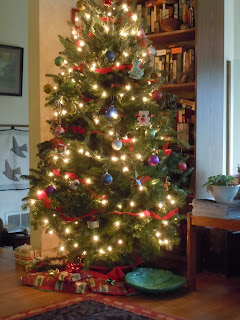 It may be my favorite thing about the holiday. 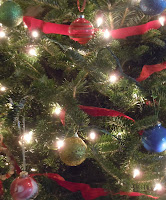 I like the whole process- picking it out, setting it up, putting the lights on first, then the ribbons, then everything else.
Posted by DJones at 3:31 PM No comments:

"The essential American soul is hard, isolate, stoic, and a killer."

Continuing to ponder about the course I recently finished, I realized that of the three components of the title I had been concentrating most on power and ritual and decided to review my lecture notes with a concentration on the third element, society.

The baseline for the course had been established by Aristotle who said that man is a political animal and that only a beast or a god would live outside the polis or political society. Hundreds of years later the Roman thinker Seneca disagreed, but most important writers on this subject such as St. Thomas Aquinas followed Aristotle for the next millennium. In the late middle ages and early modern period, the political society was seen as an organism likened to the human body with the king as head, the military the arms, and the peasants the feet. Finally, Jean-Jacques Rousseau in the 18th century wrote that humans were born both solitary and free, and the theory of individualism appeared for the first time in Western political thought.

Shortly after Rousseau's theories were written, the United States was created, and I wondered if Americans embraced the concept of individualism more than other peoples. The phrase "rugged American individualism" may have been first uttered by Herbert Hoover, but the concept had been around for a long time. This wondering brought to mind the quote that serves as the title for this entry, a quote which I have read many times but have forgot its origins. When I looked it up I felt I had come full circle back to the college course because the sentence comes from D.H. Lawrence although not from the novel that was one of the course requirements.

I'll now have to think whether we Americans are as individuals unusually isolated and if so what effect this alienation from each other has on our politics.
Posted by DJones at 2:59 PM No comments:

That was the name of the course I just finished at the University of Maryland. The course followed the topic of political power and ritual through both theory and historical events in a generally chronological sequence beginning with Aristotle. Although classified both as a history and a religious studies course, none of the six required books were written by historians or theologians, and two were fiction, a play by Spanish author Lope de Vega, and a novel by D.H. Lawrence. In addition, there were about a dozen articles and book excerpts, some from historians and one from a theologian, St. Thomas Aquinas.

Lectures and discussion groups examined such topics as whether human nature was essentially good and rational (Aristotle, St. Thomas, and Jean-Jacques Rousseau thought yes while St. Augustine and Machiavelli thought no), whether humans are social and political by nature (Aristotle said yes, and Rousseau said no), whether economics was the driving force of history (as Karl Marx believed), and whether public ritual and ceremony, which had been so crucial to political power in the middle ages and early modern period in Europe, were still important in a modern industrial society with its emphasis on science and rationality.

The final readings were from the 20th century's Michel Foucault, and the lectures elaborated on his studies of the history of punishment, the change from public physical brutality as "a spectacular and discontinuous intervention of power" to the modern state's invisible, discrete surveillance as "an automatic functioning of power." An original and controversial thinker, Foucault presented Jeremy Bentham's 19th century design for a modern prison, the panopticon, which Foucault came to regard as a metaphor for modern society.

I'll have to think some more about these subjects.
Posted by DJones at 1:47 PM No comments: