Nice wildflower meadow in the park 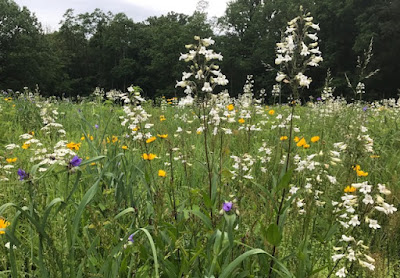 We began with a visit to the September 11 Memorial in lower Manhattan on Friday, and here I am with daughter Rebecca:

The World Trade Transportation Hub, the Oculus, is a striking and controversial design which serves as a shopping mall as well as a train station. I liked it and so did Rebecca who said the light and openness contrasts with most of the city. 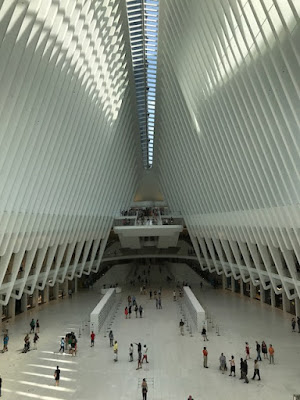 In addition to seeing Rebecca and Son-in-Law Sean, the Georgia O'Keefe exhibit at the Brooklyn Museum was the highlight of the trip. Her painting of the New York skyline seems appropriate to include: 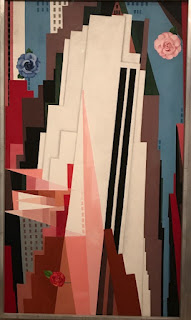 As well as a painter and feminist icon, O'Keefe was a popular model for photographers throughout her life. Here she playfully peers through a piece of cheese while sitting in a car. 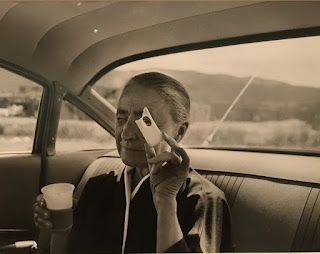 The Dinner Party was a related exhibit honoring the feminine throughout pre and recorded history with each place-setting symbolizing something different, and the final setting is for Georgia O'Keefe as a symbol of women's creative expression. I failed to record the symbolism of this place-setting. I just liked the look. 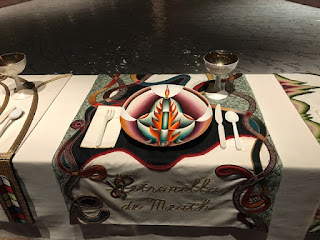 Pam, Rebecca, Sean, and I walked to the nearby Brooklyn Botanical Gardens after leaving the museum. Here's the young couple: 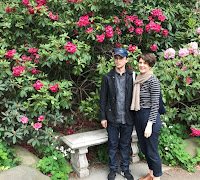 Sunday morning I was attracted to the sunlight in the courtyard as viewed through the window screen of the Air B&B apartment we rented: 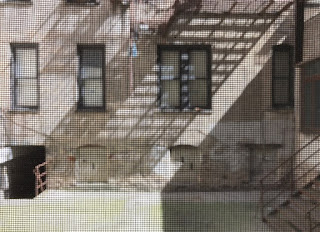 Before the trip I checked my notes on skyscrapers from the architectural history course I took a few semesters ago, and two items that I wanted to see were the lobbies of the Woolworth and Chrysler buildings. Neither were available for a thorough visit, but we were able to briefly get into both. In the Chrysler Building on Sunday, I was able to take a photo or two, and this one gives a sense of the appeal of these lobbies: 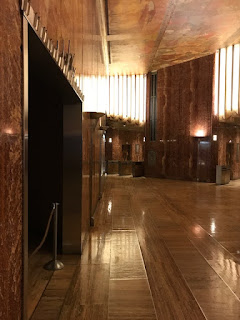 Tuesday night I went to the American Film Institute theater in Silver Spring to see a screening of the 1987 movie based on attempts to unionize coal miners in West Virginia in 1920. I've long admired John Sayles who wrote the screenplay and directed the movie. His novel Union City I read and own, and he's also an actor who appears in small roles in some of his films. 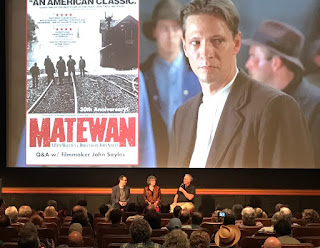 Sayles is on the right of the three figures in front of the screen in the above picture. He generously answered questions from the audience after the movie was over. On screen is the actor Chris Cooper who was little-known at the time. David Strathairn also appeared, but James Earl Jones was probably the biggest name in the cast.
Posted by DJones at 11:59 AM 1 comment:

My walks on Friday and Saturday 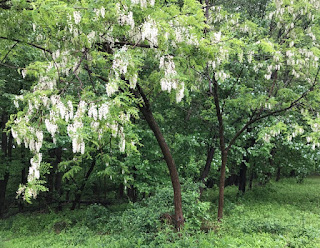 The individuality of trees is more obvious in the spring and autumn than winter with the absence of leaves and summer when the trees in the woods dissolve into a single green mass. Pam's experience in bee-keeping made me aware of the importance of the black locust trees for the mid-Atlantic area because the honey bees rely on them for early season nectar. I also like the looks of the black locust spring blooms, and decided to photograph one of these trees Friday. 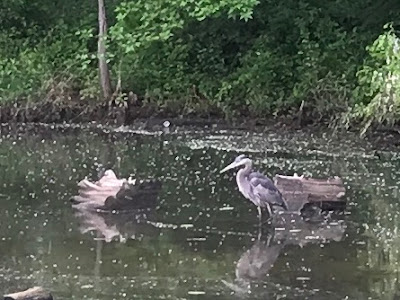 Great-blue herons are frequent visitors to the pond. Most of them don't like people getting too close, so I tried to be careful today when I took this picture.
Posted by DJones at 12:40 PM 1 comment:

The Peace and Friendship Garden at the University of Maryland 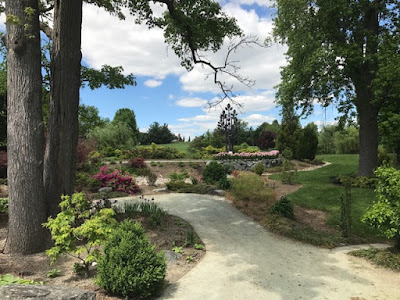 Still my favorite on a campus with many nice gardens.
Posted by DJones at 2:49 PM No comments:

Either I left them at the parking lot at the Daniels section of the Patapsco last October or they're somewhere here in the house. Both possibilities seem unlikely since I've searched the house and my habit is to throw the boots in the trunk when I remove my waders at the end of the fishing trip. I can't think of any other scenario.

Fortunately, I had a cheap pair that barely showed any use, and they proved serviceable for my trip on Tuesday. Coincidentally, I went to the same place on the Patapsco that I did at the end of last season when I last used the missing boots. No trout although the section was supposedly recently stocked, but the bluegills were willing. A nice spring day although windy. Water level at Hollofield was 1.65.
Posted by DJones at 2:44 PM No comments: 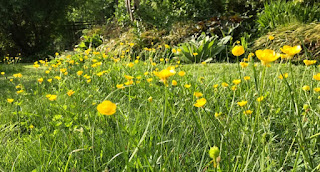 Buttercups are all over the lawn, front and back. While their presence is an indication that our lawn is not a perfect, uniform spread of grass, I prefer the interest and beauty of imperfections like these. 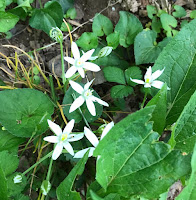 It's also a good year for Star-of -Bethlehem.
When mowing I instinctively refrained from cutting down a group of weedy-looking plants behind the swing and was later rewarded by the blooms of this plant which Pam thought was called fleabane: 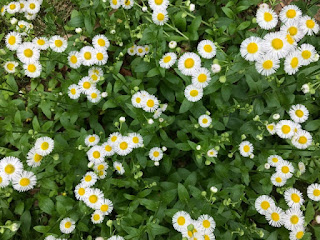 I now know that the proper name for fleabane is erigeron. 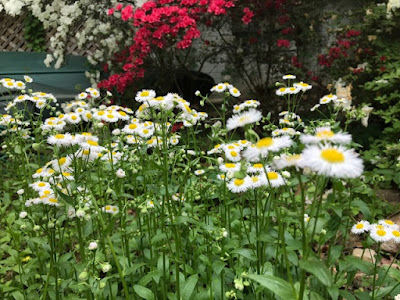