On the Upper Potomac finally

With a clean bill of health, yesterday I made my first trip this season to kayak, wade, and fish my favorite waters.  Water levels have been high this summer, but I looked back through my fishing records and determined that this area of the river would be ok for wading.

Weather was beautiful, and the fishing was fair:  two smallies and about a half dozen bream, all caught on a B & B fly.  One of the smallmouths was quite small, and even the larger was far from a trophy but fought well and jumped.

Below is the much photographed aqueduct at the Mouth of the Monocacy. 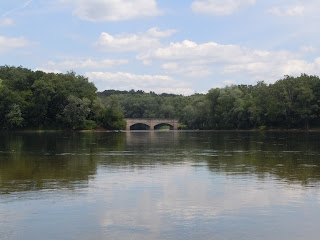 A few words on health

Last week my knee had tentatively been diagnosed as having a torn meniscus, but I learned today that the M.R.I. showed no tear.  There had been about three days of pain that caused me to make the doctor's appointment, and I treated the discomfort with Ibuprofen.  The pain then lessened and I no longer had to use a cane to walk.

For those few days I wasn't pleasant to be around which seems to be typical on my part when I'm having health problems.  I don't like not being able to do the things I like.  I'm in good health but I should work on preparing to accept the physical limitations that generally come with aging.  I'm not certain on how to be more positive about this aspect of old age.
Posted by DJones at 10:20 PM No comments:

Although this poster describes it as a sound movie, the version we saw tonight at the AFI was actually silent.  A musical accompaniment was provided by a live chamber orchestra which added to the uniqueness of the screening.  The Silver Theater in Silver Spring was built in 1938, so it's unlikely this version was ever shown there before.  Still, watching gave me the definite sense that I was seeing a classic silent movie in an environment much like movie-goers experienced it when it was released in 1929.

An Over-due Tribute to Back-up Singers

Saw the documentary "20 Feet from Stardom" last weekend, and it was the best movie I've seen in years.  Audience members emerge from the theater with smiles on their faces because the film lifts your spirits and makes the world look a little brighter.  It made me think how much influence the back-up singers, usually African-American women, have had on music I've listened to all my life.
Posted by DJones at 9:45 PM No comments:

In the 1950's the first neighborhood I grew up in was populated by young families most of whom moved to the DC suburbs from small towns in rural areas.  They retained many of the habits from their backgrounds including relying on Sears and Montgomery Wards catalogs for many purchases.

Browsing through these catalogs was a wonder for a small boy.  I remember microscopes, telescopes, musical instruments, fishing rods, guns, and various toys.  Ladies' underwear was of interest but not to extent it would be when I was older.  However of all items, I was positively obsessed with the baseball gloves offered for sale.  I can still picture the two page spread of the various models each bearing the autograph of a major league player.

A baseball glove may not have been the first item purchased for me, but it was far and away the most important in my world.  I was no doubt given certain parameters concerning price, and I would have devoted hours in making my final selection.  Soon after my mother called in the order, I questioned her and realized to my horror that she purchased a glove intended for left-handers.  She made the mistake because the description stated it was to be worn on the right hand which she concluded would be correct for a right-hander like me.  I had to explain to her that since I threw with my right hand the proper glove would be on my left hand.  She answered that she always thought you catch with both hands and performed her version of the motion which was, of course, beside the point and probably angered me because my emotions would have been on edge enough as it was.  A nightmarish vision was coming into my boy-brain of having to take off the glove to throw the ball after each catch.

Naturally, the correction was made, and I eventually received the correct glove, but the delay must have been excruciating at age 8 or 9.  I think a number of mothers must have made the same error because the next year the wording in the catalog was expanded to specifically describe that a certain glove was for right-handers to wear on the left hand.
Posted by DJones at 1:33 PM No comments:

Concert at the Franciscan Monastery

Last night we attended a concert performance by a children's choir from Lucerne, Switzerland.  The program included works by Brahms and Bach as well as what sounded like an African-American spiritual which was not on the printed program and a Swiss folk song which was the only secular piece.  The sound was beautiful.

I blogged about going to the monastery on July 2, 2011, and beginning shortly after that first visit Pam has been volunteering at the office once a week. 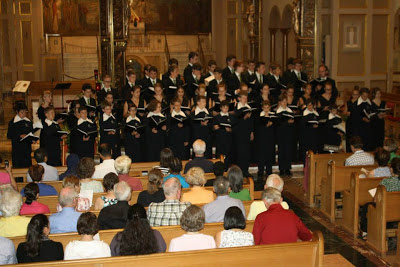 Posted by DJones at 9:44 AM No comments:

Weekly walk to a farmer's market

A problem of where we live in the suburbs is that walking to stores is not very practical.  There are shopping areas a of couple miles from the house, but the walk is largely unpleasant along well traveled,  pedestrian unfriendly roads which would be especially troublesome carrying grocery bags on the return trip.

However, this summer a Saturday farmer's market has established itself in the parking lot of a middle school about a mile away, and I'm making a weekly morning walk there.  The trip is almost entirely along our street, and on my first trip I realized that I may have walked this route only once before in the 27 years we've lived here.  It's a pleasant neighborhood, and I've found that I enjoy looking at the homes and yards.

There are only about a half dozen vendors at this market, but the meats and produce I've bought have been good.  I walk home through the park rather than back through the residential neighborhood for a change of scenery.
Posted by DJones at 1:58 PM No comments:

Last semester I took a class in this subject that was offered within the philosophy department.  It was entitled "Spooky Action at a Distance," which comes from a quote by  Albert Einstein who wasn't completely comfortable with quantum physics but could not deny its validity.

This summer I'm doing some additional reading on the subject, and maybe I'll sometime be able to articulate a coherent thought about it.

Meanwhile, I ran across this video that incorporates some of the concepts.  Not a bad song either.

Posted by DJones at 7:25 PM No comments:

Fishing in a summer drizzle...

...is pleasant enough.  Since I was just at the pond I could have walked home had the drizzle become a downpour or an electrical storm.

Fishing's been a little tough at the pond which is why I sought out alternatives last week.  I did mange one bluegill today, and I had to work for it.
Posted by DJones at 4:25 PM No comments: