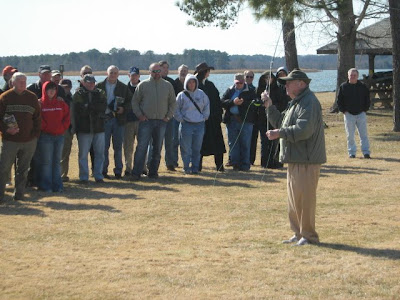 Bernard "Lefty" Kreh is, at 85, possibly the best known fly fisherman in the world. He was born in Frederick County, Maryland and has spent virtually his whole life in this state except for serving in the army during WWII when he fought in The Battle of the Bulge.

Because Lefty is local, I've been lucky to have met and talked with him a number of times usually at events like today at the fly fishing gathering that has come to be known as Tiefest on Kent Island. The event's name is a reference to fly tying which takes center stage, but there are also fly casting demonstrations and lessons such as Lefty is shown giving above. He's probably done this thousands of times, and he's probably given the same answer thousands of times to the question I asked him about knots, the subject of a couple of the many books he's authored. Still, he managed to answer with patience and humor, as he always does.
Posted by DJones at 4:19 PM No comments: 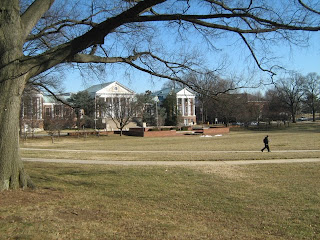 Every Tuesday and Thursday I find myself in the same lecture hall that I was in 45 years ago. Back then, it was a Botany course, and now it is "History of Science and Technology in Western Civilization." On those days I also have an earlier class in "Film in American Culture."

The deal at The University of Maryland is that a retired person over 60 may taken up to 9 credits with minimum tuition plus books and parking. I have chosen to audit rather than taking the courses for credit, so I won't be writing papers or taking exams.

Without the pressures I had as an undergrad, it's pure learning and it's great.
Posted by DJones at 2:28 PM 1 comment: