I just finished reading his memoir, Born Standing Up- A Comic's Life, and I liked it a lot. It's only funny in few places because he's basically a serious man who's lived a not very happy life. That Steve Martin is not the wild and crazy guy we first encountered in the 1970's is generally well known, so if the book is not very funny nor does it contain many surprises, what, you may ask, is the appeal?

It's an honest book, for one thing. Martin came from what is now called a dis-functional family with a cold and distant father, but there is no "poor, poor, pitiful me" in his writing. Martin believes the lack of paternal approval probably contributed to his drive to succeed in show business despite many unsuccessful early years.

He also doesn't bemoan the sacrifice of privacy that fame brings and quotes an observation that celebrities want fame when it's useful and don't when it's not. He feels he's reached a happy medium on this subject: "At first I was not famous enough, then I was too famous, now I am famous just right." He devotes more space to his early girl friends than his later relationships and marriages. As well as being basically a private person, he may legitimately feel the earlier romantic couplings are easier to understand and put in perspective.

His devotes attention to his first film, The Jerk, and says he immediately loved the social aspect of movie making in contrast to the lonely process of being a stand-up comedian. He praises the director, Carl Reiner, who he says taught him more about being a social person than any other person in his life. He doesn't say much about his subsequent movies. Personally, I like the earlier ones like Dead Men Don't Wear Plaid and Pennies from Heaven and L.A. Story but have found his more recent movies to be mediocre. I suspect he had a lot of creative input to the earlier ones but since then has been a hired actor. He also doesn't discuss his growing career as a writer except to note that it was his play Picasso at the Lapin Agile that finally won him praise from his father. I went back and reread the introduction, and he does make it clear that the book's focus is on his career as a comedian. That accounts for the omissions about his later life, I guess. 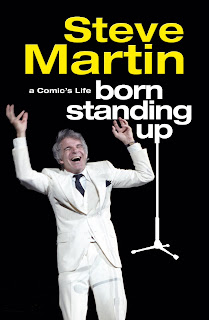 One reason I like memoirs is that they are generally written by someone who has achieved some success who looks back on his life and presents what he feels is significant. With Steve Martin's, it may be notable what he chooses to leave out. I have heard that performers should leave the audience wishing for more, and with his economy of words and understated style, Martin achieves this with his memoir, at least for me.
Posted by DJones at 2:03 PM No comments:

I keep seeing a commercial, for Cialis I think, where a couple seems to bump into each other while doing yard work. They lock eyes and get immediately hot.

Ok so far, but then it gets surreal. Their house goes through a metamorphosis into a tent and the picket fence into a boardwalk leading to the woods. A campfire appears. The final shot is the same in all these commercials: The man and woman are outdoors in separate bathtubs.

I don't get it. Outdoor sex is great, but what's with the separate bathtubs? Yeah, the purpose of the product is to put lead in your pencil, but how does a house turning into a tent symbolize getting it on? And those outdoor bathtubs-who the hell sits in a tub outside?
Posted by DJones at 10:13 AM No comments:

Have felt the need to catch trout and three recent trips to the Middle Patuxent yielded none. Oh, I caught fish alright, bass, bluegill, fallfish, chubs, but no trout.

So today I headed north on Route 97 across the main branch of the Patuxent up through Howard County and across the Patapsco into Carroll County. When I got to the stream crossing on Klee Mill Road I noticed a surprisingly large number of cars in the parking lot, but my only concern was that my special pool, which I've christened "old reliable", would be occupied by another fisherman. No problem. It's too long a walk for most, and I after the first hundred yards walking along the stream I didn't see anyone.

As I threaded the four weight line into the rod I noticed two important things. The first was an annoying number of bugs crawling up my body onto the back of my neck. The second was rising fish. The two thing together added up to good news: There was a hatch of little black stone flies.

I sometimes think that given how long I've been doing it I should be a better trout fisherman, but I have learned a few things over the years. I know how to recognize this hatch and how to catch fish during it, so I tied on the appropriate floating fly and started casting. The action wasn't frantic but it was steady and included a handsome brown trout about sixteen inches. If we have another bad winter that fish will stay in my memory and help me through it.
Posted by DJones at 5:48 PM No comments: 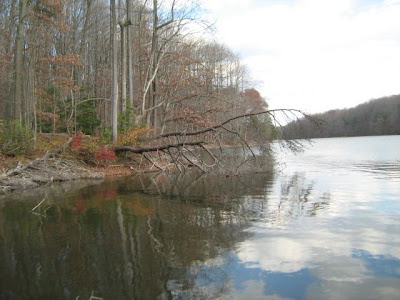 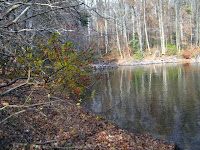 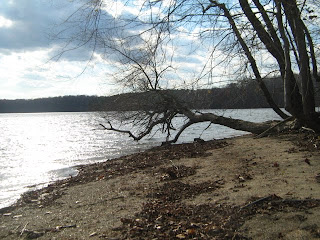 Big Fan. Saw two of the three basketball games that the Terps have played so far this year, and they won all three.

Big win for the football team yesterday at Virginia which makes them 7-3 with two left. Will be there for the season's final game against NC State.
Posted by DJones at 5:33 PM No comments: 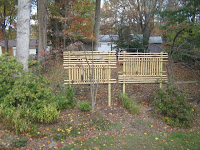 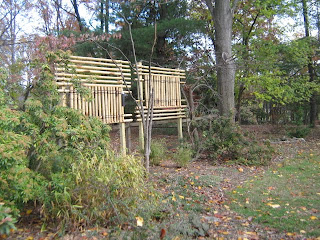 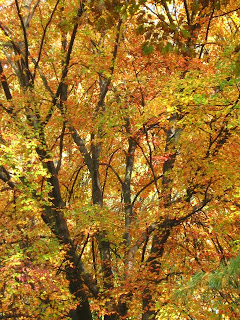 her Fall picture taken about a week ago.
Posted by DJones at 4:39 PM No comments: