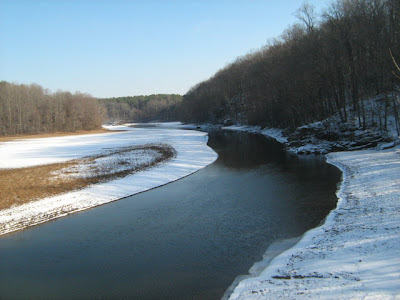 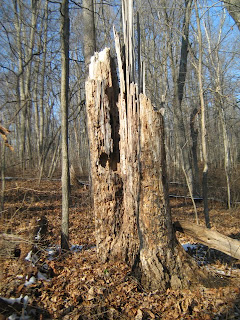 Rocky Gorge is a twin reservoir to Triadelphia where I went kayaking a month ago. Today I walked along its upper reaches in the Brown Bridge area, and there it seems less a lake and more of a lazy river which it essentially is because like Triadelphia it's created by dam which impounds the upper Patuxent River.

Since the surrounding land is owned by the WSSC, the water utility, it is free of development and its forests constitutes one of the nearest wild areas. 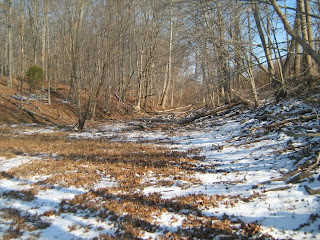 Posted by DJones at 7:23 PM No comments:

There might be one in my suburban neighborhood. My next door neighbor believes she saw one. She's an intelligent, level-headed woman, and I take very seriously anything she says. Still, she's not at all an experienced outdoors person, so I reserve judgment.

Twice in the past week on separate occasions my wife Pam and I got a glimpse of what was either a coyote or an unusually large fox. Foxes have been common around here, so we're used to seeing them. What I saw seemed bigger than the foxes we see, but I really didn't get a good enough look for a positive identification. Pam feels the same about what she saw.

A couple of years ago in the parkland across the street I got into a conversation with a woman who said she saw a coyote in the park. Based on other things said, she seemed to be fairly knowledgeable about the outdoors and the the critters that live there. The park is partly developed with ball fields and tennis courts but is also partly wild. Also, it adjoins another park which extends quite a ways along Paint Branch Creek and joins other parks cumulatively creating a wildlife highway through the suburbs.

There have been sightings of coyotes, I believe, in all Maryland counties, so it is more than possible I have them nearby. I'd like to know for sure. While I'm not much of a tracker, I've been studying up in hopes I can learn to differentiate among dog, coyote, and fox tracks. This snow might help but it's melting today. I think I'd better go out now and take a walk to look around.
Posted by DJones at 4:06 PM No comments:

A few years ago I read an interesting piece that argued that seeing a movie based on a book that you love is a mistake. The visual experience of cinema is so strong that it will forever replace the images lodged in your head from the book. While I basically agree, putting this into practice is difficult for me because I love both books and movies and generally succumb to the temptation to see a beloved novel on screen.

The novel A River Runs Through It is a good example. It's one of my favorite books not just because of the fly fishing but because at its core it's about family and the pain of an older brother to a troubled sibling and the impotent feeling of being unable to help. I too have known that pain. Author Norman MacLean wrote, "... I knew there were others like me who had brothers they did not understand but wanted to help. We are probably those referred to as our brothers' keepers, possessed of one of the oldest and possibly one of the most futile and certainly one of the most haunting of instincts. It will not let us go." Reading those words gave me some comfort and understanding of one of the major events of my life- the early death of my younger brother Tom.

I enjoyed watching the movie made from A River Runs Through It when it first appeared nearly 20 years ago and watch it repeatedly when it shows up on TV, but a price I have paid is that the actors and scenes from the movie force their way into my thoughts when I try to recollect the pleasures of the original written words.

The subject of books and the power of movies came to mind because I recently read the sequel to Scott Turow's bestseller from 1987, Presumed Innocent. I found both novels entertaining but neither will be significant books in my life. When reading Innocent, the more recent, I came to the reintroduction of the character Sandy Stern from the first book, and my first reaction was, "How can this be? Sandy Stern died." Then I realized: No, the fictional Sandy Stern didn't die. The actor, Raul Julia who played the character in the movie based on the first book died.

Those powerful movie images can be overwhelming. They get into your soul. Maybe that's why the Amish don't like their pictures to be taken.
Posted by DJones at 11:19 AM No comments: 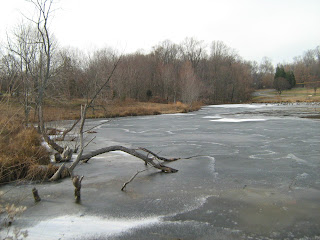 Well over a hundred Canada Geese are visiting. These are definitely wilder birds than the semi-permanent ones we're used to seeing. They keep their distance from humans. There are a few gulls on the ice as well.

Posted by DJones at 2:08 PM No comments:

The novel is named for a county in southside Virginia that is best known for closing its public schools from 1959 to 1964 in opposition to racial integration. Most of author Dennis McFarland’s book takes place in August, 1959 just prior to the public school closing and the establishment of a private school for the white students. Although the main characters are fictional, some of the minor characters were real and the place names, such as the town of Farmville, are also real.

The main character, Ben, is a 10 year old boy, and most of the action is told in the first person by him. At times, however, the point of view switches to Ben’s adult voice that fills in the history of what is transpiring round the boy and what is the outcome. The pace of the action is slow, very much in tune of the pace of a hot southern summer at that time.

The closing of the Prince Edward County schools was well covered in the news, and I was 12 at the time and remember it well. In addition, I have visited the county a few times, the first visit taking place in 1966 just two years after the schools reopened. I was there with a friend who had decided to follow his family tradition of attending Hampden Sidney College which is located in the county near where the main character’s family, the Romes, had their fictional farm. My second trip was during his freshman year when I drove down from Maryland for a party. During these trips I met a young couple who were known to my friend because the husband had been a friend of my friend’s older brother while they were students at Hampden Sidney. The young husband was a lawyer in Farmville and killed himself a few years later, I believe. It’s possible that he played a role in the legal matters surrounding the school closing, but I don’t know.

The novel’s main character’s family has little resemblance to the TV stereotype of the 1950’s such as Father Knows Best or on Ricky Nelson’s show. The Romes are chicken farmers, and the mother and father show little affection for each other or display any ability to communicate with their three children. The grandfather is a cruel self-centered man who lives in the big house nearby on the family property. Ben’s attachments are to his older brother and especially to his older sister and to his best friend, a black boy of Ben’s age whose family live as tenant farmers on the Rome family land.

The characters and the action of Prince Edward seem very real to me. Some of the events are unpleasant and may be classified by literary types as Southern Gothic or in the Faulkner mode. I wasn’t able to find out much about the author, Dennis McFarland except that he was born in the Deep South and, based on when he graduated from college, he would appear to be a few years younger than me. That would make him close to the age of his main character in 1959, and since I tend to believe that authors put some of themselves into their characters the vivid descriptions of rural and small town southern life are as he would have seen them at the time. I think I felt a foreshadowing of a future in literature for Ben when he responds to an older woman showing him an Emily Dickinson poem, one my favorites.

I'm going to look around for more of McFarland's books.

That's probably it for 2010 as I rarely get out fishing in December. It's possible if we have a warm spell, but I've already started to look ahead to the 2011 season and called Angler's in Annapolis about next year's licenses. I want to be legally ready to fish on January 1 because I remember about 10 years ago when New Year's Day was a mild day perfect for winter fishing, and no place was open to get a new license. Angler's doesn't have the new ones yet, so I'll check on line.

Along with looking ahead to 2011, I look back at 2010 with satisfaction. This past season began as they often do with late winter/early spring trout fishing. With April came the shad run up into the rivers like the Potomac, and although I got out and caught a few I'll plan to do it more often this coming year. As the weather warmed in later spring, I began concentrating on largemouth bass and bluegill which is fine, but I really should have taken more trout trips then as well. Summer for me means smallmouth bass, and there was good fishing on favorite waters and new waters as well.

One difference this year over past was the number of trips I took with other people. Two of the best were in late summer and early autumn on the Chesapeake for striped bass, or rockfish as we Marylanders call them. Two of these Bay trips were with professional guides as was the fall catfish tournament. The season ended as it began in pursuit of freshwater trout. Over the winter I'll remember about this year both the good company as well as the good fish.
Posted by DJones at 12:44 PM No comments: