Looking over the rolling landscape created at Brookside, I thought about an article I recently read about Capability Brown, 18th century British landscape architect. Throughout Britain, he created gardens that appeared natural but actually were thoroughly artificial, and his style influenced landscape architecture since. Prior to Brown, the wealthy landowners favored for their country estates formal gardens with geometrically straight lines, a style popular in France and Italy. Brown replaced these with pastoral fields, ponds, and woodlands. This style of landscaping is now common in the U.S. and can be seen in Central Park in New York City as well as most golf courses. 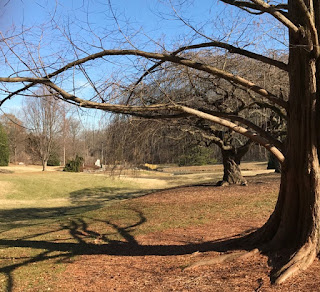 After walking around the park, I checked out the indoor exhibit where another visitor called by attention to the angel trumpet plants: 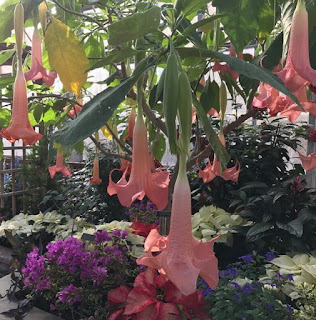 Posted by DJones at 3:25 PM No comments: 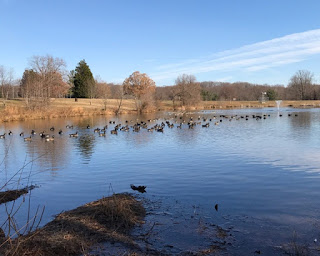 If anything, I think yesterday's estimate of 120-130 is conservative. Couldn't get an angle to get all of them in the picture.

Just over two years ago I wrote about my thoughts concerning a character in a Richard Ford novel and his concept of a "default self", that a person's identity is defined by what they do. This concept came back to me this semester in college during a philosophy course where among the readings was a selection from Jean-Paul Sartre's Being and Nothingness.

Ford's character's default self is very similar to Sartre's idea of "facticity", a person's essential nature. Sartre believed humans could transcend their essential nature by their own decisions about their actions. An example would be a shy person who chose to become a public speaker. Choices such as this give humans what Sartre calls "radical freedom." I suspect Ford was familiar with these ideas because he stresses that the default self is a person's own creation. His character's musings seem a slightly different slant on Sartre's concept of transcending facticity. I remember Sartre's plays, novels, and writings on existentialism as popular when I reached my early teens. I read a little Sartre, but I think I was too young to fully understand what he was saying. Being a little older, Ford may have gotten it better.

Both Sartre and Ford were looking at personal identity, a subject of interest to me especially when I look back to when I was younger. The philosophy instructor is a young man who recalled that when he first left home for college people advised him to "be yourself, Andrew", but he didn't know what they meant. I understand his confusion. Many young people resolve their questions of personal identity by joining a group which gives them an identity and sense of belonging. Jock, nerds, sorority girls are all groups which provide roles and identities. The large identity group when I was young were the hippies, although we more commonly referred to ourselves as freaks, and everyone else was the straight world. After college when I began working jobs which required wearing suits and ties I felt a clash with my established identity.

By the late 1970's, some college-educated people I knew began referring to themselves as professionals which seemed to have a broader definition than the traditional one of doctor or lawyer, and young, urban, professional became "yuppie". I suspected this group self identity served to set them apart from those who were not college-educated.

I never completely understood the "hipster" identity of my children's generation, but I believe it's some combination of hippie and yuppie although maybe I'm wrong about that. I'm often wrong or fail to completely understand things about young people now that I'm old.
Posted by DJones at 10:43 AM No comments:

Counted 120-130 the last two days, yesterday in the fields and today on the pond. It will be interesting to see how many remain after the winter.
Posted by DJones at 11:21 AM No comments:

Still icy in the afternoon 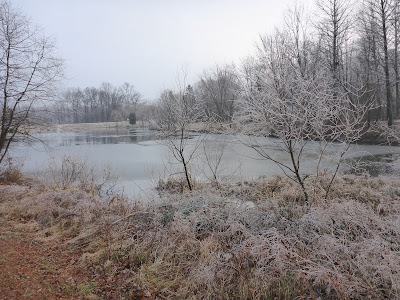 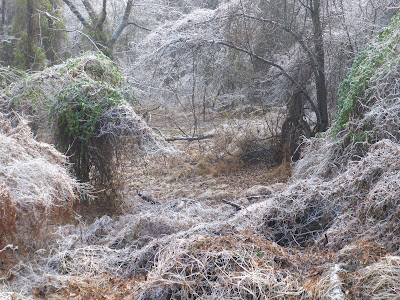 Out the front window: 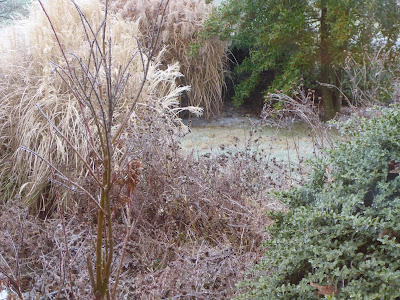 From the deck looking down: 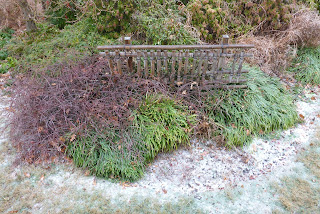 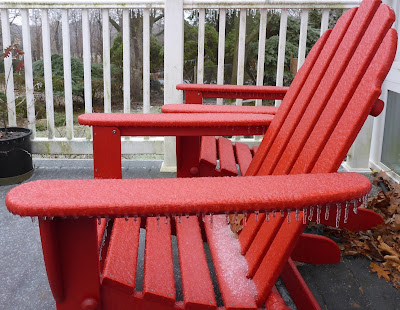 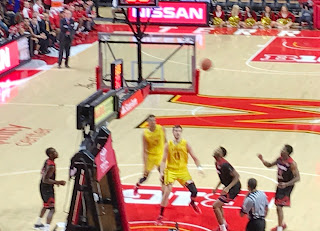 I think this is the third basketball game I've gone to this year, and Maryland has won them all. 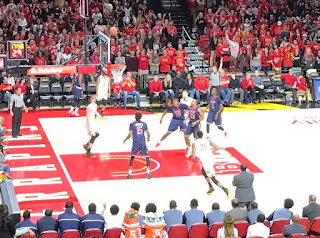 Posted by DJones at 3:12 PM No comments:

Walked around the Dupont Circle area while Pam was getting her hair done and thought this street was colorful: 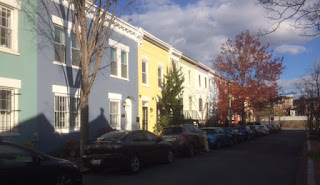 Posted by DJones at 7:30 PM No comments:

A course I took a few years ago entitled "Why Poetry Matters" made me think about how much poetry surrounds us in the way of song lyrics. Most of it is bad poetry, I would admit, but it's poetry nevertheless. In addition to song lyrics, we are bombarded with words constantly from radio and TV in addition to from people in our work and personal lives. Regarding written communication, the internet has added a huge amount on top of traditional newspapers, magazines, and books.

In a similar fashion, the art history course I'm currently taking makes me muse about how many images modern humans see daily. Movies, television, publications and, once again, the internet give our eyes a constant stream of images. With a few keyboard strokes, people can view images of the paintings of the great masters that once were available only to the select few owners and their friends.

I have read that it's been estimated that about 80 billion humans have lived on earth. That estimate depends on, among other factors, the length of time Homo Sapiens have existed, but I believe the current generally accepted figure is 250,000 years. What is certain is that for most of those years the amount of words and images available to humans was infinitely smaller than what it is today. The images drawn on the walls of caves in Lascaux 17,000 years ago and in Chauvet 30,000 years ago must have been regarded as precious to those who saw them. The number of animals in the Lascaux paintings have been speculated to represent either past hunting experiences or rituals to bring about the success of future hunts. Words were scarce as well since it's been just a few thousand years that they have been stored in writing. Oral story-telling was valued, and I envision extended families huddling around a fire at night listening to a practiced speaker recounting old tales of valor. This is how the Homeric epics were handed down.

So now we're comparatively wealthy in words and images, but maybe that abundance has cheapened the product. Here, I'm thinking of the internet again. Anyone with a computer can throw words out there, and a great deal of that content is simply false while much of the rest is cruel, crude or both. (I'm not oblivious that I'm adding to the total.) Images flood us as well, both still and motion, but the value of certain iconic images gets diminished in that flood. A few weeks ago in the art history class, we were analyzing Di Vinci's "Mona Lisa", and I realized the masterpiece has been reproduced and parodied so often in my lifetime that studying it as a painting was difficult for me.

Being provided with so many words and images makes us not spend time on any one of them. Often I hear complaints that people don't fully read e-mails and miss important points. The average museum visitor spends about 17 seconds on each work of art they view. We feel we have to hurry through all these words and images, so we have trouble adjusting to the ones that deserve plenty of time. The professor of the poetry class recommended letting a poem "flow over you" without getting too hung up on trying to figure out the meaning of each line and then going back for analysis. The art history professor had us study an established six step process: look, observe, see, describe, analyze, and interpret, with each of those steps explained.

Maybe the rule should be to devote the time to taking in an image or a written or oral statement as appropriate to how much time was expended in the creation.

Posted by DJones at 5:26 PM No comments: