The Potomac, the Monocacy, and Thomas Wolfe

I read Look Homeward Angel and the other novels of Thomas Wolfe about half a century ago. An English professor in college said to read Wolfe while you're young because otherwise you won't, and I think that's true. It was in Of Time and the River, I believe, that Wolfe wrote a lyrical passage about how pleasant the native names of American rivers sound when spoken. I thought about that passage today when I fished these two rivers.

Fishing results were mixed because although I only caught two, one of them was the best bass I've caught this year, a fat 16 inch smallmouth. The fly was a B Damsel created by Joe Bruce of Baltimore. No sign of grasses. Water levels were 1. 09 at Point of Rocks, 2.77 at Little Falls, and 2.21 at Bridgeport on the Monocacy. 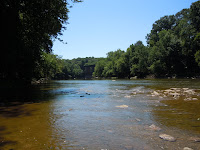 The Monocacy, looking downstream near the confluence with the Potomac.

Posted by DJones at 4:00 PM No comments:

The old section of town is frequently described as picturesque with its quaint old buildings, and I remember taking both black and white and color photographs there when I was into photography in the 1960's and 70's. Ironically, on my first visit to the town in years yesterday I forgot to bring a camera. Even if I had remembered, I might not have taken any pictures because I came there primarily to scout fishing locations along the Patapsco River.

In addition to finding new places for future trips. I got in an hour or so of actual fishing and caught a nice little smallmouth bass as well as numerous bluegills, all on a B & B fly. The trip back was highlighted by a violent thunderstorm which decreased in severity as I drove south to home.
Posted by DJones at 2:19 PM No comments: 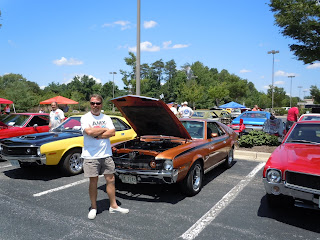 Although I'm not a car hobbyist I attended a show in Edgewater, Maryland yesterday because my friend, Pat, was displaying some of his cars, one of which is pictured with him above. The show specialized in Nash Ramblers and other cars made by American Motors Corporation so I learned a lot about this collecting niche. Basically for me it was a good opportunity to sit outside on a nice day, drink beer, and talk cars, fishing, and any other subject that might arise.

This one belongs to Pat's father and is one of only about 12 1957 Rebels in existance: 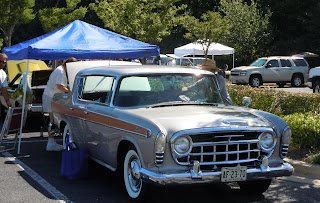 Caught in the rain on the Patapsco

I seldom take rain gear when I fish in hot weather because feeling the rain on my body is cooling and refreshing. I don't want to be caught outside during a thunderstorm, however, so I began the 40 minute paddle back to the car soon after the rain started. I didn't mind ending the trip because I had been out for 5-6 hours and caught many panfish and a few bass. Thunder sounded distant while I was on the water but both it and the rain picked up strength on the drive home.

Most effective fly was a red and pink bead head marabou streamer. I have no idea what made me tie that color combination. Water level was 1.44 at Hollofield. 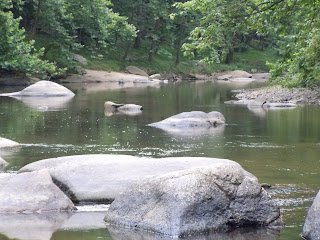 Posted by DJones at 5:15 PM No comments:

The Book of Job and Recent Movies

Two days ago I saw The Tree of Life, and it's still in my head. The movie's quote from the Book of Job in the Old Testament made me think of another movie from just a few years ago, A Serious Man, that I also associate with that biblical book. I did some prowling around the internet to refresh my memory of A Serious Man and noted that, although critics often referred to the central character as a modern day Job, the Coen Brothers deny they were consciously referencing that story.

The story of Job is of a righteous man who is subjected to great suffering. This mystery of why bad things happening to good people is a question that has perplexed religious thinkers for hundreds of years, and that theme is an important element of The Tree of Life but not the only one. The movie examines the harshness of nature in contrast to spiritual grace and also the inter-relationship of all living things. In its own way, it may be the most religious movie I've ever seen.

Last night I napped in front of the TV which at the time happened to be showing The Da Vinci Code, a much inferior movie than the other two, and at one point I awoke to see a biblical verse shown on screen. The verse was Job 38:11. Apparently, movie makers of recent years are obsessed with that book over all the others in the Bible.
Posted by DJones at 9:59 PM No comments:

Didn't get out until mid-day to the Daniels area. Many, many bluegill but no bass. Grasses coming in throughout the slack water above the dam which makes it look less barren. Lots of minnows too. Water level 1.45 at Holofield.
Posted by DJones at 8:47 PM No comments: 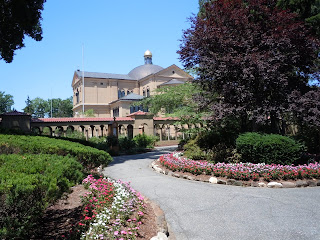 About a month ago, Pam was introduced to the gardens at the Franciscan Monastery In Washington, DC by Susan, a friend who is well known in area gardening circles. Yesterday, we glanced briefly at an internet map, and Pam and I set out to visit there.

Now, Pam and I are lifelong DC area residents, and Pam was actually born in the District. Nevertheless, we had trouble finding the Monastery although it covers considerable ground in Northeast. From our general notion of the location, we blundered into an area of sufficient proximity that the view started to look familiar to her and we finally found it.

The gardens and buildings are beautiful. I'm only posting the one picture because my photos don't do it justice. There are bee hives on a section of the grounds not open to the public, and Pam has contacted them about volunteering there although we are not Roman Catholics.

Like any tourists, upon leaving we made a wrong turn and got turned around again. When we corrected our course, we drove back into Maryland on Michigan Avenue which took us through the Queens Chapel area of Prince Georges County. It wasn't an efficient route to our home in Silver Spring, but the drive did revive memories of that neighborhood for both of us.
Posted by DJones at 9:58 AM 2 comments: 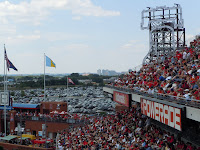 Friends Bill and Stan picked me up yesterday morning, and we drove to Philadelphia to watch the Phillies play the Red Sox. Bill is a Red Sox fan and Stan a Phillies fan, and I'm just a baseball fan.


David Ortiz (Big Papi) at bat for the Sox. 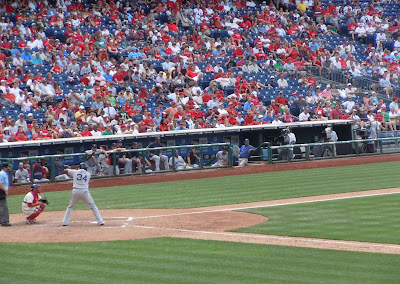 On the way home, we stopped in Baltimore for the Orioles/Cardinals evening game. 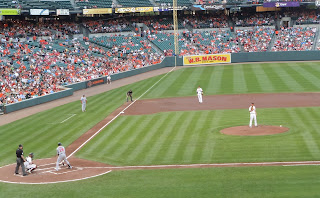