And I'm not certain why I had either of those two feelings Friday evening and much of the day Saturday.

The physical activity Friday was typical.  Four times I lifted the kayak on or off the car.  The drive to and from the river was about an hour.  The carry between the parking lot and the boat launch was only about ten yards, and the paddle out to the gravel bar was about a half mile with the last 40 feet or so pulling the kayak through water only ankle deep.  Except for a short break for a trail mix lunch, the rest of the trip was fly-casting in waist deep water and moving through an area roughly the length and width of a football field.  All very typical of my favorite kind of fishing trip.

Even though this is my favorite fishing, fly fishing for smallmouth bass on the Potomac River, the particular satisfaction I felt about Friday isn't clear to me either.  Objectively, the number  and size of fish I caught were certainly not exceptionally good; two average-size smallmouths in four hours of fishing isn't anything to brag about. However, these two fought hard, jumped multiple times and looked beautiful to me as I unhooked and released them back in the water.

Maybe the satisfaction came from eventually getting results by paying attention to what was going on around me, the number of insects in the air and water and the occasional feeding rise of the fish to them.  I started with a surface slider, switched to a hackled dry fly, then tried a couple of subsurface flies before switching back to the same slider I started with because it seemed to arouse the most interest even though I hadn't landed anything yet.  And there were those rises, not many but regular. Maybe having persistence rewarded was part of the satisfaction.

After returning home from the Mouth of the Monocacy parking lot and putting away the kayak and tackle, I wasn't good for much activity for the remainder of the day or the following day either.  When I wondered why I was so tired, Pam suggested maybe it was old age.  Could be.  Water levels were 1.1 at Point of Rocks and 2.8 at Little Falls which are both common readings for this time of year.  The past month or so has been dry.
Posted by DJones at 12:31 PM No comments: 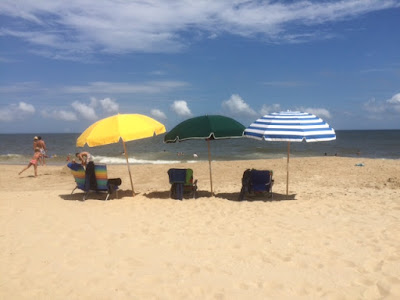 Excellent weather, excellent company with wife Pam, daughter Rebecca, and son-in-law Sean.
Posted by DJones at 10:06 AM No comments:

These are three of the variables that fishermen consider, and when I paused for lunch on a gravel bar in the Potomac near Nolands Ferry yesterday I first wondered about place.  I didn't think too seriously about my poor showing during my first smallmouth trip to Pennyfield Lock a week or two earlier because that had been a Monday on a stretch of the river that gets fished hard on weekends.  Then at least I caught a few bluegills, but my fishless morning yesterday got me wondering if there was something dreadfully wrong with the river.

When my floating fly didn't produced, I tried a large crystal bugger which I tried on both sides of the island but that didn't work either.  I switched to a B&B, a smaller fly that doesn't run as deep as the bugger and got a few takes which came off.  On the last half hour of fishing in the afternoon, I finally landed a few fish, a couple of smallmouths, my first of the season, and a bluegill.  That got me musing about the other two variables:  time and presentation.  Was the success due to presentation, fishing the right fly at the right depth?  Or did the fish suddenly decide the time was right to come out of their stupor and become more aggressive?  The fish don't say, so it's left to us fishermen to think about these things.

There was just time enough to take a picture of the river on a beautiful August day.  Water levels were 2.9 at Little Falls and 1.3 at Point of Rocks. 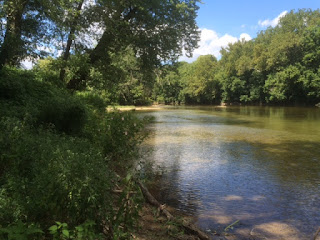 Posted by DJones at 4:53 PM No comments:

A description of a legend's music that captures it for me

"...there was just something different in Mr. Williams's music, the way some paintings are more vivid, more real than others..."

This was from Rick Bragg's book Jerry Lee Lewis: His Own Story writing not about Jerry Lee but about Hank Williams.  For years I've tried to express what stands apart about Hank Williams's music, and I admire how Bragg puts it. His words about Williams's music also describe the way I feel about Hemingway's writing about fishing and the outdoors as compared with the thousands of words I've read from other writers, many of them quite skilled.

Lately Pam has brought back from the local library a number of memoirs and biographies of musicians- Herbie Hancock, Carlos Santana, Gil Scott-Heron, and all contained some worthwhile reading, but Rick Bragg's book about Jerry Lee has been the most fun.  He has an incredibly colorful subject, the expression "larger than life" actually seems too tame to describe someone as outlandish as Jerry Lee Lewis. Bragg is a skillful writer and, also from the deep south, he has a feel for its land and people.  He made me wonder if another place or time could have produced a Jerry Lee.

Bragg has a southerner's gift for story-telling, and his subject's antics over the years produces many great stories.  Since reading this book, I can't help passing on some of these stories to my friends and family at any opportunity.