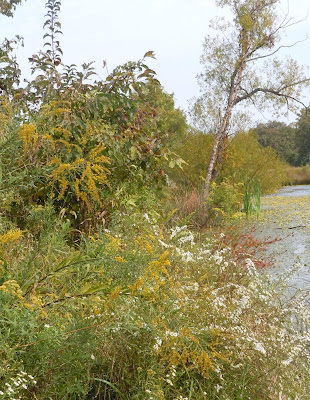 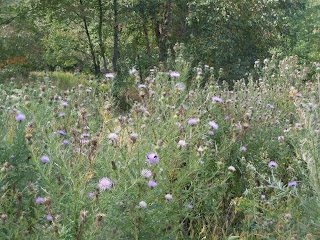 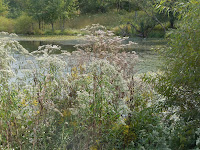 These were taken a few days ago, and even just today the same scenes look different.

It's that time of year. 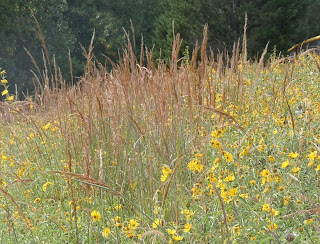 The Breaking Point-Hemingway, Dos Passos and the Murder of Jose Robles


This was one of the many books that Pam brings home from her volunteer job at the local library.  The nonfiction I generally thumb through reading at random until I’ve exhausted my interest, but sometimes this interest is sufficient to cause me to read the entire book.  I got so engrossed in Stephen Koch’s story of how a murder during the Spanish Civil War in 1937 effectively ended the friendship between two major American writers that I read the book twice.

Ernest Hemingway had a pattern of renewing his artistic creativity through a drastic change in his personal life, and he accomplished this by changing the woman in his life.  He was in his second marriage and was undergoing a crisis of creativity when he met his new woman in late 1936:  “At twenty-eight Martha Gelhorn was radiant with self-possession and her own excellence, quite tall, walking with a swaying (some thought practiced) stride.” Gelhorn was very much part of the 1930’s generation of political commitment unlike Hemingway who was basically apolitical and up until then had viewed such commitment as the enemy of art.  When Gelhorn strided into his life so did politics, at least for a while.

In contrast, John Dos Passos’ creativity was not cyclical.  His books were popular and widely admired in the 1920’s and early 30’s, and he was intensely political.  Jose Robles, a Spaniard, shared Dos Passos’ left wing views, and the two friends became strong supporters of the Republic against the Fascist insurgents under Franco.  Dos Passos joined his friend Hemingway, who also backed the Republic, in Spain where Robles held an important position.

From the book I learned that the Civil War was actually three way because the Soviets, who supported the Republic with arms and manpower, regarded anyone like Dos Passos and Robles who were not Stalinists as much their enemies as the Fascists.  They manipulated Hemingway, who was clearly never a Stalinist, with the lie that Robles was killed because he was a Fascist spy.  Dos Passos never bought this story, and his emotional disagreement with Hemingway led to the end of what had been a warm friendship accompanied by their mutual admiration of each others’ writing.  The other casualty of the Robles murder apparently was, for Dos Passos, the quality of that writing because the author says that “The bullet that killed Robles also shot down the soul of Dos Passos’ art.”

In America there was also a war but one fought with words rather than bullets as in Spain.  Among the left wing intellectuals the bitterness among the Stalinists and the Trotskyites and others persisted for years after.  The Hemingway/Dos Passos conflict was a battle of that culture war.  I was surprised to read a reference to novelist James T. Farrell's political activities.  I read him avidly when I was young, but he has seemingly been forgotten by the public and critics.  George Orwell appears in a striking scene with Dos Passos.  Orwell fought with the Republic’s forces but hated the Stalinists and was angry with the democracies of the West for their nonintervention in the Civil War.

Hemingway’s artistic creativity was renewed, and the author considers For Whom the Bell Toll which came out of the experiences of the Civil War to be one of his best novels.  Dos Passos never again achieved the heights of his earlier successes, and the author writes that he “never got free of his entanglement with that enemy of art, mere political opinion.” 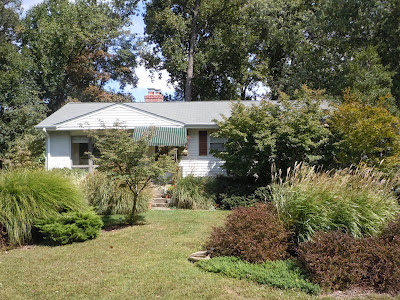 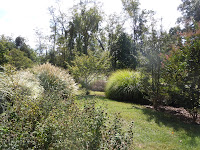 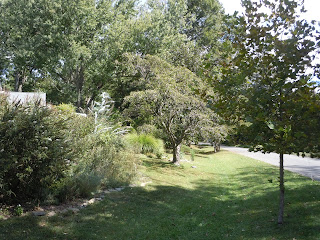 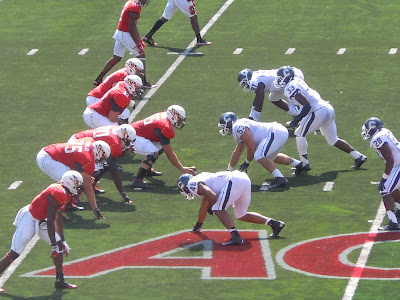 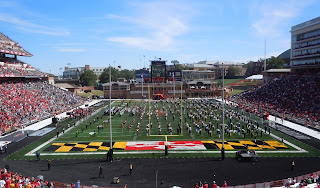 Posted by DJones at 7:35 PM No comments:

In the summer of 1974 I taught camping skills at a day camp on the Cathedral grounds.  In those days, there were thick woods directly behind the building, and coming out of them and beholding this Gothic structure was an odd sensation something like being transported suddenly to Medieval Europe.

I don't believe I've walked around the grounds since then, and many things change in 38 years.  The land is now mostly developed with parking lots and athletic fields for the schools associated with the Cathedral.  What remains of the woods is no longer wild but more of an urban park.  I tried to capture some of the feeling I once had with these two pictures taken from the same place.

First I photographed the Cathedral: 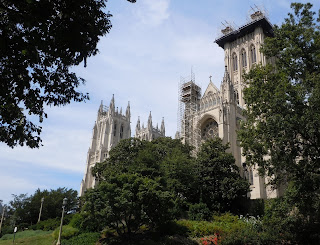 Then I turned around and took a picture of the
wooded parkland: 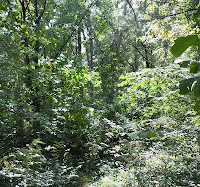 I was a little shocked to realize that those 6 to 10 year olds that I taught knots and fire making are now well approaching middle age.
Posted by DJones at 4:24 PM No comments: 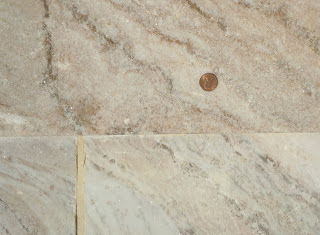 Examining different rocks used at the University.  This is a shot of the marble steps at H. J. Patterson Building.  If my notes are correct, it is a metamorphic rock containing many different minerals including quartz.  The penny is there to show scale.
Posted by DJones at 4:10 PM No comments: 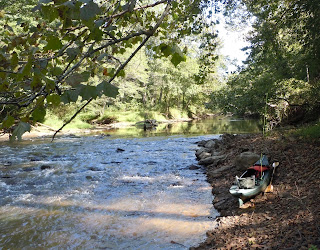 Up the Patuxent from Brown Bridge on Rocky Gorge.  Caught a couple of small ones and didn't feel like going up this set of mild rapids.
Posted by DJones at 4:05 PM No comments:

We hadn't been in a number of years, and we couldn't have picked a nicer day to return. 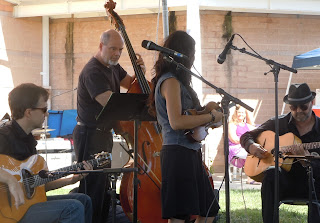 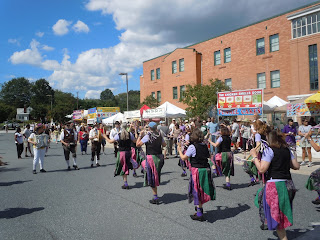 Folk dancers parading in front of some of the food booths. Some interesting crafts, like these faces carved from wood. 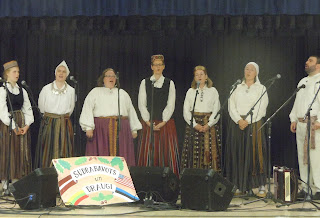 Although I'm mostly a fresh water fisherman I like fishing in the salt, and once a year or so I find myself on a boat trolling.  It's not my favorite way of fishing, but it has its charms.  On a good boat with a good captain and among pleasant companions, it can be great.

Yesterday was one such day.  It was the second time this year I've fished with Capt. Billy Pipkin out of Ingram Bay Marina on Virginia's Northern Neck.  His boat, Liquid Assets, is big enough at 43 feet to handle the sometimes rough waters of the Chesapeake Bay, and he's a skilled captain.

While you're waiting for a fish to hit it's very social, so good companionship is important.  My friend Joe drove down with me from Maryland, and my friend Capt. Dave was assisting as mate.  I had met some of the rest of our group on a trip earlier this summer and a couple were new to me but were friends of Capt Dave, and all were good guys to hang out with.

And I came back with a good supply of filets from the bluefish and Spanish mackerel we caught.
Posted by DJones at 11:38 AM No comments:

I don't think I've ever decided later that going was a mistake.  I've come home comfortably hot, cold, or wet and sometimes discouraged concerning my lack of success, but never sorry I went.

Yesterday I had almost decided to cancel my plans to fish the upper Patuxent between the reservoirs because the forecast was for the mid 90's and I was already hot after my morning old guy exercises, but I happened to glance at the thermometer shortly before 11 and it hadn't hadn't reached 80 degrees yet.  What the hell, it would only be a 20 minute drive and I could always return.

A half an hour later under the shade of the stream-side trees, I was standing in the cool water just over my ankles catching fish:  two small bass on a B&B and about a half dozen fallfish when I went deeper with a crystal bugger.  It's a small stretch of water, so I was finished with it in just over an hour.

Looking back on the week, Monday I caught almost nothing and yesterday it was mostly something commonly called a "trash fish", and yet I returned both times satisfied with good memories of the day.
Posted by DJones at 10:09 AM No comments: