Although some of the buildings in the old commercial part along U.S. Route 50 still look rundown, the homes in the residential street are generally in good shape.  I should have photographed them as well. 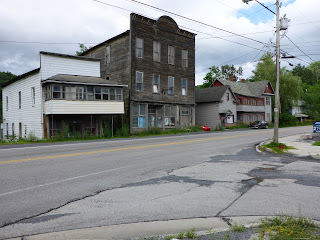 Significantly, the church, which goes back to the 19th century, is being renovated. 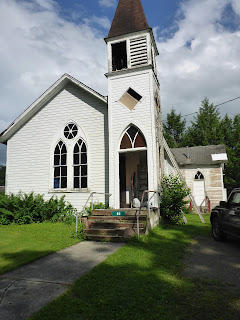 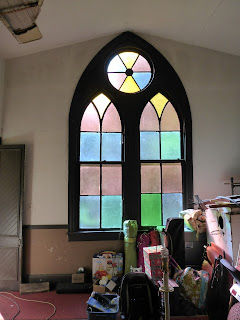 We have lately observed that our travel is restricted to a triangle with Bethany Beach to the east, New York City to the north, and Gormania, WV to the west, and our weekend trip visiting Pam's sister completes the triangle over the past two months.

Posted by DJones at 1:06 PM No comments:

Because of hot, stormy weather lately, I hadn't done much fishing so I got myself back on track yesterday afternoon with a trip to the pond with a 5 weight fly rod.

Since the small, bream-sized flies at the shallow end only yielded one small bluegill, I worked myself over to the outlet side and tied on a larger, more bass-sized fly which proved immediately successful.  Got a number of good bluegill and one small bass before going home for dinner.

Although this photo was taken during my walk this morning, it's pretty much where I was fishing yesterday. 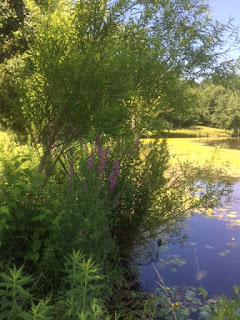 I first started thinking about change when I first began college.  Everything was so different in my life from what had been routine and familiar, and adapting was sometimes challenging.  At that time, in the fall of 1965, America was changing too, and part of my adaptation to the national changes was to retreat into political conservatism for a spell.  In the next few years I switched back and forth in my politics which is common during college years, at least during those college years.

Gardeners are always conscious of change- changes in weather, changes in seasons, etc., but sometimes we have to deal with unexpected sudden major changes.  Such is the case now because a storm last Thursday uprooted a large oak tree in our back yard.  Although the bulk of the tree trunk fell into the neighbor's yard, we were left with an upended stump and root system about 12 feet in diameter: 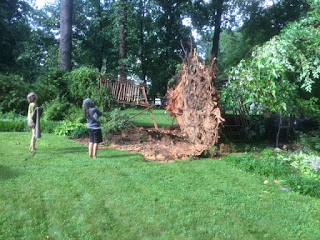 The tree crews have been working on removal for the past few days, but when they finish we'll have a gap where once stood trees, decorative plants, and two of my screening bamboo structures (One of the damaged structures is visible near the center of the above photo.).

Just prior to the storm, we had been talking about how great the yard looked and how we should invite people over to show it off.  The front and side yards are fine, and about 3/4 of the back yard was undamaged, but it's discouraging to have to replace years of work.  A young neighbor came over recently to survey the damage and to admire what's remaining, and he remarked that we should look on the event as an opportunity.  He's right, of course, but it's easier to look at things that way when you're his age, about 30 years younger than we are.  That garden and the look of the back yard had been just as we wanted it.

It's often said that coping with change is harder as you get older.  Even so, we've managed to be philosophical about this and console ourselves that no one was hurt and our living space was undamaged.

A knife and a prayer

When I was nine or ten I spotted a magazine ad for a knife for 25 cents.  There were only two magazines I read at that age, Boys Life, which was oriented towards the Boy Scouts and outdoor activities, and Sports magazine whose orientation is self-explanatory.  That was my world, and a pretty good world it was.  Anyway, I put a quarter in an envelop, dropped it in the mail, and eagerly awaited the arrival of the knife.

A couple of weeks later, my mother told me the postman had delivered a small package for me.  I answered that I knew the knife would come that day because I had prayed for it the night before.  I can't say I actually remember tearing into the packaging to get out my prize, but I'm sure I did so with great excitement.  The shiny new knife looked wonderful to my youthful eyes.  The handle was a deep, dark red, and I couldn't imagine anything as beautiful as my new knife.

A few days later while in the woods where I spent most of my time, I stuck the knife in a dead tree.  I didn't stick it in far, and the weight of the handle combined with gravity to pull the knife down to the ground.  Unfortunately, the point remained in the tree.  Because of the cheap steel used for the blade, I now had a knife without a point.  Although it still might have been useful, I lost all interest in the knife after that.

Because of that experience, I decided to be careful what I prayed for in the future.  Some things aren't worth prayer, and sports fans should keep that in mind.
Posted by DJones at 10:52 AM No comments:

Around the Boroughs of New York City

After spending most of Friday in Manhattan, son-in-law Sean drove us from Brooklyn up into Queens where we stopped first at the Museum of Moving Images.  I've mentioned here that Pam and I were big fans of the Mad Men television show and so were Rebecca and Sean, so we were all interested in the exhibit about it.

Here is the set for the Drapers' family kitchen: 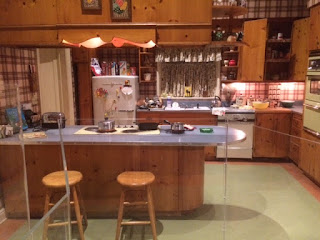 We then went to the PS1 branch of the Museum of Modern Art, also in Queens, where our favorite exhibit turned out to be Cabaret Crusades by Egyptian artist Wael Shawby.  It tells the story of the Crusades from an Islamic point of view using marionettes.  This may sound odd, but it was really quite compelling, and we all wished we had the time to see the entire film. These are some of the glass marionettes used, and some of them are hundreds of years old. 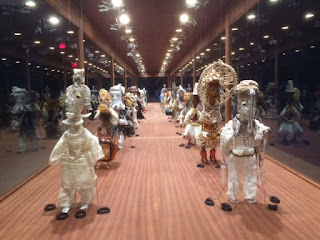 We then walked to a Philippine restaurant in honor of 1/2 of Sean's ethnic background (from his mother side. Irish-American from his father). Virtually everyone in that area of Williamsburg is between 20 and 40. The one other gray-haired man we passed did a double take when he saw me probably because he was shocked to see someone else his age.

After dinner we drove through the eastern part of Williamsburg which is all Hasidic Jews. Since it was past sundown, their Sabbath was over and they were all out on the streets taking advantage of the pleasant weather. Among the scores of those families, all dressed in black and white, males wearing hats and women in long dresses, there were two young women, one in shorts and the other wearing a very short skirt, who obviously were not Hasidic. My daughter said that the Hasidic men often call out to such women to request that they dress more modestly.

Leaving Williamsburg, we passed through the edges of the Bedford-Stuyvesant neighborhood which remains almost all African-American. The border between the two areas looks fairly distinct, and I understand that the two groups live quite separately. Further south in the Crown Heights area of Brooklyn where my daughter and son-in-law live, the area is more diverse: hipsterish (although my daughter resents that stereotype) young people mostly white, Blacks usually of Caribbean background, and Orthodox Jews.

Here are Sean, Rebecca, and Pam taking a break at the Museum of Moving Images: 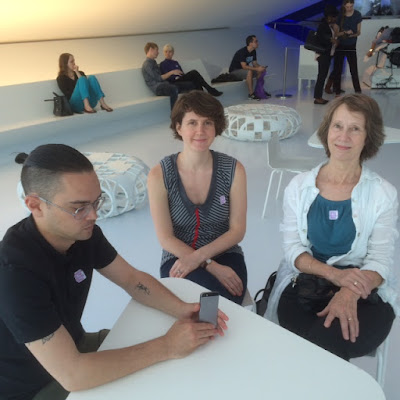 In a collection of Tom McGuane short stories I've been reading, one character asks an older man who used to fish with his father whether his father was a great fisherman.  "Not really, " the older man replied, "but nobody loved it more."

This is actually the second time McGuane has used this piece of dialogue.  I remembered reading it years ago, and it stayed in my head because I always thought it was a beautiful thing to say about a fisherman.  I've read a lot of McGuane and was convinced I recalled the quote from one of his essays and spent a couple of unsuccessful hours this afternoon going through collections of fishing essays in my extensive library of outdoors books trying to find the place it first appeared.  Then Pam came home and found the source within a few minutes of searching the internet.  (I had also tried the internet, but she's much better finding things in general, whether on the internet or in the refrigerator.)

McGuane originally used the exchange in a novel, one of the few we don't own, so I apparently read a public library copy.  It's such a great quote it deserves repeating.  I wouldn't be upset if it was said about me and would readily understand if some friends who fished with me only a few times when I happened to be having bad days (casting in the trees, poorly tied knots, etc.) could've concluded that for a guy who talks about fishing so much, I'm actually not that good at it.  By contrast, someone who happened to have observed me when everything seemed to going great might believe me better than I am.  Either way, I would hope that to anyone it would be obvious that nobody loves fishing more than I do.
Posted by DJones at 9:04 PM No comments: