Generally my dreams concern routine, boring actions like buying tires or doing taxes, but last night was an exception.

The phone rang, and I instantly recognized the voice as Marv, my friend who died last May. He said something like, "I was thinking about our discussion about yadayada..." It was common for us to continue previous conversations like that, so the only thing out of the ordinary was that he had been dead for eight months. When he stopped talking I said, "Well, if you can use the phone in the Afterlife, you can probably just come on over, " and he agreed to stop by the house.

As is common in dreams, my house didn't look anything like any house I ever lived in. It was multiple stories with an open stairway, so you could see people traveling between floors. It was from that vantage point that I saw Marv coming up to the floor I was on, but he wasn't moving with a walking motion. He was gliding up not so much like a ghost but more like a person on an escalator. In fact, the scene looked like a department store even though it was my home.

Marv didn't resume our phone conversation. He just settled down on the floor in a corner and watched the other people who had also come by the house. There was music playing as there usually is when we have visitors, and the song had a traditional country feel like bluegrass. I started dancing by myself in an old fashioned style like a hoe-down, and the dream pretty much ended. When I awoke I reviewed in my mind some details, especially Marv's appearance, because I knew Pam would be interested. He was younger looking than I had ever seen him alive, like he may have looked in his early 30's. His hair was dark without any gray and he was slimmer.

Pam has said that she envisions Marv's continued presence as sitting on a couch with her father and the two deceased men look down on we-the-still-living and criticize and laugh at our actions. George is drinking beer, and Marv is smoking marijuana. Maybe Marv settling down silently in a corner of my house in my dream is a similar vision that he is still with us.
Posted by DJones at 10:42 AM No comments:

Nice noisy though, the clinking of ice melting off trees. 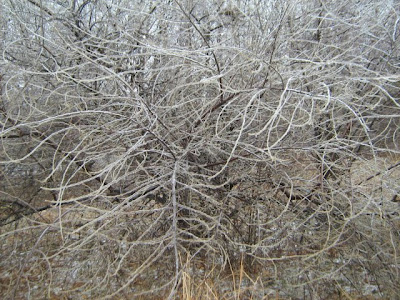 We had an ice storm last night, and today the temperature hovered just above freezing which made for a gradual emerging. 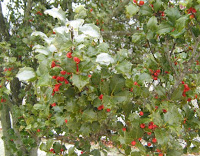 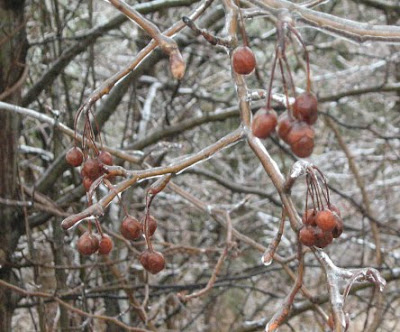 Posted by DJones at 3:27 PM No comments: 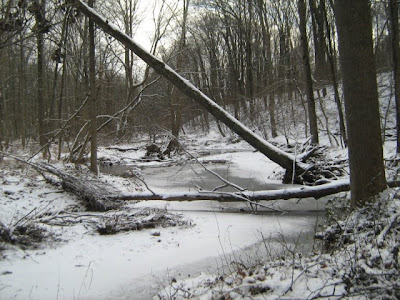 Had a couple of inches fall last night which is a good amount for following animal tracks. The possible presence of a coyote which I mentioned recently got me interested in learning to identify animals by their tracks, and it's a good learning activity to go along with walking in the woods.

The close similarities among the canine tracks makes it unlikely I'll learn to distinguish coyote from foxes or either from domestic dogs. It's rare around here to see a dog without his owner nearby so when I spot a canine track with no human tracks around I can be fairly certain it's something other than a domestic dog. I followed such tracks for a while today, and there were enough tracks where the claws were clearly visible to rule out it was any sort of feline. It could be a coyote, but I'm leaning more towards a large fox.

Although a large fox makes a larger track than a smaller fox, when you are comparing size tracks among different species things are different. A rabbit's tracks, for example, can be larger than a deer's.
Posted by DJones at 3:04 PM No comments:

Winter is for Walking 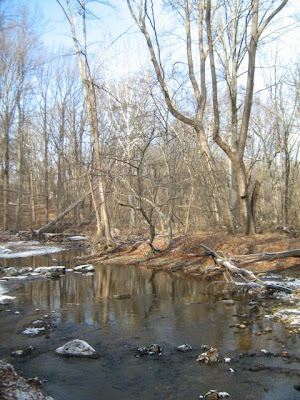 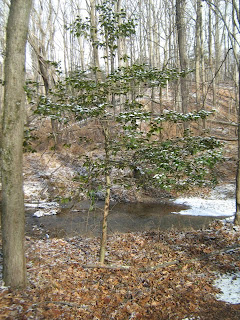 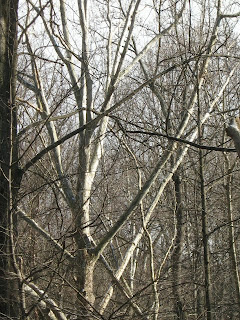 It's better now than in warm weather when it makes you hot and sweaty. Last night we had another light snow, and I went out again along Paint Branch Creek.


The green of holly trees stands out among the browns and grays of the winter woods.


...as does the white trunks of the sycamores.
Posted by DJones at 1:17 PM No comments: 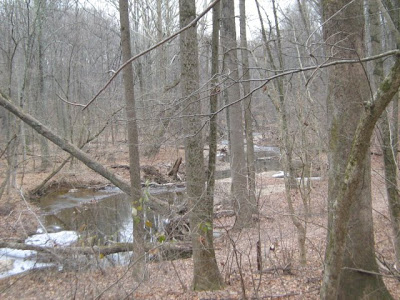 The tiny stream that forms the pond in the park empties into a larger stream, Paint Branch Creek, which meanders through the suburbs and joins the Anacostia River near the Maryland/DC border. The Anacostia bisects the Nation's Capital for a short distance before it empties into the Potomac.

Paint Branch contains brown trout in some of the upper reaches, so I stay on the lookout as I hike along it. No trout sightings, but many animal tracks to keep me occupied despite the quick melting of the snow dusting we received this morning.
Posted by DJones at 1:24 PM No comments: 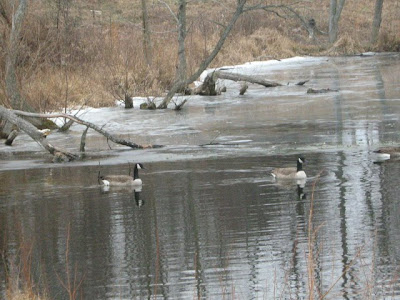 Temperatures got up into the 50's today. Good day for the geese to swim and for people to go for a walk.
Posted by DJones at 4:50 PM No comments: