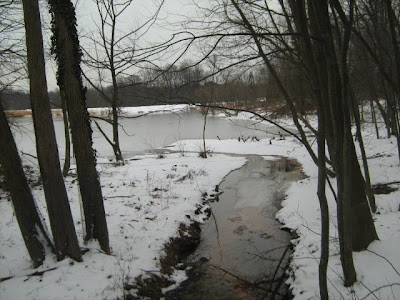 After a few mild days, it's cold and snowing again. It's 18 degrees as opposed to near 60 earlier this week when I took advantage of the warmth to go trout fishing on a section of the Patuxent River below Brighton Dam which I had never before fished. A day later I was about 80 miles down river in St. Mary's County when Pam, Marv, and I visited John Marum who's soon to be married to his high school sweetheart who he re-met following his 50 year high school reunion.

We had a number of viewings of the otter for a while, but we haven't seen him in about a week. He may have taken up residence in the abandoned beaver lodge, or as the beavers did a year ago he might have moved on. Like the beavers, he was fun to watch.

Finally getting used to using a digital camera and added a picture of some my pipes to the pipe smoking post below. Up to now, all the pictures here were taken by Pam which is odd considering what a big role conventional, non-digital photography once played in my life.
Posted by DJones at 11:48 AM 1 comment:

Wildlife at Home and in the Park 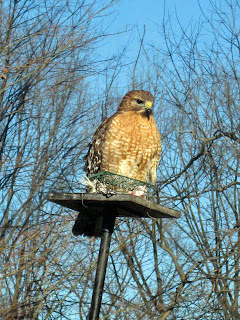 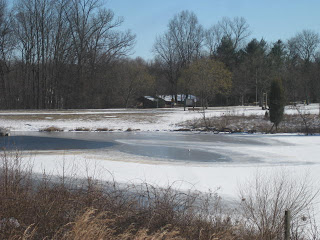 Impressive looking hawk visited the bird feeder on our deck. He was attracted by the fresh beef suet Pam put out. She says that hawks never come to the commercial suet.

Yesterday we saw an otter in the pond in the park. At first we thought it was one of the beavers who residing there for a few years but seemed to disappear a few months ago. We talked with a man who told us it was an otter and that he has been watching it for a few weeks. He's seen it dive and surface with a fish and it looks remarkably like a dog. We returned this afternoon hoping for a better look but didn't see the otter.

Two days ago it snowed for the third time this winter. It's been very cold, and the pond is almost completely frozen.
Posted by DJones at 4:31 PM No comments: