Probably to the joy of the daffodils: 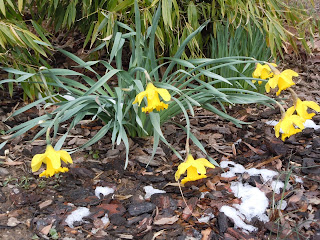 Only Real Snow of the Winter...

...and actually it came in Spring.  Temperatures this March have been lower than normal.  Pictures taken this afternoon as it was turning to rain. 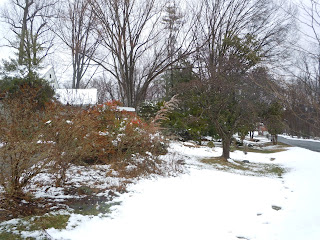 Posted by DJones at 2:51 PM No comments:

Bob Dylan and a Generation's Music

Recently reading a book about Bob Dylan summoned up thoughts I've had over the years about his music and the music of his contemporaries. Like many of my peers, Dylan's music has always gotten into my head, into my psyche, under my skin.  Neil Young's does too, but he and Dylan are sometimes capable of producing lyrics that are, well just silly.  Bruce Springsteen has also produced great music over the years but is more of a craftsman whose lyrics never strike me as silly.  On the other hand, as great as he is, Springsteen's lyrics don't get to me like Dylan's or Young's at their best.

A year or two ago, I read Keith Richards' book which makes clear that the Rolling Stones initially set out to be good enough  blues musicians to be respected by their African-American blues heroes, somewhat like Dylan's early goal of carrying on Woody Guthrie's folk tradition.  I suppose at varying levels they all wanted to be rich and famous.  Many young men do, but the immediate goal for both Dylan and the Stones was artistic according to their individual criteria.  I doubt that any of them had any idea about how all-powerful their fame would become.

In economists' terms, they all presented a product, their talent.  For both Dylan and the Stones, their first records were covers of other people's songs, but it wasn't until they began recording and performing their own compositions that the true extent of their talent emerged.  This talent encountered a demand that, for reasons that were demographic, cultural, and sometimes political, was huge.  So voracious was this demand and the resulting fame that it swallowed some of the rock stars-  Hendrix, Joplin, Morrison- all victims of the pressures of this particularly intense fame's appetite.  John Lennon and Brian Jones also and perhaps the King of Rock of Roll, Elvis himself, perished because of it.  Others followed.

But Dylan escaped.  He slipped away in various disguises before being destroyed.  The disguises varied.  Once it was as a  simple country singer, and once it was as a born-again Christian.  Now he's a disc jockey and a working musician on a nonstop concert tour.

"Spokesman for a Generation" was too heavy a crown for Dylan to carry, but he'll never escape that significance for those whose lives were affected, even changed by his music.  Mine was one of them.
Posted by DJones at 12:23 PM 3 comments: 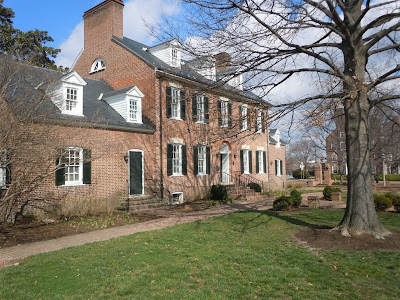 Having lived all my life in the Maryland suburbs, I'm not used to seeing old buildings during my daily routine.  That's why a structure built two centuries ago to serve travelers between Washington and Baltimore stands out.  Construction of the Rossborough Inn began in 1798 on what is now U.S.Route 1, so it goes back to before there was a college on the surrounding land.  What became the University of Maryland was chartered as Maryland Agricultural College half a century later, and as it grew it encompassed the Inn which has been in continuous use for events and offices since. 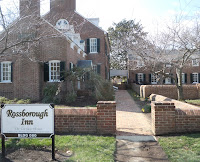 In April, 1864, the Inn was occupied by the Confederate Army who were welcomed by the students and faculty which is characteristic of the sympathies of many Marylanders at that time.  Locals joined the Rebel officers in an evening party during their stay.

The Rossborough has long been rumored to be haunted because of numerous sightings of ghostly figures over the years and as late as 1981 by a presumably sober University employee. 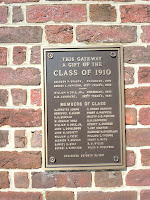 I noticed this plaque from the class of 1910 for a gateway along side the Inn.  One of the names on the right column is Millard E. Tydings who became a noted United States Senator from Maryland and whose step-son, Joseph also served as a Senator.  The elder Tydings has a hall at the University named for him and also a bridge across the Susquehanna River near the family estate. 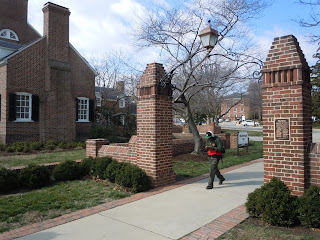