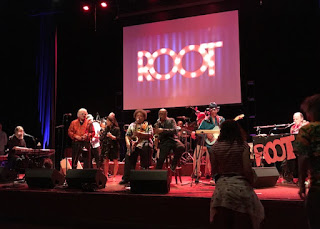 Friday night Pam and I went to The Blues and Jazz club in Bethesda for this tribute show. The crowd was loud and enthusiastic and included several people I knew.

How can I explain Root Boy Slim? Maybe I could say he was a unique product of a certain time and place. The time was the late 1970's and the place was Washington, DC. Root Boy's appeal didn't seem to transfer outside this area, but for some of us he was a local legend who we remember fondly.

He was born into a wealthy family and went to an Ivy League school, I believe, but the culture and politics of the 1960's took their toll on the Root Boy. Many of his songs were autobiographical, such as "I used to be a Radical" which tells how he tried to climb over the White House fence and "Dozing and Drooling" which describes the effects of the prescription drug he was later given (thorazine, I think.). Mostly though, Root Boy was about fun. "You Broke my Mood Ring" and "Boogie 'til You Puke" were probably his best known songs.

The band we listened and danced to Friday contained at least one former member of the original group which Root Boy named The Sex Change Band. Saxophonist Ron Holloway went from back-up to the Root Boy to a successful jazz career. He seems to still operate from this area because we saw him last year sitting in with Little Feat at the Warner.

Root Boy died a couple of decades ago. It was nice to see so many people who remembered him. We had a good time, and I was thankful that once again in my life I was able to call out "Root!"
Posted by DJones at 8:02 PM 2 comments: 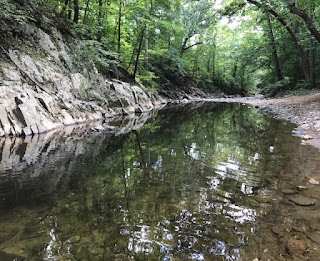 Yesterday afternoon while I was fishing the stream pictured above which is located in the Maryland suburbs, I came across a pool where I spotted a number of nice bass. Although I carefully got to a place where I was partially hidden, the fish were spooky and I caught only a couple of bluegills. While I was deciding whether to change positions or to change flies, a woman came walking along the trail on the other side of the stream with her dog. She stopped at the pool and threw a ball into the middle of the stream, and the dog went bounding in to retrieve it. Of course all the fish scattered for cover.

Rightly or wrongly I decided to just leave without saying anything to her because I was so pissed that I was afraid I'd say something to the old bat (she was probably about my age) I'd later regret. I walked downstream where I caught a few more fish before I decided to pack it in for the day. I was wading across the water through a shallow area when a young man who looked to be in his twenties came walking up the trail. He also had a dog with him.

"Are you fishing here?" he asked.

"I was, but I'm pretty much finished," I answered.

"Is it ok if we come through?" he asked.

Millennials often get a bad rap. The old woman could learn something about consideration of others from that one. I know that one reason I'm defensive for that age group is because my two children are on the upper range of that demographic. They and their friends are nothing like the negative generalizations I sometimes hear about millennials. They are honest and hardworking and don't whine about the crummy circumstances handed to them by the older generations. Another reason I defend the millennials is that my group, the baby-boomers, were also subjected to unfair and inaccurate stereo-types by some of our elders. Old people have been complaining about the young forever. Those geezers are probably just jealous.
Posted by DJones at 12:36 PM No comments:

Eclipse Day in the Park

I didn't take any photos of the solar eclipse yesterday because there are so many other pictures around, taken by skillful photographers using excellent equipment. Instead, I photographed people who gathered at the park which had been organized for the event.


The first thing I noticed when entering the park was a long line of people who I learned were in line to pick up glasses for viewing the eclipse.

The crowd extended from the pond to the field near the day care center. 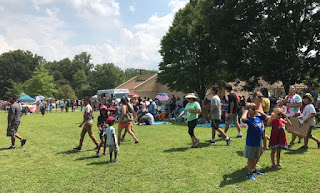 There were refreshment stands and a band.

All in all, a festive atmosphere. It was strange seeing all those people in an area that I walk through everyday. Some of those days, especially the cold ones, I'm the only person there. 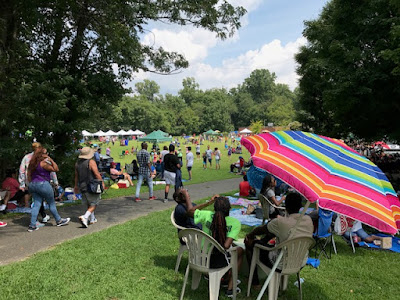 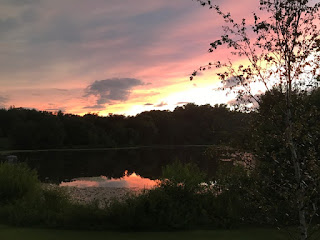 Posted by DJones at 8:47 PM No comments:

Went to the Nationals game this afternoon with neighbor Jim. Nats lost 3-2 but had a good time. 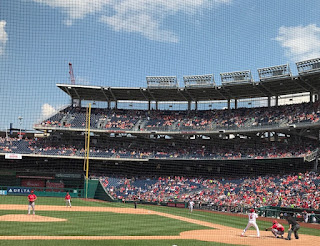 Posted by DJones at 6:03 PM No comments: 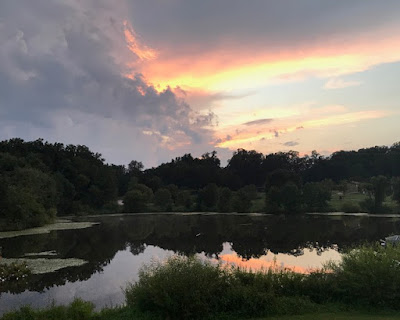 The new bedding area with the bamboo pergola

We're pretty happy with the looks of the new bedding area in the back yard garden. The area came about when a storm blew down an oak tree two years ago. The root ball pulled up about one quarter of that garden, and we've been rebuilding it since. 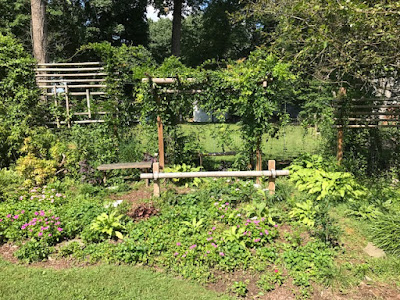 The big addition was the bamboo pergola in the center of the photos. As planned, the structure is supporting wisteria and cross vines. 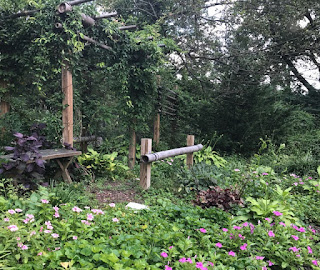 Posted by DJones at 4:19 PM No comments:

Last Saturday we went with out neighbors to Lexington Market in Baltimore. The picture below shows Pam and Marianne on their way to the entrance of the market which, as the sign says, has been in continuous operation since 1782. 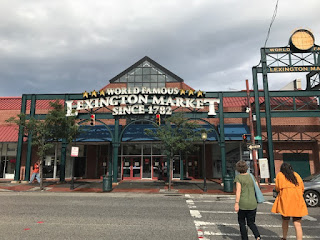 The big draw for us and many was Faidley's seafood which brags that it has the best crab cakes in the city. They were certainly among the best I've ever had. 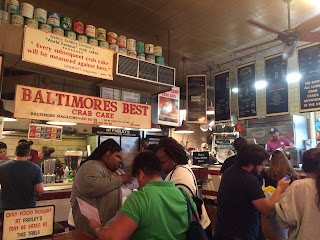 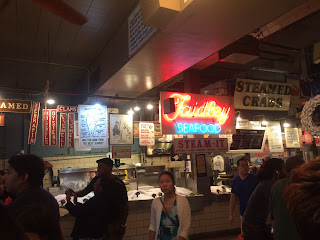 They also feature a raw bar whose oysters looked tempting, but we didn't sample any. 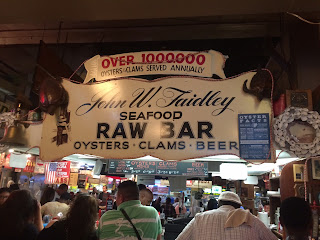 Pam took all of the above interior shots. In addition to the crab cakes, we also bought some cake to take home. The coconut cake is delicious. I haven't had any of the other yet which is red velvet.

Posted by DJones at 4:08 PM No comments: