Every day you're alive is a good day...

I try to keep that in mind and especially right now after attending my cousin's memorial service Saturday in New York City. Like his father, who was my favorite uncle, cousin Stuart died at 58.

I always knew Stuart was very smart and a very nice guy, but even knowing that it really impressed me hearing the steady stream of New York City attorneys who spoke not just of his brilliance as a lawyer but how he was admired for his kindness, warmth, and honesty.

The crowd was huge and the service long although quite moving, and afterward there was a gathering at the Park Avenue apartment of one of Stuart's brothers in law. That apartment (for sale at 16 million) was a peek into the world of the 1% we've been hearing so much about lately. In the dining room, the owner showed me where my cousin would place the pies he baked for Thanksgiving Dinner every year. Stuart excelled at everything that grabbed his interest: as a musician, historian, gardener, and a baker and probably other things as well.

Later my daughter Becca led my wife and I through the wind, the cold, and the snow to her Brooklyn apartment to spend the night. With many of the subway trains not running because of power failures, the trip was complicated and difficult after a long day. At the apartment she and her fiancee, Sean, had Indian food for us, and it was a huge relief to be warm and dry. The next morning the sky was blue and sunny when my daughter showed us her neighborhood as we went out for bagels.

After leaving my daughter, my wife Pam and I traveled back to Maryland under the sunny October sky, and I thought of cousin Stuart's widow and two children and of how lucky I was.
Posted by DJones at 10:06 PM No comments: 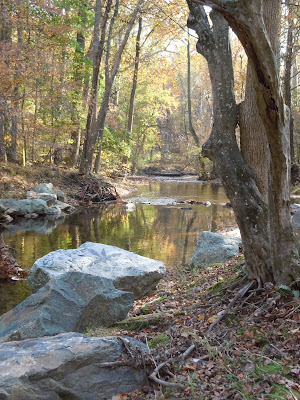 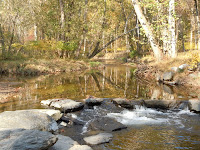 Posted by DJones at 3:57 PM No comments:

Views from atop the campus garage 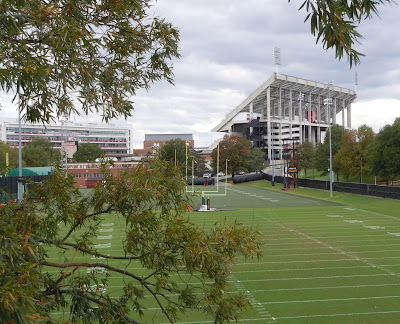 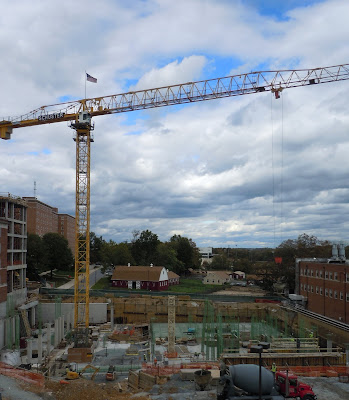 Posted by DJones at 3:12 PM No comments:

Patapsco below the bridge 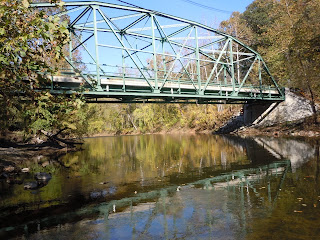 Trout fishing continues to be good, and weather is excellent. On a short trip today went downstream and caught another lively rainbow trout and two bream, all on a black marabou bead head streamer. Water lever 1.9 at Hollofield.
Posted by DJones at 4:54 PM No comments:

Rainy week fishing and a walk 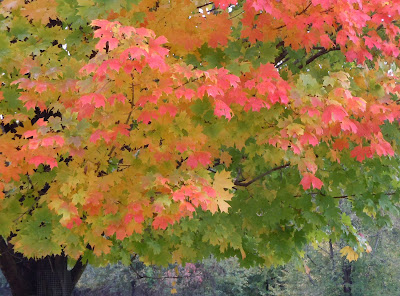 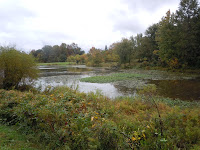 October is a good month for fishing and appreciating the changes that autumn brings.


In between rains, I made two trips to the Patapsco this week and totaled three nice rainbow trout, two smallmouth bass, and a couple of dozen bream. Water levels were 1.74 Monday at Hollofield and 2.24 today which I thought was a little high to go out, so I stayed near home and 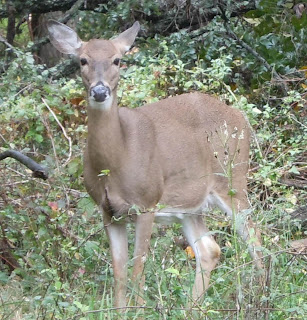 walked in the park.
Posted by DJones at 12:24 PM No comments:

Not many of them are there? At least, at the national level.

I've been thinking about this because there's been a lot of discussion about New Jersey Governor Chris Christie's weight and whether America would elect a fat guy as president. We generally don't, but we also don't elect bald guys and short guys either.

During my lifetime, only Bill Clinton leaned towards being hefty among presidents, but I don't think many considered him fat. Eisenhower was the only elected bald president, and he twice defeated another bald guy, Adlai Stevenson. Yeah, Jerry Ford was bald, but was never elected to the office. Short guys don't get much of a chance either as the shortest one in my memory was Jimmy Carter who actually was about the US average in height. He looked short and slight next to Reagan, however.

None of these characteristics have anything to do with intelligence and judgment, and I'm sure there are short, fat, bald men (and short, fat women) who would make fine presidents, but they may never get a chance to prove it.
Posted by DJones at 11:20 AM 2 comments: