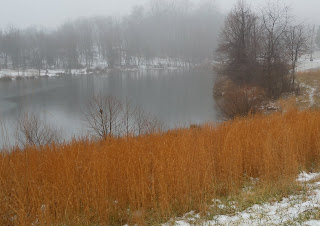 Posted by DJones at 2:37 PM No comments:

Birds currently around us

The Ring-necked ducks at the pond have grown to five. They're fun to watch dive under-water. 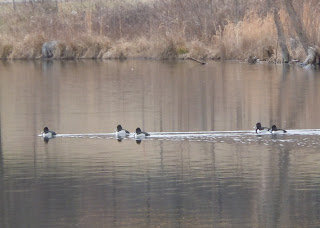 We frequently see hawks but not usually this close to the house. We believe they are Red- shouldered hawks. 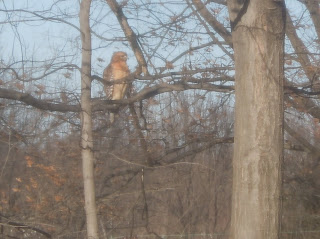 Posted by DJones at 4:34 PM No comments:

More thoughts on cars and rock and roll...

I'd been consciously aware of the pleasures of cruising while listening to rock long before writing the previous post, but putting those musings into words brought about some new thoughts about the subject.

For example, I realized that my association with rock music and cars was so strong that for much of my life I seldom listened to that type of music in any other context. As a teenager, I bought jazz and folk records and sometimes heard those artists live but didn't buy rock records or go to rock concerts until my 20's. Now in my 60's, I still sometimes buy the music and go to concerts.

Having heard much of the great 1960's rock initially through tinny- sounding car radios, it was a revelation when I started listening to quality sound systems. High fidelity brought a different dimension to rock and, in some ways, I am still discovering the beauty of some of the old music. In recent years, I have bought Beach Boys CD's although it wouldn't have occurred to me to buy the records when they were new. Nah, the Beach Boys were to for driving with your friends to the hamburger stand or for on the way to pick up a date. Those melodies and harmonies, however, contained nuances and subtleties that are missed unless played through quality speakers or headphones.

But although the sound quality may have been lacking, the power of the music was there. "Sugar-pie, honey-bunch..." sang the Four Tops in the spring and summer of 1965, the year I graduated from high school, and that song seemed to be in the air every time I was in a car. It made me feel good then and it still does.
Posted by DJones at 11:38 AM No comments:

"Cruising and playing the radio..."

In a lot of ways I really haven't changed much in behavior since my late teens, nearly a half century ago. For instance, I still like driving around listening to the car radio, and my choice of music is still usually rock and roll. Like one radio station described their rock playlist and target demographic: "It's the soundtrack of your lives."

Performers such as Chuck Berry and Bruce Springsteen have reflected in their lyrics this association of rock and roll with cars. I guess a driver's license often represents freedom to the teenager, freedom from parents, schools, and other adult authority. There's a freedom about rock and roll too. In the 50's communist Russia tried unsuccessfully to suppress the music, probably because they recognized this, but the USSR is no more and rock and roll remains.

So is it that I've never grown up, or am I still seeking freedom? I prefer to think that as an American I like to revel in my freedom, and the music makes me feel good about it.

Anyway, I first listened on the AM dial, but in the late 60's it was mostly on FM. AM radio still had decent classical and country music, but as I said previously I mostly listen to rock and roll when driving. Eventually I felt a similar deterioration of rock music on FM that I had experienced on AM. There was a drought in suitable cruising music until satellite radio, XM and then Sirius XM, came along for me in the 2000's. When a great song comes on just as I've arrived at my driving destination, I'll either drive around the block or sit in my car until it's finished, just as I did as a teenager.
Posted by DJones at 3:23 PM 1 comment:

Temperatures over 60 degrees gave me hope of catching something at the pond, so I put in about an hour this afternoon. Crappie will sometimes bite in cold water, and I hoped there may even be a few holdover trout from last spring's stocking. Didn't catch anything though.

Just a few nights ago it went down to 16 degrees and didn't rise above freezing all day which accounts for the ice off the deep end up to twenty feet in some places. Also, there were about 150 geese which limited the areas suitable for fly casting.
Posted by DJones at 6:56 PM No comments: 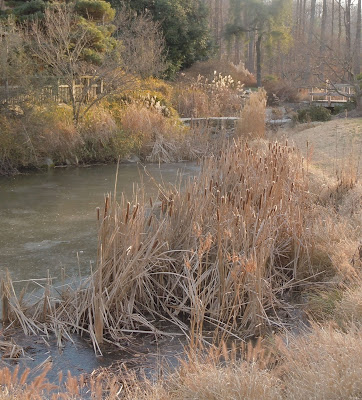 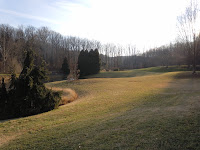 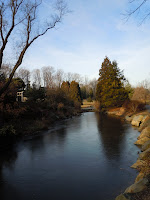 Fewer people around after Christmas. 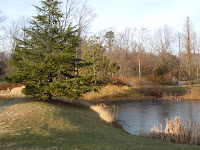 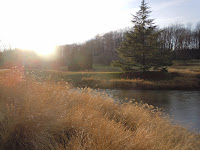 The House and Yard 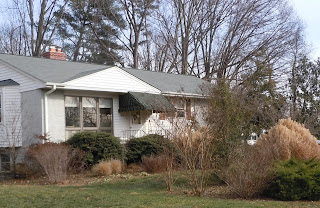 Blogs are useful to document things. I've used this one to document fishing trips, vacations, and the look of the surrounding outdoors areas at various times of the year and have enjoyed looking back at the pictures later. While I don't expect the pictures to be particularly meaningful to anyone else, they are to me. I decided that pictures of the house and yard would be of similar future interest, so these are my baseline. 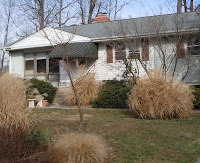 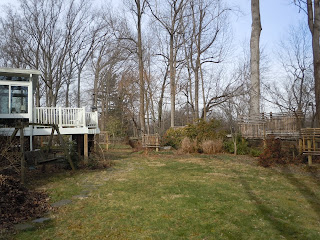 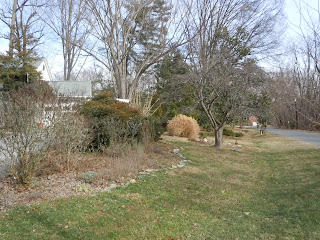 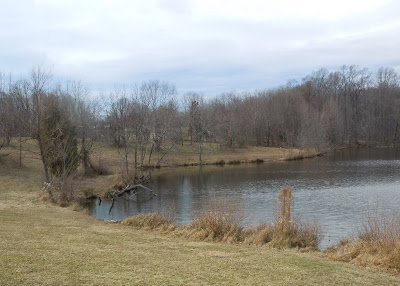 It's been mild so far this winter, but that will change.
Posted by DJones at 5:21 PM No comments: