Mountain streams, a reservoir, and a pond

Last week I fished Owens Creek in the Catoctins and not very succesfully. In April my friend Andy introduced me to an "unknown" stream in those mountains, but we didn't do well there either probably because it wasn't completely unknown, and another fisherman was there ahead of us. For a tiny brook trout stream that's too much pressure.

Also one day last week I drifted around in the canoe in Rocky Gorge trolling a fly on a sinking line and caught one perch.

This week have twice been to the pond in the park and each day caught small bass and bluegills on dry flies.

Had a 5.8 earthquake three days ago. This one was about twice as powerful as the quake a year ago. Two earthquakes in my 64 years, and they came a year apart. A hurricane is moving up the coast and will hit us this weekend.

Posted by DJones at 1:19 PM No comments:

The County Fair was nice... 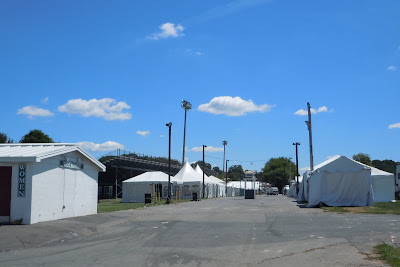 At least I'm assuming it was. I don't know for certain because when we set out to attend it this afternoon we neglected to verify that the Fair was still going on. It wasn't. We learned later that it closed two days ago. Oh, well, we had a nice time listening to music during our drive up to the fairgrounds

So we had a laugh at our own expense, took a few pictures of the abandoned fairgrounds and drove home.
Posted by DJones at 8:07 PM No comments:

The fish aren't where they usually are

At Nolands Ferry on the Potomac. The locations which are generally reliable for me this time of the year aren't producing. Saturday I tried everything at the near-side of the island, and nothing worked. Finally caught a few bream when I moved into slow water on the Maryland side. Hooked one bass but he jumped and threw the hook. The only effective fly was a damsel nymph. Water level .99 at Point of Rocks. No grasses at all.

Posted by DJones at 8:36 PM No comments:

Note to self: Next year more Vinca... 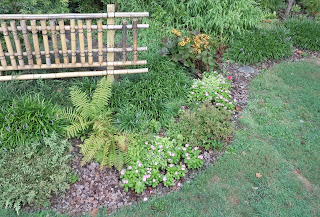 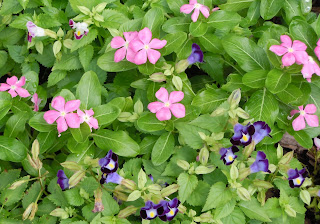 They seem to do well in our yard, and I prefer them over Impatiens for color.


Also, get the purple flowers again, whatever they are.
Posted by DJones at 3:55 PM No comments:

Rarer than a no-hitter in baseball, the Full Ginsburg was named for Monica Lewinsky's attorney who appeared on all the major Sunday political shows in one day back in 1998. Since then, the feat has been equaled by only six other people.

Yes, I know there are some out there whose statistics credit 14 Full Ginsburgs, but some of these were part of a group consisting of two or more other people. To me, as a Full Ginsburg purist, this is like giving credit for a no-hitter when relief pitchers were involved. No, the only authentic Full Ginsburg is the solo performance.

Although it is a political act, no American president has achieved a solo Full Ginsburg, but former VP Dick Cheney did. People speak in hush tones when they cite the only double winner of the solo Full Ginsburg, Hillary Clinton, a record that some feel will stand forever. Among political media hounds, Clinton certainly stands out, but Bachmann is relatively young in her career and I feel is up to equaling or surpassing Clinton's mark, as impressive as it is.
Posted by DJones at 11:30 AM No comments: 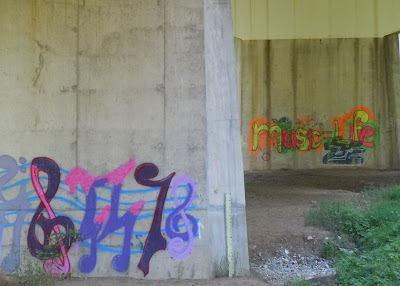 Too many of my pictures taken when fishing look the same; upstream or downstream a Maryland river. After a few hours fishing on the far upper Patapsco, I decided to look for something different to photograph while scouting out new locations.

Bridge underpasses are common places for teenagers to hang out and do the things they want to do away from adult eyes. Some talented music lovers among them must have been responsible for the artwork.

The fishing got better the further away from the road crossing I traveled. The catching was bream (I'm not sure whether they were bluegills or red breasted sun fish, so I going to used the general southern term) and a couple of small bass. As usual on that river, the most effective fly was a beaded marabou streamer; this time olive. Some of the bream were pretty hefty.

Two fishing trips this week indicated reviewing these subjects might be in order. After fishing a small tributary of the Potomac in midweek. I realized many of the fish I've been carelessly identifying as bluegills (Lepomis macrochirus) are actually red breasted sunfish (Lepomis auritus). I caught at least a dozen on the brief outing but no bass. The stream is pictured below.

Friday I fished the Patuxent above Rocky Gorge and was surprised but not shocked to catch a couple of yellow perch on a crystal bugger. I was not shocked because I've caught them in the two reservoirs and in the river where it empties into them, but it was unexpected where I was fishing yesterday. I also caught a fallfish which are common in the trout section of the river that I was just below.

Just before leaving I cut my leg while wading near the bridge crossing where I was parked. The cut was not deep, but I was anxious to treat it to ward off possible infections, and since I was only 20 minutes away I decided to wait until I got home. Although the incident was minor, it did make me consider how it would have gone if it had happened in one of my remote fishing spots. Later I examined my first aid kit for the first time in years and decided that, while I give myself credit for always having it in the car on my fishing trips, I have to improve on checking everything regularly because many items in the kit should be replaced. 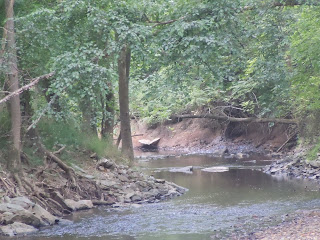 It must have been about 25 years ago that I took the teenage boy fishing. David was the second son of a couple that I have known since junior high school. The couple had married and had children young, but even in the late 60's and 70's when my life was very different from theirs we remained friends. Having gotten into the baby business much later than they, my own children were too small to fish at the time the mother suggested a fishing trip with their son.

We went to nearby Rocky Gorge Reservoir, the same lake where I now keep my canoe. At that time I was car-topping that canoe whenever I used it, so I guess David and I loaded it on whatever car I was driving 25 years ago. We had a good day fishing and kept the bass, catfish, and crappie on David's metal stringer. When I drove him home, neither he or his mother wanted to keep and clean the fish, so it was agreed I would take them. David insisted I keep the stringer as well as the fish. I did and my young family ate fresh fish that evening.

David and I never fished again. He grew into a man, and his family moved from Maryland to the mid-west. I stayed in loose touch with his parents and saw them periodically over the years, the last time at a high school reunion just over a year ago. Although most of my fishing since that trip with David has been catch and release, when I keep fish to eat I use that same stringer that he gave me years before. At those times I sometimes remember how I got it and the fishing that day. Since I last used it a few months ago, the metal stringer has been lying on the downstairs floor where I often sort my fishing tackle while watching TV.

Last night I received an e-mail from the couple informing me that their son David just died. The funeral will be back here in Maryland very near the lake we fished that day. I've thought about taking the fish stringer in the pocket of my suit when I attend the services. It might seem a strange thing to do, but somehow I think it's appropriate.
Posted by DJones at 11:14 AM 1 comment: