At one point during yesterday's walk, I heard what sounded like a hawk. I was along the Paint Branch trail, and shortly after hearing that sound I saw a hawk-like bird flying away from me towards the stream. A few minutes later as I continued my walk, I looked up to see a very large bird perched high in a tree, and the bird's head was clearly white. I believe the bird was a bald eagle.

The Chesapeake Bay is one of the areas of the country where bald eagles are commonly found, and I remember seeing one years ago sitting in a tree along a highway. That sighting was to the east, so it was much closer to the Bay than Silver Spring, but I have heard from a knowledgeable source that eagles sometimes nest this far from the Bay. That source was a ranger at Triadelphia Reservoir who described to a friend and myself the location of an eagle's nest, and I believe we spotted it while canoeing that day.

After walking out of sight of the eagle yesterday, I once again heard hawk-like calls which seemed to come from different directions at the same time, making me wonder if there were two birds. I circled around in the woods to retrace my steps in hopes of getting another sighting, and this time I saw sitting on a tree limb a smaller hawk whose head wasn't white.

I consulted some of our bird books when I got home, and I think that I saw two Bald Eagles. The second smaller eagle was likely an immature bird. I'll never know for certain if I'm right about what I saw, but that's my story. On the way home I stopped to take this photo of the pond: 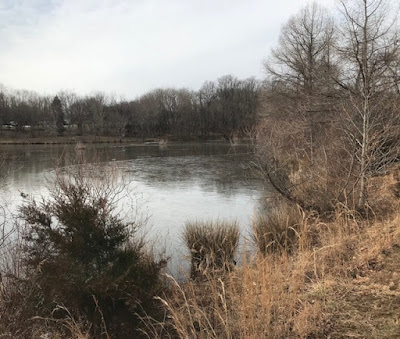 Posted by DJones at 1:37 PM No comments: 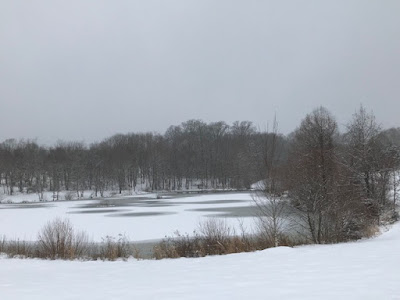 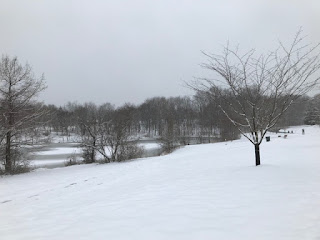 Got a couple of more inches of snow the night before. 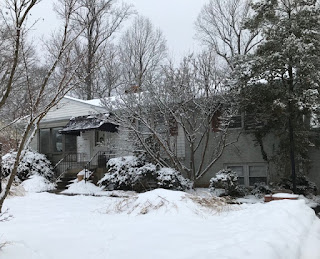 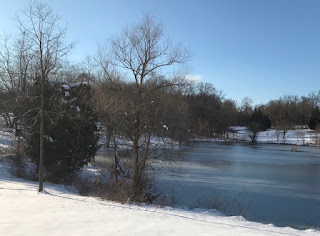 Posted by DJones at 2:59 PM No comments:

Snow started Saturday night and continued until it totaled 8-10 inches. Went walking Sunday afternoon while it was still coming down. 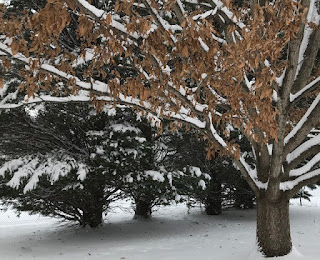 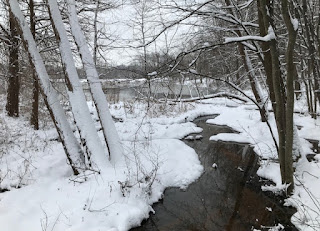 Posted by DJones at 2:56 PM No comments: