Baseball in the Park

During the season we often hear the sounds of baseball being played in the park across the street. The sound of the bat hitting the ball and the cheers that follow are nice background noises. Sunday both the softball and hardball fields were in use. 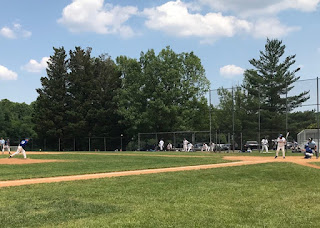 An older men's league played on the hardball field. Since many of the players appeared to be about as old as I am, I spent a bit of time watching and trying to determine how much practice I'd have to put in to play. I thought the pitching was slow enough for me to hit, but maybe I'm kidding myself. Certainly, I'd have to work on my throwing since I could damage my arm if I tried to throw as a ballplayer without gradually working up to it. It's all theoretical since I really don't plan to try.

Two Hispanic teams competed on the softball field. They were both younger and better than the older guys. The game was also much noisier since the teams brought along their own fans to root for them. 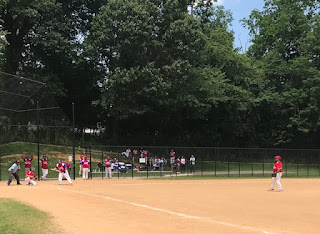