For some time my old friend Larry has suggested that I visit this museum where he has been a docent since retiring as a librarian, so last Wednesday I took the Metro downtown with him. Getting off the train at the Judiciary Square stop, you see the building right in front of you as you get off the escalator. Built between 1882 and 1887, the building's brick exterior catches your eye, and I really should have gotten a picture of it.

However, I did photograph the interior atrium which they call the Great Hall and is spectacular: 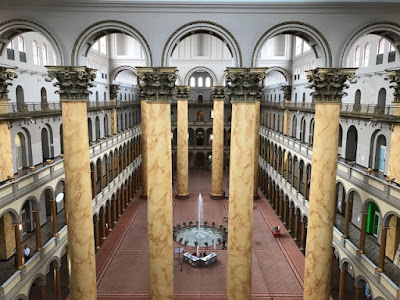 The photo taken from the top floor doesn't really do the interior justice. The Great Hall is larger than a football field and appropriately has been used for many Presidential Inauguration Balls, the first for Grover Cleveland before the building was even completed.  The building was originally constructed to house the US Pension Bureau and has been used by other government departments before being restored to serve as a museum. The original architect/engineer was Montgomery Meigs who had been a general in the Union Army during the Civil War.

Hearing about one particular exhibit finally motivated me to make this visit. The exhibit showed the history of St. Elizabeth's insane asylum where my father worked for many years. I have memories of visits there when I was a child and he brought me to work with him for various reasons, and the exhibit brought back many of those memories. I also got a sampling of some of the other exhibits, enough of a sampling to make me want to return for another visit.
Posted by DJones at 3:13 PM