Tuesday afternoon I was reading and dozing when I heard repeating banging noises which I couldn't identify. Once I was satisfied the noises weren't gun shots, I quit worrying but still was curious. Soon came the sounds of sirens, and I noticed fire engines and police cars up the street. I walked up to check out the scene and discovered firemen fighting a fire in the backyard of a house which backed up to the parkland where there is a large stand of bamboo trees. Burning bamboo apparently produces the popping noises which everyone was hearing.

According to reliable reports from neighbors, the cause of the fire was arson, and the arsonist was a resident of the house where the backyard was burning. Yesterday afternoon I revisited the site from the park and took this photo of the damage: 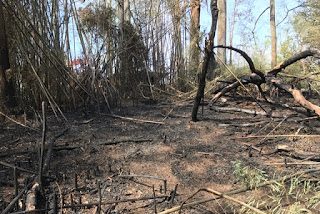 Nobody was injured and other than the trees, which appeared to be mostly on the parkland, nothing else burned. It could have been much worse. Why would a person purposely set a fire so close to their own home? We live in crazy times.
Posted by DJones at 9:10 PM