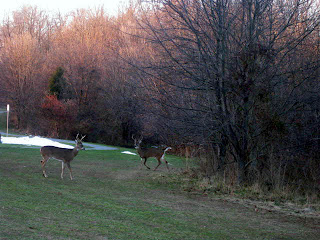 The 1 1/2 feet of snow which fell a week ago has largely melted over the past two days. It was sunny and in the 40's today, and I took advantage of the break in the weather to clear off the ornamental grasses some residual snow that was weighing down some of the stalks. I then walked to the park and counted what I estimated as about 130 Canada Geese on the pond which is a couple of acres in area, I believe. About one third of the pond was still frozen, but the geese were concentrated in the open water. Walked back over just before sunset with Pam, and we noted that the geese had left the water with their numbers split between the two nearby ball fields.

While we walked, a small doe crossed the path about twenty yards ahead of us. A few seconds later a buck crossed at the same place heading in the same direction. Then another buck followed. Unlike the doe who had proceeded to the water's edge, the two bucks stopped in a field near the small patch of woods between the path and the pond. They eyed us suspiciously as Pam moved closer to photograph them, and I urged her to back off which she reluctantly did. Although the two bucks appeared at first to be in pursuit of the doe, they did not join her near the pond and soon took off running away from the pond and us. We believe the rutting season is over, and they may have been after the doe without sex in mind. Or maybe we ruined their amorous mood. I had never seen two bucks together and thought initially that we might see them fight over the doe. Just as well they didn't because it was a neat enough sight as it was.
Posted by DJones at 7:34 PM