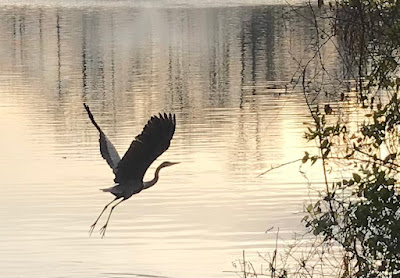 Over the years, I've posted many photos of Great Blue Herons but I believe this is the first of one in flight. When I was fishing a great deal I'd often find myself sharing the water with them, and because we were there for the same reason I've felt a certain kinship with them. Generally, herons are less tolerance of our presence than we are to theirs, but I suppose this is understandable as they are in and around water for a more serious reason than we are. They're there for food; it's how they make their living.

Once when fishing the upper Potomac river, I encountered one who ignored me even though I was fishing close by. Normally, however, if I got within about fifty feet of a Great Blue Heron he would fly off and express his displeasure with a cranky-sounding screech. At the pond in the park the big birds seem to tolerate my passing by much closer but become uneasy if I stop. That's what happened with this one who flew as soon as I raised my phone camera to my eye.

Whether still or in motion they are magnificent birds.